The Mets earned a split against the Braves and a winning homestand.

Share All sharing options for: Mets vs Braves Recap: Zack Wheeler not great, but good enough as Mets top Braves

"Home is where the heart is."

That saying gets thrown out quite a bit, but for the Mets this year, it hasn't been the case. Rather, "home" has been host to a lot of pain for the Mets this season and, more importantly, losses. The Mets entered today's game with a 20-30 home record, second worst in the majors. However, they also entered with a chance to earn a split against the Atlanta Braves and end their homestand at 4-3. The Mets were able to accomplish that, beating the Braves 7-4 on a Thursday afternoon at Citi Field. 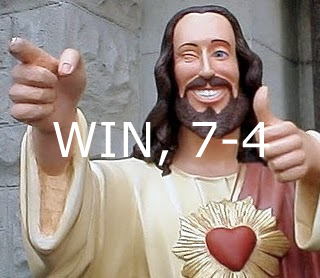 Zack Wheeler got the start, looking to rebound from his last start against the Philadelphia Phillies on Saturday where he couldn't even make it out of the fifth inning. Wheeler's first inning started well off enough, as he induced a groundout from Andrelton Simmons, and after a Reed Johnson double, he was able to strike out Justin Upton on a 95 mph fastball up and in. However, he walked Freddie Freeman with two outs, bringing up Evan Gattis. The inning seemed like it end without any trouble after Wheeler got him to swing at a curveball in the dirt, but the pitch got away from John Buck and to the left of him. Buck foolishly threw the ball to first, which bounced off Gattis, hit Josh Satin in the face and rolled away from him, allowing Reed Johnson to score from second, making it 1-0 Atlanta. The deficit would stay at one though, as Wheeler got Uggla to strike out swinging to end the frame.

Rookie left-hander Alex Wood, replacing the injured Paul Maholm, blew away Eric Young Jr. and Daniel Murphy to begin the inning, and after a David Wright single, retired Marlon Byrd on a flyout to end the inning.

Wood would run into trouble in the bottom of the second, as he allowed consecutive hits to Satin and Justin Turner to begin the inning. However, he was able to strike out Buck and Juan Lagares, and then retired Wheeler on a groundout to end the frame.

The third inning would see Wood's fortunes take a turn for the worse. With Jason Heyward being given the day off, the Braves somehow came up with the idea that Gattis, a natural catcher, could play left field. This decision would cost them dearly. After Young Jr. led off the inning with an infield hit, Murphy hit a flyball to left that dropped in front of Gattis, a ball a more experienced left fielder would have likely caught. After Wright flew out, Byrd came up, and on a 1-0 count, ripped a line drive to left field, scoring Young Jr. from third and making it 1-1. The play didn't end there as Gattis mishandled the ball, allowing Murphy and Byrd to move up a base. Satin drew a walk, and with one out, Turner hit a weak groundout that scored Murphy and moved Byrd and Satin to second and third, making it 2-1 Mets. With two outs, Buck hit a single past Chris Johnson, scoring Byrd and Satin and making it 4-1. Another Gattis misplay allowed Buck to move to second, which spurned the Braves to intentionally walk Lagares. Like the second inning, Wheeler ended the rally by grounding out.

The fourth brought bad news for the Mets, who saw Young Jr. leave with a right knee sprain, and Wheeler. After retiring seven consecutive batters, Wheeler allowed a leadoff hit to Freeman and after getting Gattis to pop out, allowed a line drive homerun to Uggla, which hit the railing above the orange line in left, making it 4-3. Wheeler would make it through the rest of the inning without any more runs scoring and not much else happened until the bottom of the fifth.

The Braves decided to play a shift against Byrd and it cost them, as he hit a squibber through the right side to lead off the fifth. After Satin popped up, Turner hit a grounder towards first that looked like it would be a double play. However, Freeman let it roll past his glove and down the line, putting runners at second and third with one out. This would end Wood's afternoon, as the Braves decided to bring in Kameron Loe, who had a 7.31 ERA coming in and was on his third organization of the year. However, the Mets were unable to capitalize as Buck swung at the first pitch he saw, a ball inside, and popped up weakly to Loe. After another intentional walk of Lagares, Wheeler would once again end an inning with a groundout.

The missed opportunity would cost the Mets, as Freeman led off the top of the sixth with a long homerun to center, hitting to the right of the apple and making it 4-4. The homer marked the seventh Wheeler has given up in 38.2 innings this season. After hitting Uggla with one out, Wheeler induced a groundball double play from Johnson, ending the inning and his afternoon.

In the bottom of the sixth, the Braves decided to keep in Loe. They were less "tempting" fate, and more "hitting it with a bag of rocks". Fate would respond in kind. Andrew Brown, Young Jr.'s replacement, ripped the first pitch he saw from Loe off the wall in left for a leadoff double. After a wild pitch allowed Brown to move to third, Murphy singled past the drawn -in infield, making it 5-4 Mets and giving the team a lead they would not relinquish.

David Wright followed with a booming shot to left center that bounced off the warning track. Confusion ensued as the ball appeared to hit the railing as it bounced up. However, the umpires did not call it a ground rule double, and while Johnson and Gattis were holding up their arms and pleading their case, Murphy scored all the way from first and Wright made it to third, making it 6-4. Thanks to the #humanelement, the Braves were unable to get a review of the play and Fredi Gonzalez was ejected after arguing the call.

Loe appeared to settle down by striking out Byrd and Turner after an intentional walk of Satin. However, Buck would give the Mets another run with an RBI double, making it 7-4 Mets.

David Aardsma pitched a scoreless top of the seventh and LaTroy Hawkins followed with a scoreless eighth inning. The Mets threatened to tack on in the bottom of the eight, as they loaded the bases with two outs for Kirk Nieuwenhuis. However Braves reliever David Carpenter would get Niewenhuis looking to end the inning.

In the top of the ninth, Mets closer Bobby Parnell opened the inning with a strikeout of Uggla. Johnson singled with one out, but instead of pinch-hitting Heyward, the Braves let Laird bat. Laird hit a grounder to Wright, which bounced in front of him but he managed to recover and get the out at first. Heyward batted with two out, but on a 1-2 pitch, Heyward hit a flyball to Byrd in right, ending the contest.

The Mets begin a four-game series tomorrow with the Washington Nationals. Jenrry Mejia faces Jordan Zimmermann in the first half of a day/night doubleheader at 1:35 pm EDT on SNY. 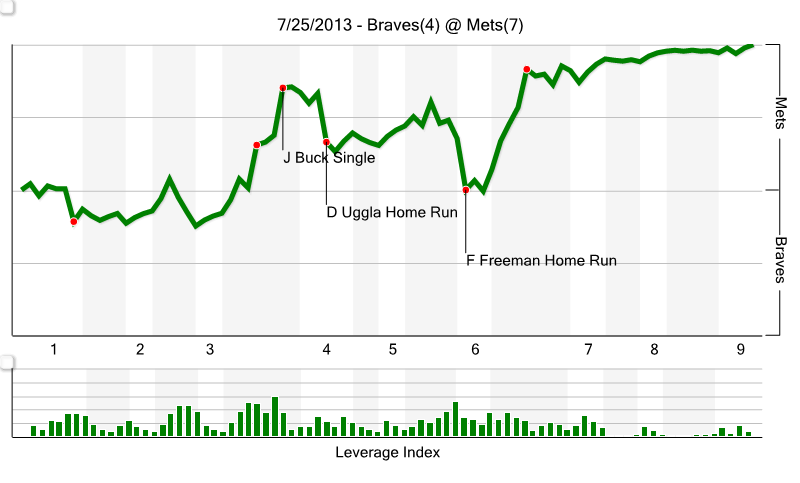