Mets vs. Nationals Recap: Mets pitchers give up fourteen runs in blowout loss

The Mets were blown out by the Nationals as they dropped their third straight game.

Share All sharing options for: Mets vs. Nationals Recap: Mets pitchers give up fourteen runs in blowout loss

The Mets wrapped up a four-game weekend series against the Nationals with an incredibly lopsided loss this afternoon. In his third start of the season, Carlos Torres gave up a staggering eight runs in three innings of work, and the Mets never even came close to coming back.

The game was scoreless until the bottom of the second inning. After recording an out to start the inning, Torres gave up a double and a single. With runners on the corners, Wilson Ramos singled to put the Nationals on the board. Washington pitcher Taylor Jordan gave himself up on a sacrifice bunt, and Torres had a chance to escape the inning with minimal damage as Bryce Harper came to the plate. But Harper singled to drive in both baserunners, and the Nationals had an early three-run lead. Torres retired Anthony Rendon to finally end the inning, but things got worse in the third.

Ryan Zimmerman led off with a double, and after recording an out, Torres walked Jayson Werth. An Ian Desmond single brought Zimmerman home, and a Denard Span single loaded the bases. Wilson Ramos then hit a grand slam, putting the Nationals ahead 8-0. With that, the game was virtually over.

Marlon Byrd drove in the Mets’ only run of the game in the fourth inning with a single that plated Eric Young Jr. In total, Taylor Jordan threw six innings, struck out seven Mets, and walked just one.

Gonzalez Germen took over for Torres in the fourth inning and gave up two runs in that inning. He came back out for the fifth and didn’t allow any more runs, at least, but none of Germen’s six outs were strikeouts.

David Aardsma came on to pitch the sixth and gave up three runs, two of which scored on a home run by Denard Span, who had just one home run in 424 plate appearances coming into the game.

Josh Edgin threw a scoreless seventh inning and was the only Mets pitcher who didn’t allow a run today. Bobby Parnell gave up the Nationals’ fourteenth and—mercifully—final run of the afternoon on a triple in the ninth inning. The Nationals’ third base coach didn’t even really want to send the runner home on the play, but it was so easy for him to score that he wound up doing so anyways.

With the loss, the Mets dropped three of four in Washington and will head to Miami for a three-game set starting tomorrow night. Jeremy Hefner is scheduled to start opposite Jacob Turner in the first game. 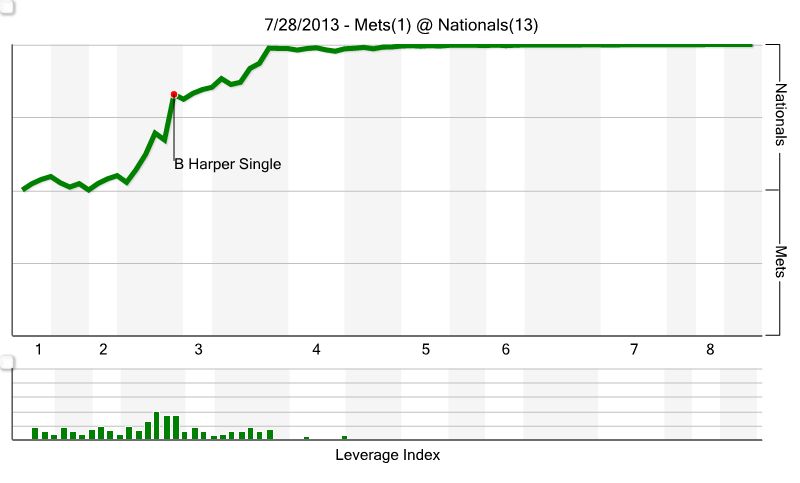