Simply put, the 51s pummelled the Fresno Grizzlies. Chris Schwinden had a solid outing, but this game was all about Las Vegas' offense. Ike Davis started things off by going yard in the 1st inning, and the 51s didn't look back from there. In the 3rd, Wilmer Flores doubled, and then came home to score on a wild pitch and passed ball. In the 4th, the 51s scored four runs on three hits, a walk, and a fielding error. In the 6th, Brandon Hicks laced an RBI single. In the 7th, the 51s scored three runs, notching another five hits and drawing another walk. In the 8th, the 51s scored a run on a Juan Centeno double. Excluding pinch hitters, every Las Vegas starter notched at least one hit except for Matt den Dekker- but the centerfielder walked three times and didn't strike out on the night, so that development is perhaps even better for the swing-happy den Dekker. Robert Carson came into finish the game, and had a very Rob Carson night, allowing two hits and striking out two. But, he got the job done.

This game began Monday, but was suspended in the bottom of the first because of rain. On Monday, Erik Goeddel walked a batter and struck out three in his abbreviated start. When the contest continued last night, Darin Gorski took the mound. In the top of the 3rd, he allowed two runs to score, and given that the Curve had Jameson Taillon on the mound, that could've been the game. Binghamton cought a break, as the Canadian super prospect wasn't completely on point. In the bottom of the 5th, his last inning of work, he gave up a solo Blake Forsythe home run, and a Danny Muno RBI single that tied the game. In the bottom of the 6th, Binghamton scored another two despite the fact that reliever Quinton Miller struck three batters- Darrell Ceciliani wiffed, but the ball got away from catcher Carlos Paulino and the inning continued. Wilfredo Tovar then took one for the team and got hit with a pitch, loading the bases. The next two batters, pinch hitter Rhyne Hughes and Danny Muno drew walks, forcing in two runs- the go ahead run and an insurance run. John Church and Pedro Feliciano navigated around a little danger in the 7th and 8th innings, and Jeff Walters shut Altoona down in the 9th to record his 21st save, and help Binghamton win their league-leading 51st game.

The Sand Gnats ran into the buzzsaw that is Joey Gallo. The Rangers' 2012 first-round draft pick slugged two home runs and drove in 7 of 9 Crawdad runs. Early on in the contest, we actually had ourselves a game. Going into the 6th inning, the score was 2-1, Hickory. In the top of the 7th, left fielder Nick Williams tripled off Gabriel Ynoa to start off the inning. After allowing a walk to his next batter, he was yanked from the game and replaced by Julian Hilario. One walk and one Frank Viola ejection later, Gallo came to the plate, and clubbed his 24th home run of the season, a grand slam. In the top of the 9th, Gallo hit another home run, this one of the more mundane three-run variety, off of Wanel Mesa. Albert Cordero drove in a run in the bottom of the 9th, but any thoughts of a rally died quickly, as the game ended one batter later.

Another loss to Staten Island in the ‘Ferry Series', and the Cyclones continue to struggle out of the game, dropping their fourth in a row. John Gant got the start for Brooklyn, and things got off to a rocky start, as he allowed three runs in the 1st inning on a Yeicok Calderon home run. Gant got his things together after that inning- he allowed just one more hit (unfortunatley, it scored an unearned run) and one more walk over the next four innings, while striking out seven batters. The Cyclones offense was unable to take advantage of their starter righting the ship, as they were shut out by Yankees starter Giovanny Gallegos for five innings and by reliever Cale Coshow for another inning. Finally, in the top of the 7th, the Cyclones cought a break on a comedy of Staten Island errors and misplays- Coshow walked James Roche, who moved to second on a balk, and stole third. Third baseman Anthony Chavez singled a to left that scored Roche. Staten Island left fielder Mikeson Oliberto misplayed the ball and let it get behind him. When the ball was finally recovered, Yankees shortstop Jose Rosario threw it away, allowing Chavez to come all the way home. Unfortunatley, fate would not be so kind to Brooklyn in the 8th and 9th innings. Despite having men on the corners in the 8th, and loading the bases in the 9th, Brooklyn was unable to plate any runners and catch up to their rivals. 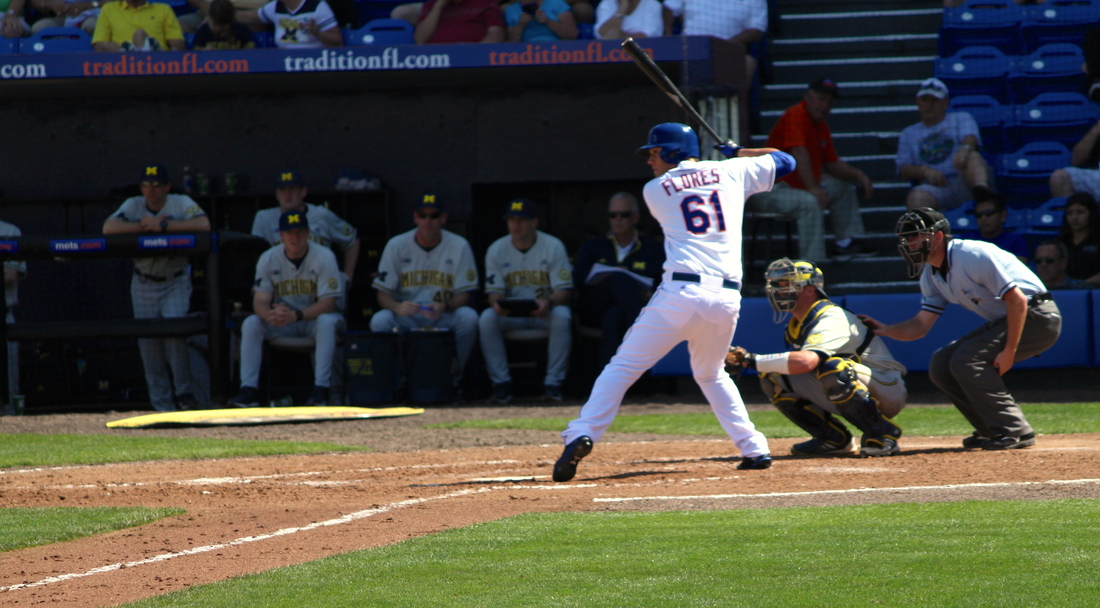 John Gant racked up the strikeouts, Danny Muno went three-for-three with a walk and a stolen base, and Matt den Dekker walked three times and stole a base, but Wilmer Flores had a monster night at the plate, hitting two doubles and three singles on a five-for-six night. He's our Star of the Night.

There weren't too many standouts for the dishonors last night, so I'll have to go with something more minor. Julian Hilario gets to wear the goat horns simply because two of the runs that scored when he allowed that grand slam were charged to Gabriel Ynoa in addition to himself.