Matt Harvey threw eight excellent innings against the Nationals on Friday night and is still contending for the National League Cy Young Award.

On Friday night in Washington, Matt Harvey was once again dominant. In eight innings, he gave up just one unearned run, struck out seven, and walked one. Of his 99 pitches, 66 were strikes. His game score was 76—which tied for his sixth-best start of the year—and, as always, he generated several swinging strikes.

Harvey touched 100 mph with his fastball, which has become a fairly normal occurrence in his starts over the past few weeks. His curve didn't generate any swinging strikes, but Harvey probably knew it wasn't working too well since he used it the least of any of his off-speed pitches. His slider, though, was still incredible.

There aren't quite as many yellow boxes for swinging strikes in the plot below, but it's still a pleasant sight. 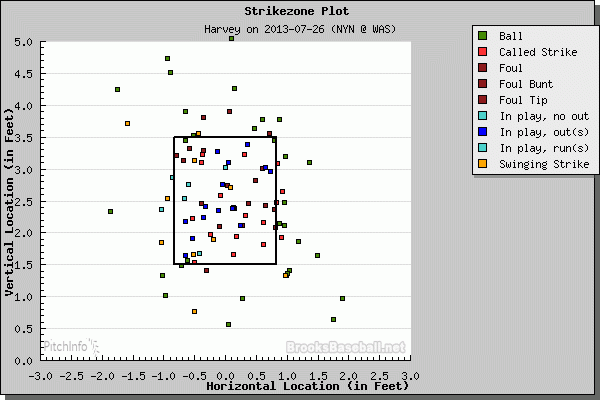 Only Claytown Kershaw has a lower ERA than Harvey this year, but Harvey's league-best FIP suggests he's performed even better than Kershaw. At the moment, it appears to be a three-man race, with Adam Wainwright rounding out the group. Francisco Liriano has been outstanding this year, too, but he's not qualified for the leader boards as he's thrown just 95.2 innings.

R.A. Dickey had a truly great year last year, and Harvey's been even better this year. The odds of catching up to Dwight Gooden's ERA are incredibly slim, but matching Tom Seaver's mark in 1973—he finished at 2.08—would still be remarkable.