Juan Lagares and John Buck each drove in a pair of runs, and Zack Wheeler made the best start of his young big league career as the Mets beat the Marlins.

Zack Wheeler’s eighth big league start was the best one yet, and the Mets were—very surprisingly—able to win an extra-inning game in Miami on Tuesday night. After struggling against the Marlins all year, the first two of the Mets’ four games in Miami this week really couldn’t have gone much better.

Wheeler looked good in the early going, as he worked much more efficiently through the first three innings than he has in any of his other starts with the Mets. He threw plenty of first-pitch strikes and rarely missed the strike zone, two things he didn’t do consistently in his previous starts.

With the game scoreless in the fourth, the Mets took the lead. David Wright led off with a double and moved to third on a flyball out by Marlon Byrd. Ike Davis popped out, but John Buck drew a walk. With runners on the corners, Juan Lagares tripled to score them both and put the Mets in front. Lagares is now hitting .275/.307/.413 for the year, which isn’t outstanding, but it’s a lot better than his triple-slash line looked just a few weeks ago.

Wheeler cruised through the sixth inning and did not allow a hit until the seventh. Once he did, however, the Marlins wasted no time in scoring a pair of runs. Wheeler got through the inning with the game tied to wrap up a still-very-good night. He threw just 87 pitches, 64 of which were strikes, and he notched first-pitch strikes on 19 of the 26 Marlins he faced. John Buck was a fan of his stuff.

The Mets didn’t score in the next two innings, but LaTroy Hawkins and Scott Atchison each threw a scoreless frame to send the game to extras. The Mets—shockingly—didn’t take long to reclaim a lead after that.

David Wright once again got the inning started, this time with a single. Marlon Byrd followed up with a single of his own, and Ike Davis walked to load the bases. John Buck then hit a single to score Wright and Byrd. Despite the still-favorable situation, the Mets’ lineup didn’t tack on any insurance runs, but it didn’t matter too much in the end.

Bobby Parnell came on for the bottom of the tenth inning and retired three of the four opposing hitters he faced. Only Christian Yelich reached base on a walk in the scoreless inning as Parnell finished off the Mets’ victory.

The series continues tomorrow at 7:10 pm EDT. Jenrry Mejia makes his second big league start of the year for the Mets. 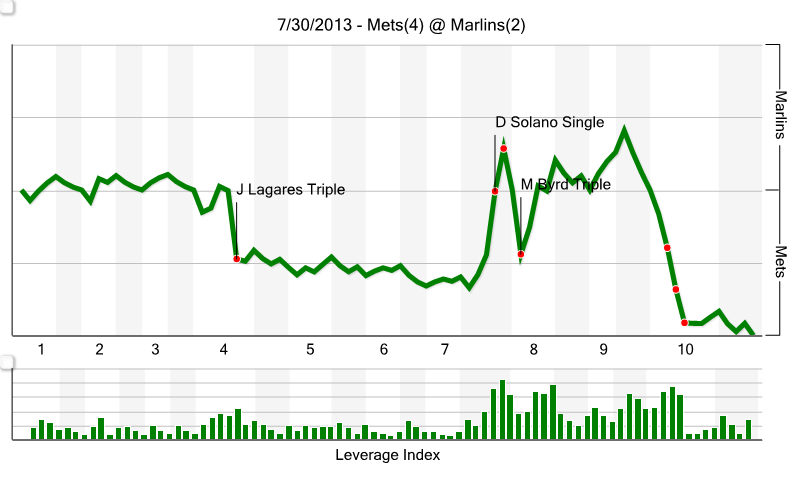