Matt Harvey's shakiest outing of the season was capped by a three-run homer by the infamous Cody Ross, as the Diamondbacks defeated the Mets 5-3

The start of tonight's game was pushed back by a rain delay of nearly two hours, but the prospect of Matt Harvey and fireworks kept a healthy crowd around for first pitch. It was hard to tell if the delay messed with Harvey's routine or if he was simply geeked up for a big crowd, but in either case found himself in a rare spot of first inning trouble that began when Aaron Hill poked a one-out single past the shortstop. Eric Chavez followed with his own bloop single to put runners on the corners, and Miguel Montero was lost to a walk that loaded the bases. The crisis was averted when Harvey induced an inning-ending GIDP from Martin Prado.

The second inning went more to form as Harvey struck out the side in order, dispatching each batter with a different swing-and-miss pitch (curve, fastball, slider in succession). In the third, he added two more Ks while working around a two-out error by David Wright. Montero started the fourth with a single up the middle but nothing else as Harvey benefited from a grounder, a strikeout, and an amazing play by Omar Quintanilla to turn a sure single up the middle by Cody Ross into a fielder's choice. 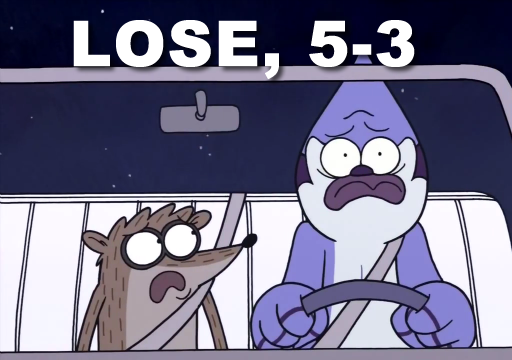 In other words, the evening was proceeding as Harvey Days often do. Unfortunately, Harvey Days include the offensive anemia of his teammates. In the bottom of the first,a leadoff infield single from Eric Young Jr. went for nought after a Daniel Murphy pop up and a groundball double play from Wright. In the second, a leadoff single from Marlon Byrd was negated by a popup and two strikeouts. Two more Ks and a groundout added up to a 1-2-3 third inning.

In the bottom of the fourth, Murphy belted what looked like a sure leadoff double, but was nailed by a great throw from center as he slid into second. (Murph may have been safe, but the throw beat him, which is all that counts for most umps.) Wright attempted to make up for it by belting a towering solo shot down the line in left, finally giving Harvey a slim lead to work with. One out later, Josh Satin went deep for his first major league homer, crushing the ball to almost the same spot as Wright's dinger. HAIL!

This is the point in the Harvey Day script where Harvey closes the door on the opposition once given a lead. Tonight, this part of the script was underwritten. He negotiated the top of the fifth with little trouble, but in the sixth, he found trouble when Montero turned a long at bat that elevated his pitch count and resulted in a walk. Montero's lengthy plate appearance would prove to be the turning point of the game.

Prado followed with a single, putting two men on with one out. All looked well when Harvey fanned Jason Kubel for the third time in the game, but that brought Cody Ross to the plate. You may remember Cody Ross from such atrocities as Every Mets-Marlins Game in 2007 and 2008. You may also remember him for hating Mike Pelfrey for some reason. (Granted, we all hated Pelfrey at some point.) Tonight Ross reprised his role as History's Greatest Monster by turning on a hanging slider and blasting it just over the left field fence for a three-run homer. It was the first three-run homer Harvey had given up in his young career, and of course Cody Ross would be the one to hit it.

Harvey struck out Delgado to close out the sixth, his ninth K of the game, but he was now on the losing side of a 3-2 score, had 100 pitches under his belt, and was clearly struggling. And yet, Harvey was allowed to take the hill to start the top of the seventh, which I assume was partly due to his bulldog mentality and partly due to Terry Collins being very bad at his job.

Harvey looked very un-Harvey like as he walked leadoff man Tony Campana on a close pitch, ceded a bloop single to Aaron Hill, and allowed a long double off the wall to Eric Chavez beyond the reach of a leaping Young. (Leaping Young turned into a Crumpled Young when he crashed into the fence and collapsed on the warning track, but he was okay.) Chavez's double brought Campana in with another run and brought the curtain down on Harvey's outing.

Scott Rice was the first man out of the pen, and he turned in a Rice-ian outing, allowing an RBI sac fly and walking two to load the bases before David Aardsma entered the fray. Aardsma stopped the bleeding there via a popup and a strikeout, but the deficit was now up to three whole runs.

That would be a steep mountain to climb, because after the two-run fourth inning, the Mets offense reverted to its sleepwalking ways, turning in some pathetic at bats against an opposing pitcher who did not warrant such genuflecting. Randall Delgado might be a very nice person, but he isn't Greg Maddux, and yet the Mets hitters approached him as such, allowing him to breeze through this outing while expending a minimum of pitches. Mets bats were retired in order in the fifth, while a leadoff single in the sixth and one-out single in the seventh were both wasted.

After Josh Edgin retired Arizona in order in the top of the eighth on only six pitches, the first two Mets went quietly in the bottom half against reliever David Hernandez. Then, Murphy killed a baseball, driving it almost to the Shea Bridge for a solo homer. Wright followed with a long double, and a comeback was envisioned by the hefty crowd still on hand. Marlon Byrd drove such thoughts out of the spectators' minds with a popup to shallow left to end the inning.

The ninth was handled quietly by Edgin and Bobby Parnell. (He lives!) With the recently reactivated ex-Met JJ Putz deemed unfit for closing, it was up to another ex-Met, Heath Bell, to close the door on the Amazins. Bell has known to be combustible, but apart from a two-out single by John Buck, he sent the Mets off into that good night with little trouble, and the home team went down by the score of 5-3.

This was easily Harvey's worst outing of the season thus far. Blame fireworks or rain if you must, but we all know the real culprit is Cody Ross, who dared ruin Harvey Day on the same calendar date as fireworks night and practically on the same day as the Fourth of July. Which means that Cody Ross not only hates the Mets, but also hates America, the troops, and joy itself.

So when you're pondering the idea of right and wrong, wondering if karma is real or if there is any great bar of justice that meets out judgments fairly in this universe, consider this: Cody Ross has a World Series ring. Enjoy your holiday! I know it'll be hard if you're thinking about that all day, but try! 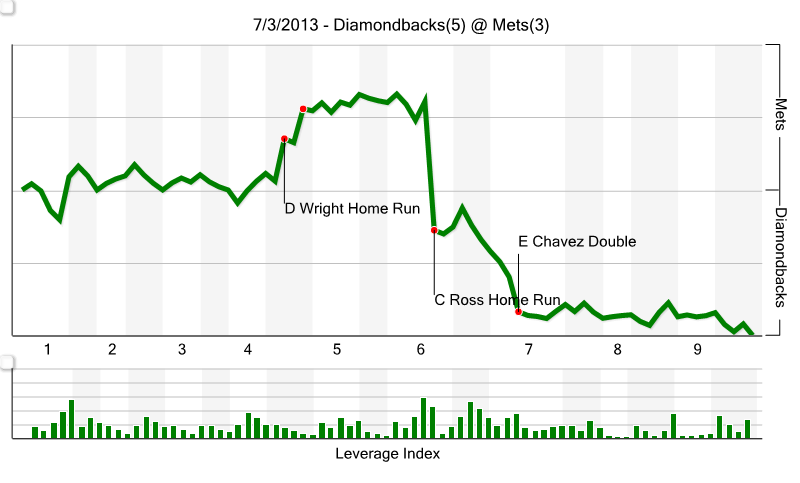