The Mets and Diamondbacks played for nearly six hours on Independence Day, and the Mets lost in fifteen innings.

It has been apparent for quite some time that the Mets are in the midst of rebuilding. The team has never used that word publicly, but that shouldn’t really matter. Since Sandy Alderson and company took over before the 2011 season, the focus has been on the Mets’ long-term future. 2013 was supposed to be a bridge year. It would be nice, however, if the Mets could stop playing incredibly long games and losing, which they did again this afternoon as they hosted the Arizona Diamondbacks.

The early half of the game went fairly well for the Mets. They scored first with a run in the fourth inning as David Wright doubled, moved to third on a wild pitch, and scored on a ground out by Marlon Byrd.

Dillon Gee walked leadoff hitter Cody Ross in the fifth inning, and Gerardo Parra bunted for a double, an incredibly rare occurrence. Parra pushed the ball through the first base side of the infield as Josh Satin retreated to the bag and Daniel Murphy couldn’t get to the ball until Parra was well on his way to second base. Wil Nieves came to the plate next and singled to drive in both baserunners, giving Arizona a 2-1 lead. Gee got through the rest of the inning without further damage.

In the bottom of the fifth, Omar Quintanilla hit a one-out double. After Juan Lagares struck out for the second out of the inning, Gee singled to bring Quintanilla home and tie the game. From there, both teams stopped scoring runs for a long time.

Gee threw seven innings, allowed just the two runs in the fifth inning, and struck out seven while walking only two. In his last seven starts, Gee has a 2.47 ERA with 47 strikeouts and 9 walks in 47.1 innings. He now has a 4.45 ERA and 4.13 FIP on the season, both of which are an incredible improvement upon the numbers he had before his twelve-strikeout start at Yankee Stadium at the end of May.

With Gee out of the game after seven innings, the Mets’ bullpen was excellent for the next five. LaTroy Hawkins threw a scoreless eighth inning and struck out the side. For the season, he has a 2.97 ERA and 3.33 FIP, both of which are significantly better than that average for National League relief pitchers.

Bobby Parnell struck out two in a scoreless ninth inning, and Carlos Torres allowed just two hits with three strikeouts and no walks in three scoreless innings. Unfortunately, the Mets’ bats weren’t doing much of anything against Arizona’s bullpen, either.

Arizona broke the tie in the top of the fourteenth inning against David Aardsma, who allowed a single to Martin Prado and a double to Paul Goldschmidt before intentionally walking Eric Chavez to load the bases. He then unintentionally walked Cody Ross to put the Diamondbacks ahead 3-2.

Josh Edgin took over after the walk and induced a 3-2-3 double play from Gerardo Parra, thanks in part to the fact that Parra was called out for interference when Anthony Recker’s throw to first base hit him outside of the basepath. Terry Collins then called upon Brandon Lyon, who allowed a single to Wil Nieves, but Chavez was thrown out at home plate by Marlon Byrd to end the inning.

Heath Bell pitched the bottom of the thirteenth and retired the first two batters he faced, but Recker hit a solo home run to tie the game and force a fourteenth inning.

Lyon stayed in for the Mets and gave up a run on a two-out single by Prado in the top of the fourteenth, but the Mets once again tied the game on a solo home run in the bottom half, this time hit by Kirk Nieuwenhuis. But the Mets couldn’t win the game despite getting a couple more baserunners after the home run, and it wound up costing them.

Scott Rice came in to pitch the fifteenth, and after recording two outs to start the inning, Gerardo Parra singled against him. Although the batters following Parra were not left-handed, Rice stayed in the game. Gonzalez Germen, who is right-handed and hasn’t been used since he was recalled earlier this week, remained in the Mets’ bullpen. A pair of singles later, the Diamondbacks plated a run to take a 5-4 lead. Rice struck out pinch hitter Miguel Montero to end the inning, but the damage had been done.

Brad Ziegler came in to pitch the bottom of the fifteenth and was all over the place, though he got some very favorable calls on balls and strikes from the home plate umpire. He walked two of the first three batters he faced, but Jordany Valdespin and Kirk Nieuwenhuis each grounded out to end the game.

The Mets begin a three-game series in Milawukee on Friday night. Zack Wheeler is scheduled to make his fourth major league start at 8:10 pm EDT. 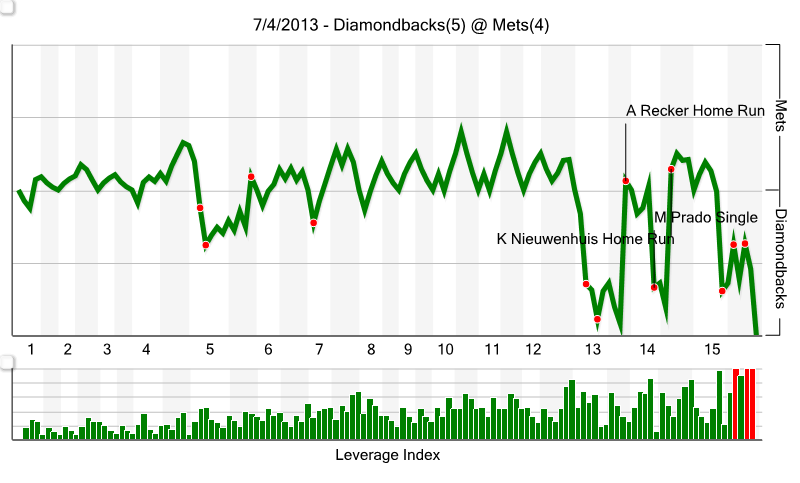