Over his last two starts, Matt Harvey racked up 20 strikeouts against the Nationals and Diamondbacks.

Matt Harvey's seventeenth start of the season was one of the best he's ever thrown in the big leagues. His eighteenth wasn't terrible, but he appeared to run out of gas late in the start and went from not having given up a run to giving up five runs pretty quickly.

For the third straight start, Harvey hit triple digits with his fastball, which he threw the majority of the time with great success. He hardly used his changeup, but both his curveball and slider were very effective, each generating several swings-and-misses. The plot below illustrates Harvey's whiffs, which came high in the zone, right in the middle of the zone, and well below it. 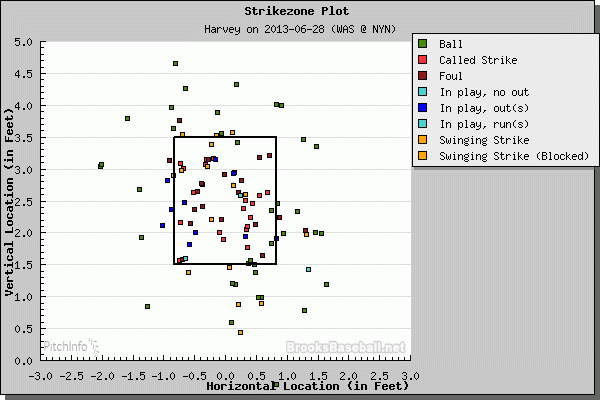 Harvey didn't hit 100 mph in the start, but he came pretty close as his fastball was clocked just about 99 mph. Once again, he relied most heavily on his fastball, but he mixed his changeup in a bit more frequently to go with the curves and sliders. Every pitch he threw was fantastic in terms of generating whiffs, but his slider was the best with a staggering 44.44 percent swinging strike rate. Once again, the plot below shows swings-and-misses all over the strike zone. The results in this start weren't as good, but Harvey was just as dominant for most of it as he was in his start against the Nationals. 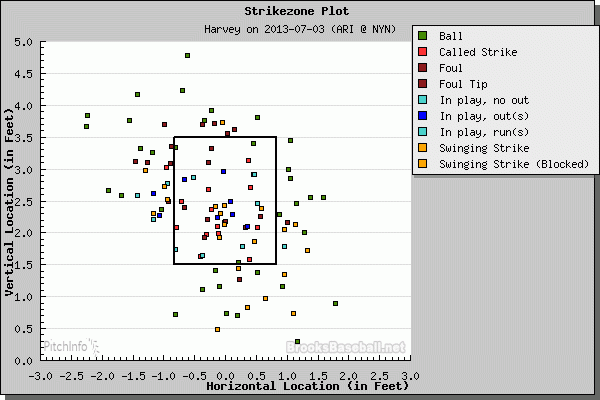 With the slight bump in Harvey's ERA in his most recent start, he fell a few spots in the rankings among National League starting pitchers. In every other category below, he remains at an elite level. The fact that Harvey has the thirteenth-best walk rate is very impressive given the fact that he leads in the league in swinging strike rate and strikeout rate.

With his seventeenth and eighteenth starts in the books, Harvey is still very close to the pace set by three former MEts pitchers in their Cy Young seasons.