Jacob deGrom had his first clunker since being ambitiously promoted to AAA. The right-hander got knocked around in the 2nd inning, as the Tucson Padres scored five runs off of five hits- three consecutive singles to load the bases, a double to pitcher Sean O'Sullivan, and a three-run homer. He also ran into a little trouble in the bottom of the 4th that ended with Tucson scoring another run. Wally Backman left deGrom in, so I guess that says something about how the team views his mental toughness. The 51s scored a run in the top of the 3rd, tacking on to the run that Zach Lutz scored in the 2nd with a solo home run. In the 5th, the 51s chained together a triple and two singles that scored another two runs, so going into the 6th inning, Tucson was up 6-4. In the 9th inning, Brandon Hicks hit a solo homer to put Las Vegas within one, but Padres reliever Miles Mikolas was able to hang on and get his team the victory.

I can't really say I agree with this, since it's hard to imagine that a hitter "fixes" his swing and/or approach at the plate in less than 100 plate apperances during actual games, but the results clearly were there for Davis: In 21 games/ 92 plate appearances, the beleaguered slugger hit .293/.424/.667 with a 17:18 BB:K ratio. Let's all hope that he is able to keep up both the hot hitting and the plate dicipline. Likewise, Josh Satin certainly made the most of the limited playing time he was afforded, and it would be sad to see him casually tossed aside.

Logan Verrett didn't show any particularl problems leading up to it, but in the third inning, he completely lost it. It took Verrett 34 pitches to get notch two outs. In the inbetween, he allowed two walks, three singles, and four runs, of which three were earned. Jim Fuller came in to relieve the laboring right-hander, and fired off three-plus scoreless, hitless innings of relief. Fuller really kept Binghamton in the game, and gave the team the opportunity to come back, an opportunity the offense did not squander. In the top of the 5th, Binghamton put up a four spot of their own, with Danny Muno going yard and smacking a moon shot of a grand slam over the right field walls. In the top of the 6th, Binghamton went ahead, with Danny Muno doing it yet again, and hitting another home run, this one of the three-run variety. The Fisher Cats almost forced the game to extra innings, but an exciting play ended the game. In the top of the 8th, New Hampshire scored a run on a Wilfredo Tovar throwing error, so the score was 7-5 going into the 9th inning. Pedro Feliciano recorded the first out, striking out the only batter he faced in the inning. Closer Jeff Walters was then brought in to end the game. He allowed a single and a double before recording his first out, the second out of the inning. With men on second and third, Fisher Cat third baseman Andy Burns laced a frozen rope into right field. The man on third scored, and the man on second was running like there was no tomorrow, determined to score as well. Cesar Puello threw a seed to home plate from the outfield, gunning down the potential tying run with two out in the 9th inning to end the game. He does it all, folks.

St. Lucie and Jupiter played an evenly matched ballgame, but in the end, there can only be one winner, and St. Lucie simply displayed more of the will to win than Jupiter. Either that, or they scored more runs than the Hammerheads. The Mets got on the board first, scoring two runs in the bottom of the 2nd. Matt Reynolds scored a run on a sacrifice fly, and Charley Thurber singled up the middle to make it 2-0. No sooner did Hansel Robles get the ball in the top of the inning, the Hammerheads tied the game. With a man on, top prospect and two-time Marlins Minor League Player of the Year Christian Yelich launced a ball over the left field wall. Both starting pitchers were removed a few innings later, making the game a battle of bullpens. In the bottom of the 6th, Hammerhead reliever Miguel Fermin walked Jayce Boyd and allowed a Dustin Lawley double. Kevin Plawecki came to the plate, and although he didn't do something flashy, like hit his second double of the game, or launch a home run, he did get the job done, grounding out to the shortstop. Chasen Bradford, Bret Mitchell, and T.J. Chism combined to throw four-plus innings of excellent relief. The three relievers did not allow a single hit, walked only one batter, and struck out seven.

The Cyclones' struggles continue, as they fell to the Aberdeen IronBirds 5-1. Brooklyn starter Seth Lugo had trouble with the long ball, giving up two home runs to third baseman Hector Veloz, a solo shot in the bottom of the 2nd, and a three run blast in the bottom of the 4th. Aberdeen starter Mitch Horacek, or the relievers that followed him, had no such problems. Horacek limited the Cyclones to a single hit during the four innings he pitched, a Jorge Rivero double to leadoff the game. David Richardson relieved Horacek and was not as sharp, allowing two doubles and a run in the 5th inning. In two more innings, Richardson would allow one hit each, both singles, and his replacement, Jorge Rivera, allowed none, providing a precious few opportunities for the Cylones to tie the game.

No, that's not a typo. Kingsport beat the Johnson City Cardinals 20 to 4. Until the 7th inning, we actually had a somewhat competitive game. Familiar with Pedro Perez? No? Pedro Perez figured, and to make sure he gets his name out, the 18-year-old Colombian decided to hit not only one, but two three-run home runs, one in the 2nd and one in the 6th. . Not only did those two home runs account for six of Kingsport's seven runs up until that point, but they also matched Perez's career highs in home runs, matching his 2011 season in the Dominican Summer League, where he went yard twice in 210 at-bats. In the 7th inning, the contest went from ‘game' to ‘route'. Kingsport scored eight runs in the 7th inning. In that inning, the team hit four singles, two doubles, walked twice, and got a little help by a fielding error and a wild pitch. Rightfielder Michael Bernal added a solo home run in the 8th, negating one of the run Johnson City scored in the bottom of the 7th. When Johnson City scored two more runs in the bottom of the 8th, the Kingsport Mets seemingly became incensed that the Cardinals would not lay down, and decided to pile on more runs, to beat them into submission completely. In the top of the 9th, Kingsport drew three consecutive walks to start the inning and load the bases, and then hammered away with the bats for a single and two doubles. Down by sixteen runs, Johnson City went down 1-2-3 to end the ballgame.

As a complete aside, the Johnson City Cardinals are a team out of time, I believe. They should all be in the English countryside somewhere playing rounders, not in a stadium in Tennessee playing baseball. I mean, look at these names: Kenneth Peoples-Walls. Rowan Wick. Brett Wiley. Kyle Grieshaber. Lance Jeffries. 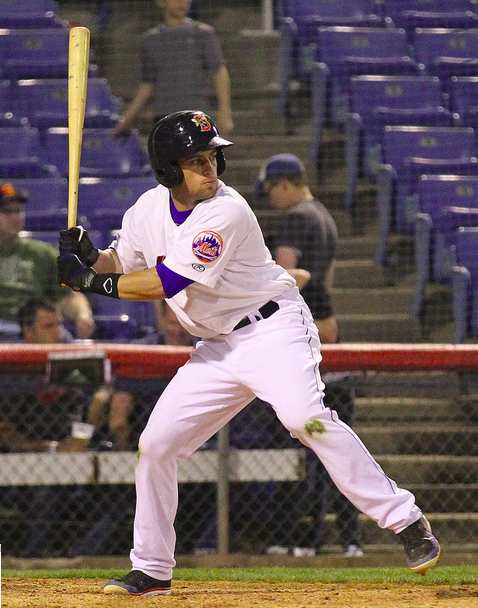 Despite a nice 2012 season, putting up good numbers in Savannah and St. Lucie, Logan Verrett has not done much to build on the success he had. The Baylor grad's performance last night is one of many disappointing pitching performances he's had this season. In his last ten starts, the right hander has a 4.66 ERA.