Mets vs. Brewers Recap: This is the ugly win that gets results!

Share All sharing options for: Mets vs. Brewers Recap: This is the ugly win that gets results!

This was not a pretty game. Even calling it presentable would be generous. But if you enjoy games that the Mets eventually win and also make Keith Hernandez sigh in frustration for nine innings, then this was the game for you.

The Mets got off to a fast start, thanks to some wildness from Milwaukee starter Johnny Hellweg and some faulty fielding behind him. Eric Young reached on a leadoff single and David Wright snuck one past first base to put runners on the corners with one out. A walk to the recently returned Ike Davis (see? he did learn something in Vegas!) loaded the bases, and another free pass to Kirk Nieuwenhuis forced in the game's first run. Then Juan Lagares hit a ball up the middle that might have gone for a double play, if Jean Segura's throw hadn't forced the first baseman to leap to catch it. That throwing error turned a potential inning-ending GIDP into a run-scoring ROE and put the Mets up 2-0. 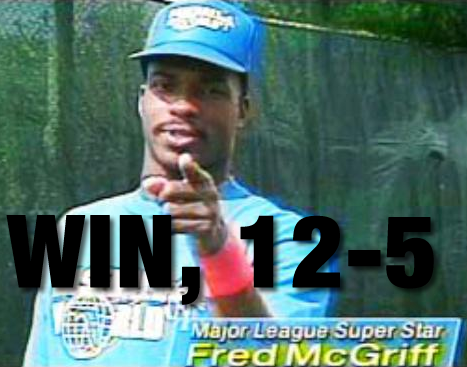 The Brewers came storming right out of the gate against Zack Wheeler, who, like his counterpart, suffered from some ugly infield defense. As Wheeler threw fastballs early and often, Norichika Aoki led off the bottom of the first with a single to left, then Segura reached when Daniel Murphy bobbled a slow bouncer. Ex-Met of renown Carlos Gomez zipped a hit down the first base line that allowed Aoki to easily score from second. So easily, in fact, that Segura thought I can do that too! and followed closely on Aoki's heels. He was thrown out by a mile, but that out was recorded, Gomez raced all the way to third, which allowed him to score shortly thereafter on a sac fly from Aramis Ramirez. Both Brewer runs were deemed unearned thanks to Murph's error, for those of you scoring at home. Not sure why you're scoring at home, especially now that the game is long over. Really, there must be better uses of your time.

[INDULGENT DAVID FOSTER WALLACE-IAN SIDEBAR: Seeing Carlos Gomez again reminded me of a Subway Series game at Yankee Stadium back in the carefree days of early 2007. Gomez drove Roger Clemens nuts by bunting his way on more than once. He also robbed a home run at the left field fence, while Clemens griped that one of the Yankee fans in the front row should've Jeffrey Maier'ed it. The Mets won the game 2-0 behind the flawless arm of...Oliver Perez. I swear this happened, and the Times has my back.]

The Brewers' storming in the bottom of the first would be undone by the Brewers' stumbling in the top of the second. Omar Quintanilla worked a leadoff walk and, after a sac bunt from Wheeler, Young reached on another Segura error. Then, Hellweg complicated things by fielding a comebacker that could have gone for a double play and throwing it to third for some reason, too late to nail Quintanilla before he dove back to the bag. That set up bases loaded and one out for Wright, but the captain lined out sharply to first, putting any hope of a rally in the shaky hands of Davis. Ike fell behind but hit a dribbler to the left side that kept dribbling further and further away from Segura, until he was forced to put it in his pocket as a run scored. Then, Nieuwenhuis snuck a single past a diving Rickie Weeks, scoring two more to put the Mets up 5-2.

Gifted with a brand new lead, Wheeler continually danced with giving it up, only to avoid disaster each time. It didn't hurt that the Brewers didn't feel like accepting any gifts. Wheeler issued a walk to Juan Francisco to start the bottom of the second, but retired the next three batters with little trouble. He found more trouble in the third when Aoki belted a leadoff double and Gomez legged out a one-out infield single, but the TOOTBLAN-happy Brewers once again ran themselves out of a rally. Gomez swiped second, and as Buck attempted to throw Gomez out, Aoki took this as his chance to steal home. Murphy fired a throw back to the plate in plenty of time to nail Aoki, who appeared to want no part of slamming into the sturdy catcher. After walking Aramis Ramirez, Wheeler induced a popup from Jonathan Lucroy to wriggle off the hook.

The Mets went quietly in the third, save for Wheeler singling for his first hit in the majors, but they scored again in the fourth when Wright received a one-out free pass, Davis singled, and Nieuwenhuis singled up the middle to drive in Wright. This the Mets did more or less on their own, but the Brewers' faulty gloves couldn't help pitching in. With two out, John Buck hit a fly ball down the right field line that Aoki misplayed. Given a reprieve, Buck slapped a ball to third that Ramirez couldn't handle, allowing yet another run to score and extending the Mets' lead to 7-2. Hellweg then walked Quintanilla, ending both his outing and any chance I could shoehorn "Hellweg and the Angry Inch" into my recap headline. Reliever Tyler Thornburg ended the carnage by fanning Wheeler.

Wheeler now had a five-run lead and was six outs away from qualifying for a win, but he staggered his way to the finish line. Juan Francisco shaved the Mets' lead a bit by starting the bottom of the fourth with a 439-foot bomb to straightaway center. Wheeler dispatched the next three Brewers, and in the fifth, he retired the leadoff hitter for the first time. Then he ceded back-to-back singles to Segura and Gomez and walked Ramirez to load the bases. Somehow, a gassed Wheeler managed to get Lucroy to pop out just beyond the infield and strike out Francisco looking, ending his evening on a high note.

In the top of the sixth, Nieuwenhuis walked with one out, stole second, and moved to third as Juan Lagares took a wild pitch for ball four. Lagares caught the TOOTBLAN-itis rife in the Miller Park atmosphere and was nailed trying to steal second base, but Buck made the error moot by singling in Kirk for the eighth Mets run. Despite two walks in the seventh, they were held off the board in that frame, thanks largely to a great leaping catch at the center field fence by Gomez to rob a homer from pinch hitter Marlon Byrd.

David Aardsma worked a scoreless bottom of the sixth, thanks in part to a bad call on a close play at first. Fresh from the minors, Greg Burke worked the seventh and saw Aoki shot a leadoff single past a diving Ike. One out later, Gomez blasted an RBI double over Nieuwenhuis's head in center. It was Gomez's fourth hit in as many at bats. Unfortunately for the home team, Gomez thought he could stretch his hit into a triple and was TOOTBLANed away as he slid into third. Burke retired Ramirez to halt the scoring there.

Thornburg, still doing yeoman's work in the top of the eighth, ceded a double to Nieuwenhuis to start the inning, followed by an run scoring single from Juan Lagares. The inning was otherwise notable for the first major league at bat for Burke, who would be asked to go two innings due to a Mets bullpen exhausted by Thursday's 15 inning fiasco.

Burke rewarded this faith in the bottom of the eighth by allowing a one-out single to Francisco and a hit by Logan Schafer that Nieuwenhuis dove for, for some reason. His when he couldn't catch the ball or locate it after his dive, the runners moved up to second and third. Pinch hitter Sean Halton hit a sharp ground to third that Wright snared, but his throw to first was offline, allowing Francisco to score. Burke was removed in favor of Josh Edgin, who induced a flyout from Aoki to bring a potentially dangerous inning to a close.

The Mets got that run back and then some in the top of the ninth as Eric Young led things off with a double against new Brewers pitcher Burke Badenhop, then came around to score on a two-out Ike Davis single. Nieuwenhuis capped an outstanding evening with a triple beyond Gomez's reach, driving in his fourth run of the game, and Lagares singled up the middle to drive in another.

Edgin stuck finished off Milwaukee in the bottom half to bring this contest to a merciful conclusion. Despite the ugliness of it all, it was nice to see Wheeler bend but not break, Nieuwenhuis have a big night, and Ike look competent in his first game back from the minors. Hopefully, Keith Hernandez will be able to unclench his jaw and fists before the next SNY broadcast. 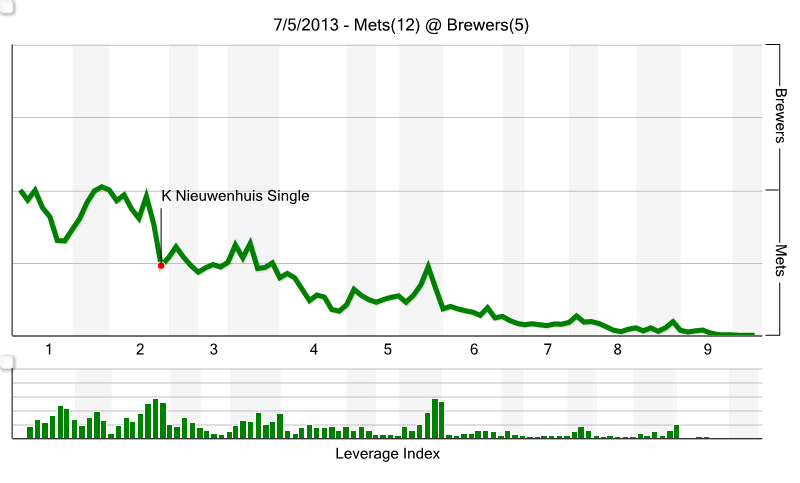