The right-hander put up yet another dreadful start.

Shaun Marcum has generated a lot of discussion in recent weeks. Some of it has been about his performance: is he legitimately terrible or very unlucky? Some people have discussed his health, as he has decided to pitch through numbness in his hand, and some people have discussed the fact that Marcum has been rather tight-lipped about his health, following a trend from his days as a Milwaukee Brewer. There was even some mild controversy before the game as he specifically asked for John Buck to start over Anthony Recker at catcher. Of course, if Marcum continues to pitch like he did tonight, there won't be much to discuss because he'll be off the roster. 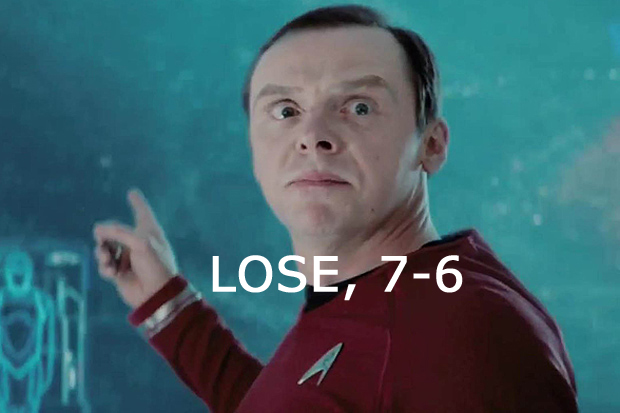 Marcum made his return to Milwaukee tonight and it did not go well, as he was blasted for six runs and 11 hits in an eventual 7-6 loss. The right hander struck out three, walked one, allowed a solo homerun, and saw his ERA rise to 5.29. It was the third straight start where he struck out three or less. His FIP stands at a solid 3.66, but at this point, it can't be considered very meaningful.

The first inning was nondescript for the Mets as they went down 1-2-3 against Brewers starter Yovani Gallardo. In the bottom of the first, Marcum allowed a leadoff infield hit to Norichika Aoki. After retiring the next two batters, he walked Aramis Ramirez and then allowed an RBI single to Jonathan Lucroy, making it 1-0 Brewers.

In the second inning, the Mets sandwiched walks by Ike Davis and Buck in between strikeouts by Marlon Byrd and Kirk Nieuwenhuis but they failed to score after Omar Quintanilla grounded out. Marcum started the second nicely with a strikeout of Rickie Weeks but then gave up three straight hits to Logan Schafer, Gallardo, and Aoki, making it 2-0 Milwaukee. Jean Segura added a sac fly to make it 3-0.

The Mets got their first hit via a Daniel Murphy single in the third but yet again, failed to score. The Brewers got another run off Marcum in the bottom of the frame as Lucroy launched a shot into the second deck in left. It was only the seventh homerun Marcum has given up in 78.1 innings. Gallardo retired the Mets 1-2-3 in the fourth and Marcum once again fell into trouble in the bottom of the inning (notice a trend?). Gallardo led off the inning with a booming double over Byrd's head in right field. After Aoki grounded out, Segura singled to right to make it 5-0.

In the fifth, the Mets finally realized they were facing the new, mediocre Gallardo and not the old one. Buck led off with a homerun that glanced off the right side of the right field foul pole. Quintanilla followed with a single, and later in the inning, Murphy drove him in with a double down the right field line, making it 5-2. Marcum threw his only scoreless inning of the game in the bottom of the fifth, helped out by Rickie Weeks being thrown out a second on a questionable call.

Thanks to some aggressive if not dumb base-running in the sixth, the Mets drew closer. Davis drew a walk to lead off the inning, and after Byrd struck out, Nieuwenhuis singled to left. Davis decided to try going from first to third and actually made it just barely ahead of the tag, and Nieuwenhuis moved up to second. Buck would make his third non-out of the game, hitting a single up the middle to cut it to 5-4.

Like so many other times this season, bad defense would cost the Mets. In the bottom of the sixth, Schafer led off a single. Gallardo then pushed a sacrifice bunt to the right side, which Marcum picked up and threw to Murphy who was covering at first. For whatever reason, Murphy could not handle the throw and it rolled past him into the outfield, and by the time he picked it up, Schafer had scored all the way from first, pushing the deficit back to two.

Now facing the Brewers bullpen, the Mets put together a rally in the seventh. Murphy and Wright singled with one out, and Davis followed with his third walk of the game. On an 0-1 count, Byrd flew out to Carlos Gomez, giving him a sac fly and pushing the Mets within one. Nieuwenhuis had a chance to give the Mets the lead but his line drive to left was caught by Schafer, ending the frame. The Mets bullpen made their first appearance of the game, and predictably, they gave up runs. LaTroy Hawkins retired the first two batters but after Weeks walked and stole second, Schafer ripped one into the right center gap, scoring Weeks and making it 7-5.

In the eighth, the Mets once again found themselves tantalizingly close to tying the game. Quintanilla singled off of Jim Henderson with one out, and after Valdespin popped out on a 2-0 pitch, Eric Young walked. Ron Roenicke then brought in lefty Mike Gonzalez to face Murphy and despite his splits against lefties, Terry Collins opted to keep him in there. The move would end up backfiring as after a double steal, Murphy popped up on a 3-2 count to Schafer. Greg Burke would hold Milwaukee scoreless in the bottom of the eighth.

Facing their old closer Francisco "K-Rod" Rodriguez in the ninth, Wright and Davis struck out to begin the inning. With two outs, Byrd homered to deep right-center, making it a 7-6 game. It was the third time this season Byrd had hit a solo homerun in the ninth inning off a closer that didn't tie the game. Byrd's heroics weren't enough to save the Mets as Rodriguez got Nieuwenhuis to swing at a changeup in the dirt to end it.

The Mets conclude their three-game series with Milwaukee tomorrow afternoon. Jeremy Hefner and Tom Gorzelanny square off in the rubber game at 2:10 pm EDT. 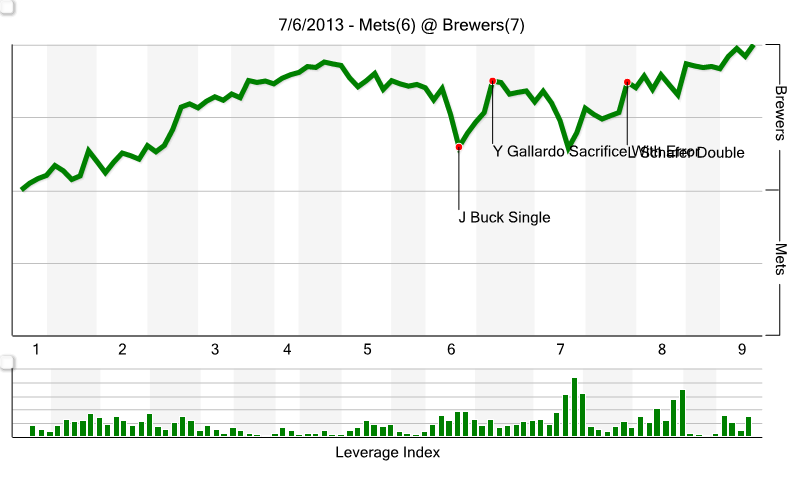