Zack Wheeler notched 12 strikeouts against the Padres on Thursday night, one of the best marks ever for a Mets rookie.

Zack Wheeler's start against the Padres last night was the best of his young major league career. The same was said about Wheeler's previous start in Arizona on Saturday, but Wheeler surpassed that start with an even better one. He notched 12 strikeouts, walked none, and gave up just one run in six innings.

Like Matt Harvey, Wheeler relies heavily on his fastball and goes to his slider most frequently among his offspeed pitches. The fastball generated a few swinging strikes—"whiffs" in the table above—but the slider was the most effective pitch in that regard. His curve, though thrown significantly less, was also very effective.

Here's what Wheeler's pitches looked like from the catcher's point of view. 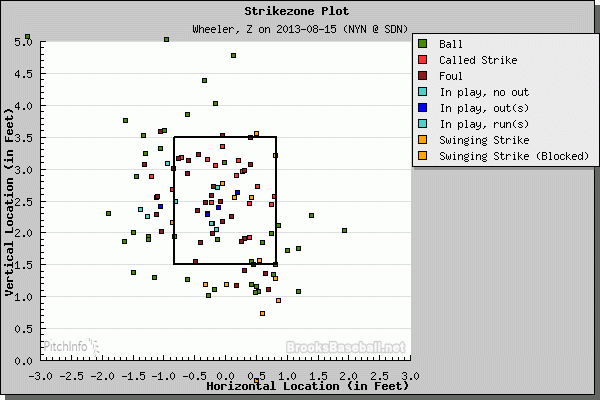 Wheeler's dozen strikeouts came in his twelfth game in the big leagues. Only three other Mets pitchers had ever struck out as many opposing hitters in the first twelve games of their careers: Dwight Gooden, Nolan Ryan, and Dick Selma.

Between his last two starts, Wheeler has 16 strikeouts, 2 walks, and has given up just 2 runs in 12.1 innings of work. The improvement in control is a welcome sight after he walked 4.97 hitters per nine innings in his first ten starts with the Mets.