Matt Harvey's start in Los Angeles a few days ago was one of his poorer outings of the season. He struck out the first two batters he faced but only finished with three strikeouts on the day and allowed four runs in six innings of work.

Harvey's pitch breakdown is pretty typical: lots of fastballs, plenty of sliders, and a handful of changeups and curveballs. Unfortunately, he generated just 6 swinging strikes on 95 pitches, a 6.3 percent rate that's far below his rate for the season. Even the best pitchers occasionally don't have it.

The swinging strikes—represented by yellow squares—are harder to find than usual, but Harvey kept the ball down more often than not, especially when he missed the strike zone. 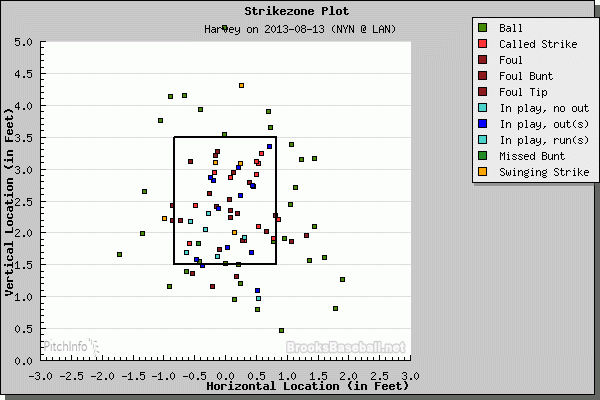 It's going to be tough for Harvey to catch up to Clayton Kershaw in ERA thanks to a recent string of dominant pitching by the lefty. With a 1.80 ERA, Kershaw has a fairly significant lead in the stat considering how late it is in the season. Fangraphs WAR still says Harvey's better—his 5.7 bests Kershaw's 5.3—thanks to a superior FIP. But it's hard to see Harvey taking the Cy Young without the best ERA in the National League.

As is the case with Kershaw in 2013, Harvey has a shot at catching Tom Seaver's 1973 ERA, though it won't be easy. Still, it's awfully impressive that Harvey's first full season is right up there among the best in Mets history.