In the dark ages between Seaver and Gooden, Craig Swan pitched 1200 league-average innings for the Mets and had two terrific years.

Share All sharing options for: Top 50 Mets of All Time: #32 Craig Swan

Here's a dimension of the pitcher win statistic that you likely never considered.

The late 1970s Mets were bad—very bad—but right-handed pitcher Craig Swan was good. Good enough to appear on ERA leader charts that were in those days printed in national newspapers. The only way to appear on these was to qualify with a certain minimal number of decisions. As Swan couldn't win many games, he preferred, if possible, to get his decisions by losing them. That way the far-flung Swan family could keep apprised of his career. 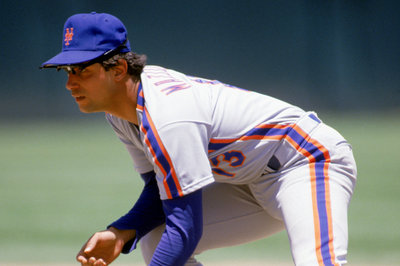 Lee Mazzilli might have been dreamed up by the Mets’ publicity department.

Craig Swan was born in Southern California in 1950. By age fourteen he was six-foot-two-inches tall, a little league champion, and the tosser of a first pitch at a World Series game at Dodger Stadium. After a record-breaking college career at Arizona State, he was picked by the Mets in the third round of the 1972 draft.

"The moment I put the pen to the contract," he remembered, "a lightning bolt struck a palm tree right out of my window and blew it to smithereens."

Another cosmic sign, of sorts, came from the lips of sweet-natured Mets Chairman M. Donald Grant, who singled Swan out after his big league debut the next year: "I remember him saying, 'Send the fat kid back down to Tidewater.'"

"I remember him saying, 'Send the fat kid back down to Tidewater.'".

"Swannie" would work off the baby fat over four seasons in the minor leagues, hobbled by a few injuries along the way. At one juncture he pitched six weeks with a broken arm before a doctor at an adjoining urinal diagnosed it properly. He pitched his first substantial stretch of big league games in 1976, at age 25, logging 132 innings at an about league-average 3.54 ERA. He sported a low-to-mid-90s fastball with natural movement and a hard slider.

"Those were my garden days," Swan remembers in Amazin', a collection of Mets oral histories. When I first read that, I was pretty sure he had misquoted Shakespeare's Cleopatra:

When I was green in judgment: cold in blood

But no, he meant spades and rakes and topsoil. "I used to go out to the bullpen during the games and tend my garden. I had all sorts of things, green beans growing up the wall, pumpkin and squash running down the runways, had all sort of vegetables. This is what I was doing during the games."

"I used to go out to the bullpen during the games and tend my garden."

After a mediocre sophomore effort, Swan in 1978 seemed to have fallen upon some magic beans. It began with a five-hit shutout against the Cubs at Shea Stadium. Then over 14 weeks he allowed two runs or less in 10 different starts. He was just 1-5 in the stretch, so it's unclear if the out-of-town relatives knew a thing about it.

In July and August he won seven consecutive starts and would finish with a 9-6 record, not bad for a team that won 66 games. By the end of the year he wasn't only appearing on leader boards, he was topping them. Swan's 2.43 ERA (and 143 ERA+) was best in the National League. In 207 innings he gave up just 164 hits and 58 walks, which amounted to barely a baserunner an inning. Never overpowering, Swan struck out a modest 125 batters, but his season was good enough for 5.6 wins above replacement (rWAR), fourth best in the league.

In 1979, Swannie's 14 wins were better than any two teammates combined. His strikeouts stayed level, at about five per nine innings, and his control improved to about two walks per nine. The hits fell in more frequently, raising his ERA to 3.29, but he was still a valuable pitcher in large part because of the whole mess of innings he threw. He accrued 4.6 rWAR over 251 innings, and the team won 63 games.

"We never scored," Swan said. In fact, he urged manager Joe Torre to hit him in the eight spot, but Joe wouldn't disrespect a position player like that. Even for a career .151 hitter like Swan.

Over the next few seasons the 210-pound pitcher (slimmed from a 240-pound peak) would spend substantial time on the disabled list, right when the club's new owners, Nelson Doubleday and Fred Wilpon, had rewarded him with the richest contract the team had ever paid a hurler (5 years, $3 million.) 1980 was off to a strong start when a late-June skid ended in missed time for a torn rotator cuff and eventual surgery, a surgery from which few ballplayers had at that time recovered.

In 1981 Swan appeared in just five games as he ran against the headwinds of his body's complaints and later a league-wide work stoppage. Incredibly, one injury resulted when he was nailed by his catcher's throw to second. The runner was safe, and Swan broke multiple ribs.

He rebounded the next year to throw 166 innings with an above-average ERA, but it was the last time his aching body could manage triple-digit innings in the major leagues. After splitting time starting and relieving in 1983, in 1984 he was granted free agency and, after a couple of appearances with the Angels, retired to go practice the therapeutic technique of rolfing.

Craig Swan, who had two excellent years and pitched over 1,200 innings for the Mets (96 ERA+) was maybe the best pitcher on the Mets after Seaver and before Gooden. He was better than the team deserved, but then, the Mets deserved more for the $5 million they gave him before his body broke.

It wasn't exactly a lightning bolt smashing anything to smithereens, but M. Donald Grant, as usual, was wrong. Let's just hope Swannie's family got the news.