Harvey struck out six and walked none in San Diego.

Matt Harvey bounced back from a poor start with a pretty good one on Sunday afternoon in San Diego. He threw six innings,struck out six, walked none, and allowed two runs. He used just 86 pitches, 55 of which were strikes, before he was lifted for pinch hitter Andrew Brown. In total, that's a pedestrian start by Harvey's standards, but it's still a reasonably good showing for a major league starting pitcher.

As far as pitch selection goes, this was on add outing for Harvey, who has almost always thrown his slider more often than his curveball and changeup. The change was really working for him in San Diego, as it generated swinging strikes just shy of 47 percent of the time he threw it. His overall swinging strike rate was 16.3 percent, which is outstanding.

Here's a plot of Harvey's pitches from the game. They were a bit more scattered than usual, as many of his misses were well outside of the strike zone. A couple of those pitches—the ones below the zone—got swings-and-misses, though. 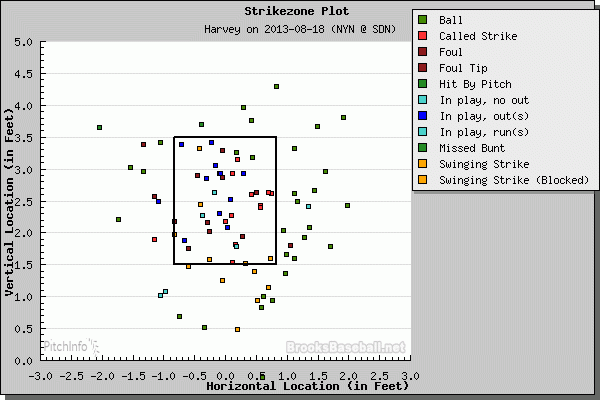 Several stats indicate Harvey has been the best pitcher in the National League this year, but Claytown Kershaw still has a superior 1.80 ERA. That will most likely matter to the voters who determine the winner of the Cy Young. If Harvey can close the gap, though, and is not shut down before the end of the season, he still has a chance.

He may not be able to match Gooden or Seaver, but Harvey's strikeouts and walks per nine are the best of any of the four seasons below. And given the way pitchers are used now compared to the eras in which those two pitchers pitched, Harvey will always be at a slight disadvantage when it comes to average game score, a stat that rewards pitchers who go deep into games.