Marlon Byrd was the latest in the Mets' recent line of surprisingly successful free agent signings.

The Mets have made plenty of poor free agent signings over the years. Several of their big free agent deals have failed miserably, but over the last several years, the Mets have gotten lucky by signing unheralded, old, or nearly-forgotten players to cheap deals. Let's take a look at a few of them.

Byrd’s story is well known since it’s the most recent, but the 35-year-old looked like he was pretty much out of baseball last year as he struggled mightily and received a 50-game suspension for a violation of MLB’s Join Drug Agreement. He was slightly below average in 2011, too, with a 95 wRC+.

This year, however, Byrd has been one of the best-hitting outfielders in baseball while making $700,000. His .285/.330/.518 slash line and correpsonding .363 wOBA and 135 wRC+ are all very good, and he set a new career high with 21 home runs in his time with the Mets. There’s still a month left in the season. And he, along with John Buck, netted the Mets Dilson Herrera, an actual prospect from the Pirates’ system.

Signed by the Mets before the 2011 season, Hairston was coming off a 2010 season that saw him post an 81 wRC+. That wasn’t very good for a corner outfielder. On a one-year, $1.1 million deal, he excelled but only in extremely limited—145 plate appearances in total, to be exact—playing time.

Perhaps the big surprise with Hairston was the 2012 season he had when the Mets re-signed him on another one-year, $1.1. million contract. It’s not like his tiny sample of data from 2011 had proven him as an above-average bat, but he destroyed left-handed pitching and totaled a slash line of .263/.299/.504 with a .342 wOBA and 118 wRC+. The Mets didn’t trade Hairston, but they got more out of him than most folks likely expected. 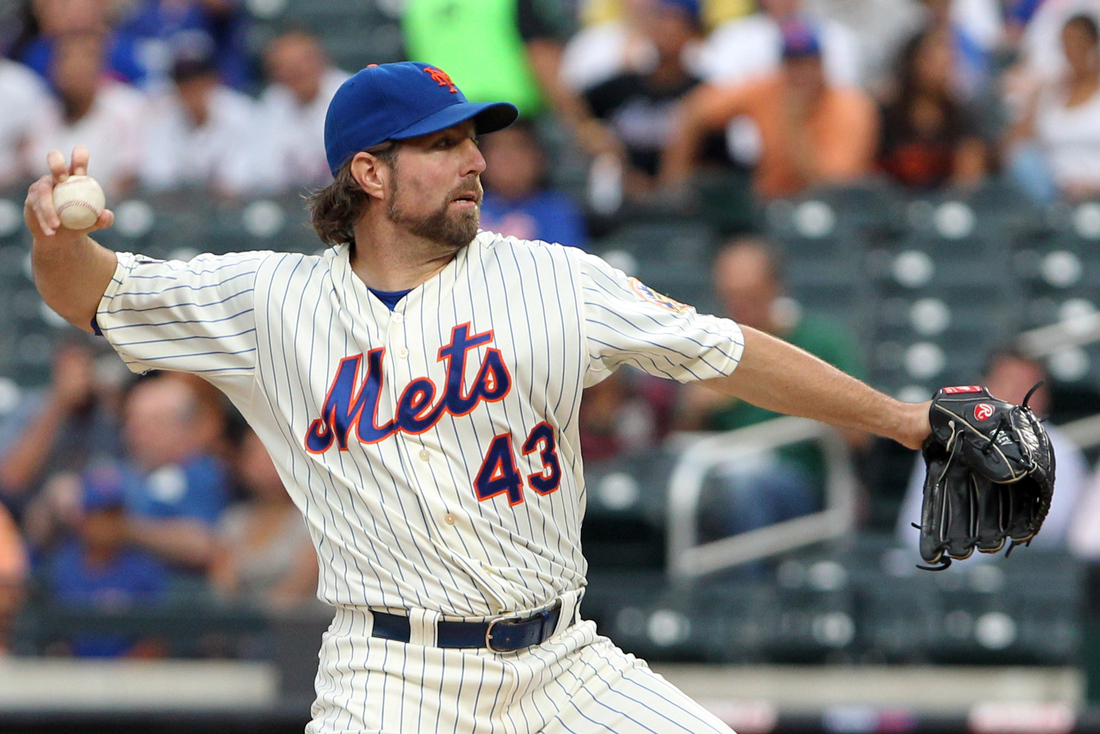 Like Byrd, Dickey’s story is well known, but the Mets signed him to a minor league deal before the 2010 season. He started the year in Buffalo, cracked the Mets’ roster shortly thereafter, and had two very good seasons before wining the National League Cy Young in 2012.

In the two years before the Mets signed Dickey, he had a 4.99 ERA and 86 ERA+ between 2008 and 2009 with the Mariners and Twins. He was often overlooked in the 2010 and 2011 seasons despite excellent numbers. His 2.84 ERA and 138 ERA+ were almost identical to his numbers last year, but with a much lower strikeout total, Dickey wasn’t even in the Cy Young conversation.

On top of all the production Dickey gave the Mets, he wound up netting them Travis d’Arnaud, Noah Syndergaard, John Buck, and Wuilmer Becerra. With Buck gone in the Byrd trade, the Dickey deal looks even better now than it did at the time it was made.

2009 was a dark year for the Mets, but the Gary Sheffield signing actually worked out rather well for the Mets. Sheffield was released by the Tigers at the end of spring training that year after posting a 92 wRC+ in 2008, and at the age of 40, it seemed like his career might be over.

But Sheffield hit 10 home runs in 312 plate appearances and made for one of the Mets’ more awkward moments when he hit his 500th career home run with the team. He retired at the end of the season.

As a member of the Cardinals, Tatis famously hit two grand slams in one inning in 1999, but after nine years in the big leagues, he was out of major league and affiliated baseball after the 2003 season. He made a cameo with the 2006 Orioles, but he played for New Orleans, the Mets’ Triple-A affiliate at the time, in 2007.

He was granted free agency following that season, but the Mets re-signed him that winter, and he went on to have an excellent 2008 season in a part-time role. In total, he hit .297/.369/.484 with a .370 wOBA and 126 wRC+. He was particularly dominant against right-handed pitching that year, too, with a 133 wRC+ against same-handed pitchers. He stuck with the Mets for two years after that, but his 2008 season stood out as one of the best of his career.

There were a handful of good seasons in Easley’s career, but he was a below average hitter over the eight years before the Mets signed him for the 2007 season. In just 218 plate appearances with them that year, however, he hit .280/.358/.466 with a .360 wOBA and 116 wRC+. That’s not quite as impressive as some of the other seasons mentioned here, but it was very good for a guy who played second base. Like Tatis, Easley stuck around for another year and wasn’t very good, but his 2007 season was a pretty big surprise.

By the time the Mets signed Henderson for the 1999 season, he was already a first-ballot Hall of Fame player, back when players were voted into the Hall of Fame on the first ballot. But in 1997 and 1998—his age-38 and 39 seasons—Henderson started to look more like a league average hitter than an elite one.

He certainly didn’t come out of nowhere, but Henderson’s production in 1999 was once again fantastic. He posted a .396 wOBA and 135 wRC+ and stole 37 bases in 51 attempts. He played for four more years after that, and while he was never terrible, he did indeed see his production drop to its 1997-98 levels. His last great season came with the Mets.

Oliver had a long career before the Mets signed him for the 2006 season, He debuted in the big leagues with the Rangers in 1993, started Game 3 against the Yankees in the 1996 ALDS, and lasted as mostly a starting pitcher through the 2004 season. But his numbers were never great and were often bad.

He spent the 2005 season bouncing around Triple-A teams, but the Mets picked him up before their great 2006 season and used him exclusively out of the bullpen. As a long reliever, Oliver had an incredible year, posting a 3.44 ERA and 127 ERA+. He threw 81 innings over 45 appearances and was an important role player on a team that ran away with the division.

The Mets had a habit of holding on to players like Oliver for too long, but letting him go after 2006 looks like a big mistake in hindsight. He’s still pitching today and has made just one spot start since the Mets converted him to a full-time relief pitcher. In total, he has a 2.89 ERA and 153 ERA+ over the seven seasons since he left the Mets. At the age of 42, he’s having a tough year in Toronto alongside former Mets Jose Reyes and R.A. Dickey. Like Dickey, his home run rate is significantly higher this year than it was in the recent past. If he decides to keep playing at the age of 43 next year, he'll probably still find a job somewhere in the big leagues.