Matt Harvey may miss the entire 2014 season. If he does, the Mets could turn to the free agent market to shore up their starting rotation.

Share All sharing options for: The Mets' starting pitching options in the free agent market this winter

Whether or not Matt Harvey will really be ready at the beginning of the 2014 season—which he tweeted but sounds incredibly optimistic—the Mets will likely approach the offseason as if Harvey will miss the entire year.

Without Harvey and Jeremy Hefner, who will soon have Tommy John surgery, the Mets probably have four starting pitchers penciled into their starting rotation for Opening Day: Zack Wheeler, Jon Niese, Dillon Gee, and Jenrry Mejia. Assuming all four pitchers are good to go when the season begins and the Mets continue to use Mejia as a starter, that leaves one vacant spot in the team’s rotation. Perhaps they’ll fill it with a prospect like Rafael Montero, Noah Syndergaard, or Jacob deGrom, but there’s a chance the team will go out and sign a free agent starting pitcher to at the very least keep a spot in the rotation warm while those pitchers further develop.

There’s no replacing Matt Harvey, who was not only one of the best pitchers in baseball this year but led the Mets in innings pitched. Let’s take a look at some of the free agent starters who might make sense for the team on short-term deals, assuming they spend money in free agency this winter.

Arroyo definitely isn’t the most exciting name on the list, but he’ll turn 37 in six months and might be willing to accept a one-year deal. He doesn’t strike out many hitters or induce a ton of ground balls, but Arroyo rarely issues walks and generally limits the damage. He had a 3.74 ERA last year and has a 3.42 ERA this year, both of which are pretty good considering he pitches half of his games in the hitter-friendly Great American Ball Park. And he’s been one of the most consistently durable starting pitchers in baseball for the past decade.

Like Arroyo, Burnett will soon turn 37. Unlike Arroyo, he’s a strikeout pitcher, and he’s been very good with the Pirates ever since the Yankees traded him there before the 2012 season. He might be able to command more than the Mets are willing to commit in terms of years or dollars, but he’d be more than just a placeholder if they brought him back to New York.

It looked like Colon’s big league career was ending after the 2009 season, but he bounced back with a good year for the Yankees in 2011, and he’s been a bit better over the last two years with the A’s. He served a suspensions for PEDs late last year, but he’s been just as good this year as last. Colon doesn’t strike out many opponents, but he limits walks and isn’t particularly prone to allowing home runs. He’s also 40 years old and, as a result, might not command much of a raise from the modest salaries he’s earned in Oakland the past two years.

Feldman hasn’t been particularly great or durable in his career with the Rangers, Cubs, and Orioles, but he’s been a serviceable major league starter between 2012 and 2013 despite pitching in a trio of hitter-friendly parks. He’ll be 31 next year and might not accept a one-year deal, but moving to the more neutral confines of Citi Field might appeal to him if the Mets are interested. 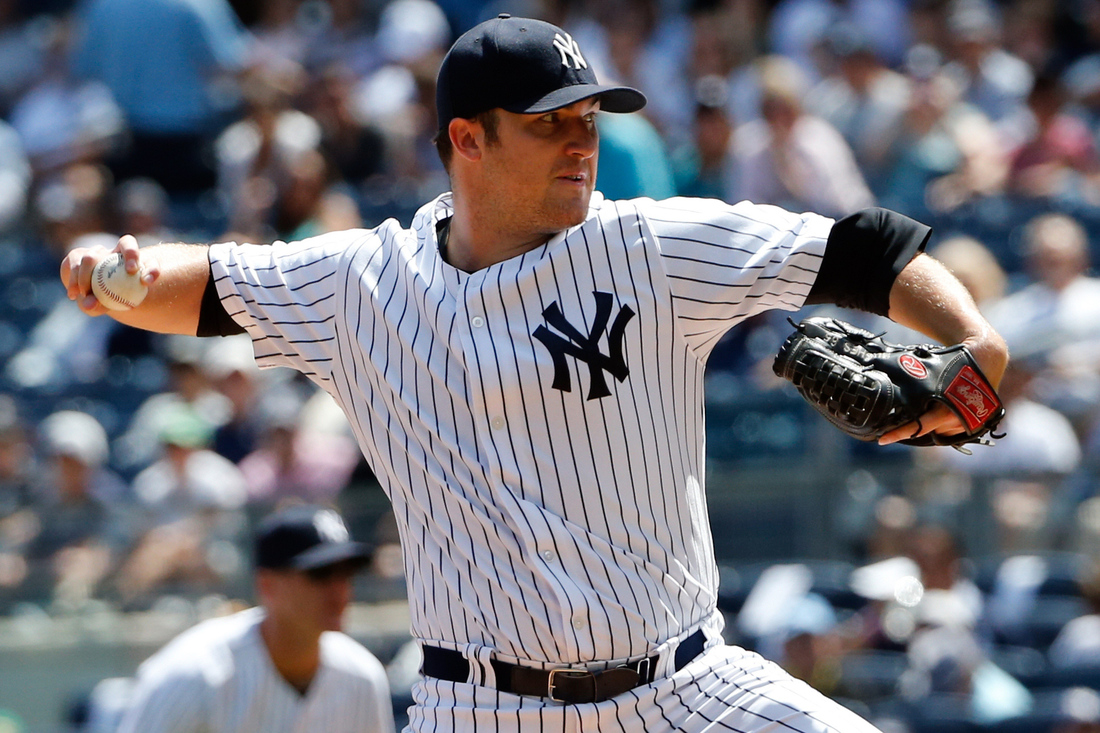 The Yankees have probably lost their patience for Hughes, who recently suggested he’d even be open to a bullpen role when he hits free agency this winter. But Hughes’s major problem has been his home run rate, which has been a big problem in the Bronx but hasn’t been too bad everywhere else. He has rates of 7.3 strikeouts and 2.7 walks per nine over the last four seasons, and his too-high 1.4 home runs per nine would very likely improve with a move to Citi Field. Given how ineffective Hughes has been this year, he might look for a one-year deal to set himself up for something better after the 2014 season.

Johnson has always had trouble staying healthy, but he never pitched as poorly as he has this year with Toronto. He’s currently on the disabled list and has a 6.20 ERA and 4.61 FIP on the season. His home run hate is an absurd 1.66 per nine innings, a full home run above his career rate. Johnson certainly isn’t the first pitcher to struggle after a move to Toronto, and like several of the aforementioned pitchers, a change of scenery really might be good for him. It’s hard to imagine he’ll get anything but an incentive-laden deal, but he’s probably worth a roll of the dice at the age of 30.

Last year, the Mets’ former top pitching prospect wasn’t even playing affiliated ball anymore. But he’s been good, if unspectacular, in his return to the big leagues after signing with the Cleveland Indians and making the team. He hasn’t been the top-of-the-rotation starter that he was several years ago with the Rays, but his fastball velocity is back, and he’s holding his own with a 4.25 ERA and 3.99 FIP this year.

Imagining Lincecum wearing a non-Giants uniform is strange, but his past couple of seasons have been a rollercoaster. He’s still capable of brilliance in any given start, but when things go bad, they really go bad. He doesn’t turn 30 until next year, though, and he was one of the best pitchers in baseball as recently as 2011. He might never regain that form, but he’ll undoubtedly get every opportunity to try. If he’s really reduced to looking for a one-year deal, it would at least be entertaining to see him pitch in orange and blue.