Even in a relatively bad start, it's pretty clear that Matt Harvey is, indeed, better.

Matt Harvey's twenty-second start of the year in Miami on Thursday afternoon wasn't his best, though he carried a shutout through five innings, struck out eight, walked none, and allowed three runs in 5.2 innings in total. He threw 110 pitches, one of his less efficient outings of the year, and notched a game score of 55. He's only had three starts this year with a lower game score than that, one of which also came against the Marlins.

With a handful of exceptions, Harvey was a two-pitch pitcher in this start. He relied heavily on the fastball, as he usually does, but he threw his slider far more frequently than his curveball or changeup. There have been starts this year in which all four of Harvey's pitches worked very well, but that wasn't the case here. A below-average day for Harvey is, of course, not that bad compared to other starting pitchers. The swinging strike rate on his slider—21.43 percent—was still ridiculously good.

The strike zone plot below shows where Harvey threw his pitches. In his best starts, the pitch locations on this chart have been more tightly grouped. In this start, his misses crossed the plate far outside of the zone. 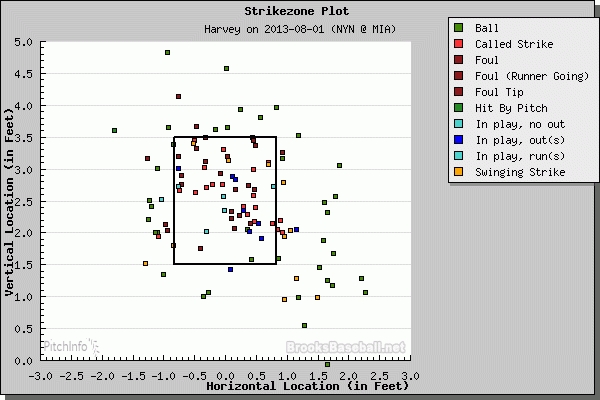 The story here is basically the same: Harvey trails Clayton Kershaw for the National League lead in ERA, but his 2.00 FIP is the best among starting pitchers in all of baseball. In the NL, his closest competitor in FIP is Adam Wainwright, whose 2.27 FIP trails Harvey by a significant margin. Over his last few starts, Harvey's walk rate has gotten better, and it was already good before the recent stretch. Matt Harvey is basically the best pitcher in baseball, but he'll probably need to catch Kershaw in ERA to win the Cy Young.

Each of the four Mets pitchers below fared well in his twenty-second start of the season. Since R.A. Dickey pitched in the most similar environment to Harvey, it's particularly impressive that Harvey has kept a better pace than the erstwhile Mets knuckleballer.