A three-run home run from Francisco Pena was all the 51s needed behind Chris Schwinden, who allowed one earned over six innings to lead Vegas to a 5-2 victory in Memphis. Wilmer Flores—who's set to make his major league debut—flip-flopped between the corners, starting at first base before finishing the game at third. I'm very eager to watch Flores play, especially defensively. It will be interesting to see where he spends most of his time in the field. I hope he gets a shot at second for at least a few games so we can see what his range looks like first hand.

Luis Cessa was dominant Monday night, striking out 12 and walking none over eight scoreless innings to lead Savannah to a 6-0 victory over Charleston. The outing was a nice exclamation point to Cessa's season as he is likely nearing an innings limit--he tossed just 72.1 innings last year and now sits at 112.1 after tonight's performance. He's lowered his ERA to 3.12 and brought his strikeout to walk to 109:17. There was good news offensively as well with Brandon Nimmo following up his controversial stat line from last night by launching his first home run since April 15th (in Grayson no less). He also added a double and a single and didn't strikeout, so that pretty much makes this Nimmo's best game of the season. If that wasn't enough for you, the double was off of a lefty, his second extra-base hit off of a lefty this season. Overall, a very pleasing night in Georgia. 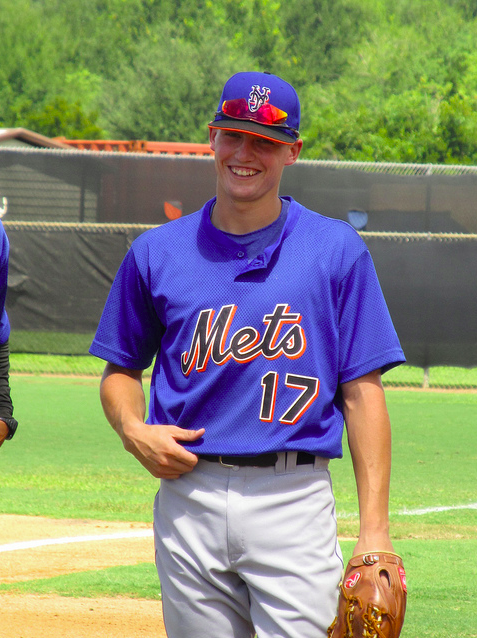 Nimmo was runner-up for Star of the Night (PHOTO CREDIT: Bryan Green)

It's too bad for Brandon Nimmo that Luis Cessa pitched the game of his life last night, otherwise he'd have been the star.

Jordany Valdespin, for his sneak attack suspension which was a pretty fitting end to his tumultuous season.