Matt Harvey's twenty-third start of the season, his first complete-game shutout, was one of the best starts of his spectacular young career.

Perhaps it's appropriate that Matt Harvey threw his first complete-game shutout in his thirty-third start of his major league career. The 24-year-old threw just 106 pitches in the effort against the Colorado Rockies in his twenty-third start of this season. He struck out six, walked none, and gave up just four hits. For his career, Harvey has thrown 219.0 innings with a 2.26 ERA, 2.34 FIP, 248 strikeouts, and 55 walks.

Although he struck out just six Rockies hitters, Harvey still missed bats at an incredible rate on Wednesday night. With 19 whiffs on his 106 pitches, Harvey had a 17.9 swinging strike rate on the evening. As usual, Harvey used his slider as his primary offspeed weapon. Both the slider and the curve were great, as he threw them for strikes and got a few whiffs from each. And his fastball was nothing to sneeze at, even though he was throwing it a little slower than usual. And yes, an average fastball of 96.14 miles per hour is a little on the slow side for Harvey.

The plot below shows that Harvey was getting swinging strikes all over the zone and outside of it. 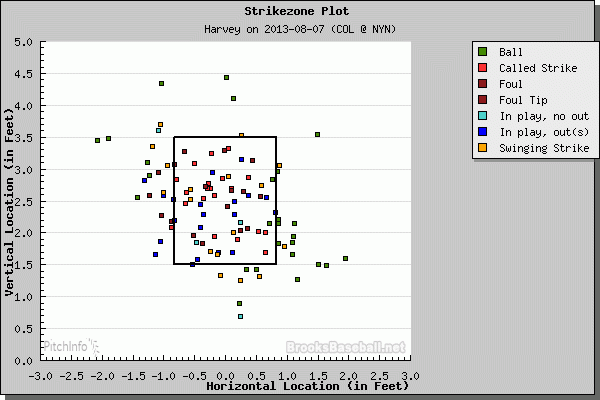 There are two concerns when it comes to Harvey's shot at the Cy Young this year: He's slightly trailing Clayton Kershaw in ERA, and he's eventually going to hit an innings limit. He's been so good that he still ranks atop the Fangraphs board in WAR, but Kershaw and Adam Wainwright could end up with a stronger case for the award if they pitch almost as well as Harvey over a span of more innings.

The twenty-third start was a great one for all of the Mets pitchers below, but Harvey's season is still awfully impressive. Gooden's 1985 was one of the top pitching seasons of all time—his 229 ERA+ that year ranks 11th since 1901—but that doesn't make what Harvey's doing right now any worse.