*All results from games played on Saturday, August 31st 2013

It was a wild, back-and-forth affair in Sin City, but what else would you expect in the PCL? In the end, newest 51, Cory Wade nailed down the save in the ninth and Vegas clinched the division title, making them the fourth Mets affiliate to punch their playoff ticket this year. This is the first Triple-A playoff appearance for a Mets affiliate since the New Orleans Zephyrs made it in 2007. And if I were a more vindictive person, I would point out the that Bisons are a mere two games over .500 and have already been eliminated from the International League playoff race.

Just two games left for the B-Mets before they head to Trenton later this week for their first playoff series in nearly a decade.

Another day, another rain out in the so-called sunshine state.

Savannah is just paying out the string before they kick off their playoff series against Augusta later this week, but it's always nice to sweep a doubleheader. In Game One, Luis Cessa continued his breakout 2013 season, going the full seven innings, and in Game Two, the Gnats offense came out in force early to support Jake Kuebler. The Gnats scored all six of their runs in the first two innings, keyed by 2-RBI hits from Stefan Sabol and Dilson Herrera.

Brooklyn's bats went quiet against Cal's kids, and the Cyclones now find themselves a half game back of Aberdeen. Akeel Morris was very good in his five innings of work, but the Brooklyn pen surrendered six runs and the bats never got going in Aberdeen. The Cyclones get a rematch this evening at MCU Park in what is pretty close to a must-win game for Brooklyn's finest.

Game 1 of the K-Mets's Appy League playoff series was rained out. They will try again today with Chris Flexen on the mound against the flame-throwing Jandel Gustave. 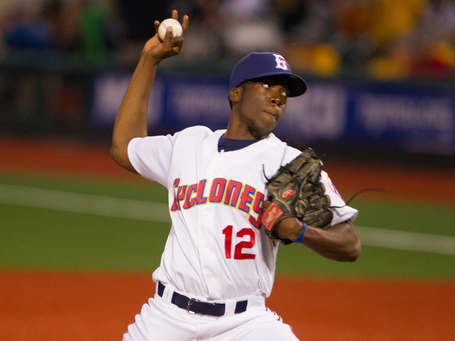 (photo by Gordon Donovan)
Akeel Morris has struck out 60 in 45 innings of work in the Penn League. He's also walked 23, but we probably shouldn't sweat the details, right?

Kevin McGown and Cameron Griffin gave up six runs in four innings of work and turned a tense Cyclones game into a laugher. Honorable mention to all that rain.