Yankees to WFAN is official, Mets currently without radio broadcaster for 2014

The Yankees will move their radio broadcasts to 660 WFAN beginning in 2013, displacing the Mets from their 27-year radio home.

Share All sharing options for: Yankees to WFAN is official, Mets currently without radio broadcaster for 2014

Confirming rumors from yesterday, the Yankees announced that they have signed a multi-year deal with CBS to broadcast their games on WFAN radio 660 beginning in 2014.

The move leaves the Mets without a radio broadcaster for 2014, though they'll undoubtedly strike a deal with another outlet—ESPN and Clear Channel are the most likely landing spots—after having paired with WFAN since the station's inception in 1987.

For local listeners the Mets' move to a new broadcast partner has little consequence apart from nostalgia. For Mets fans in Pennsylvania, upstate New York, Massachusetts, Maryland, and other neighboring states, however, a rightward shift down the AM dial will probably mean they'll no longer be able to listen to Mets games on the radio. Here are the respective radio signal coverage maps for WFAN and, for example, 1050 WEPN (via radio-locator): 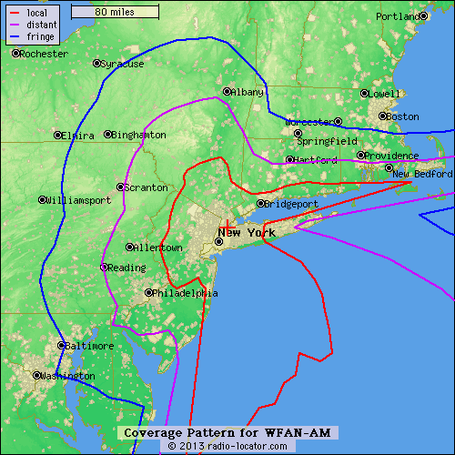 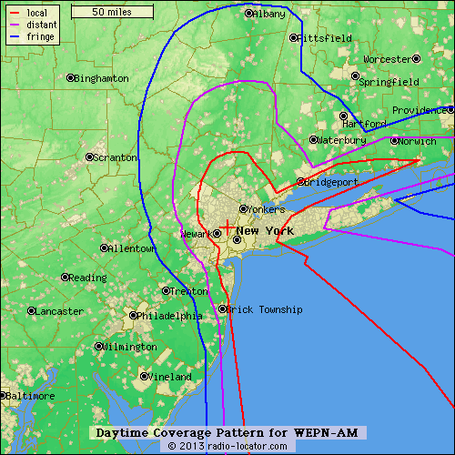 It would have been a bigger concern a decade ago, perhaps, but with MLB Gameday Audio running a modest $20 for an annual subscription, out-of-area Mets fans left in the lurch by the broadcast change will have an affordable alternative. Moreover, Sirius satellite radio carries all MLB radio broadcasts—plus lots of other stations dedicated to sports, music, comedy, talk, and so forth—so that's an option as well.