The rookie backstop has struggled so far at the plate, but the same cannot be said for his work behind it.

By most measures, one would probably deem Travis d'Arnaud's first cup of coffee in the big leagues something of a disappointment—yesterday's walk-off notwithstanding. After all, he is batting around .170. The walks are nice, but the plethora of strikeouts aren't. Also, he's not hitting for any semblance of power; he recently crossed into that precarious territory where on-base outshines slugging.

OK, so Travis d'Arnaud is not off to the best of starts pic.twitter.com/TngXqd7LpN

Again, by most measures, the prized prospect has left a lot to be desired. But not all measures. [cue GIF]

The pitch in the above GIF was called for a strike by home plate umpire Alan Porter. This is significant because take a look at where PITCHf/x located that Zack Wheeler offering (from the catcher's perspective): 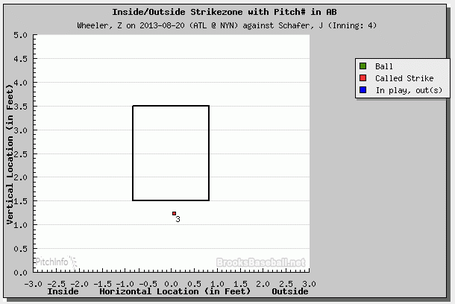 In short, Travis d'Arnaud stole that strike—or more specifically, he framed the pitch so well that he was able to fool the umpire into thinking it was a strike. Quite the valuable skill. And yes, if you're unfamiliar with recent work on pitch framing, it is indeed a repeatable and very valuable skill. From a May 15th piece entitled "The Art of Pitch Framing" by Ben Lindbergh for Grantland:

"Mike Fast, then an analyst for Baseball Prospectus (and now an analyst for the Houston Astros), attempted to determine what catcher receiving was worth. By studying where strikes are typically called and establishing which pitchers were getting more or fewer strikes than they "should" have, given where their pitches crossed the plate, Fast was able to isolate the effect of the catcher. He concluded that pitch framing can make a major impact, and it also is more consistent from year to year than even reliable offensive metrics like on-base percentage or slugging percentage. In other words, it's not insignificant, and it's not just noise. It's a valuable skill that persists from season to season.

Fast found that (Jose) Molina, the best receiver, was worth 35 runs above average per 120 games, and (Ryan) Doumit, the worst, was worth 26 runs below average."

The more one learns about pitch framing the more the intrinsic value in having a catcher that can do it effectively becomes apparent. And it seems the Mets (finally) have one. Not convinced? 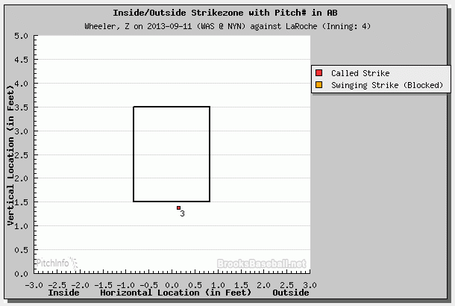 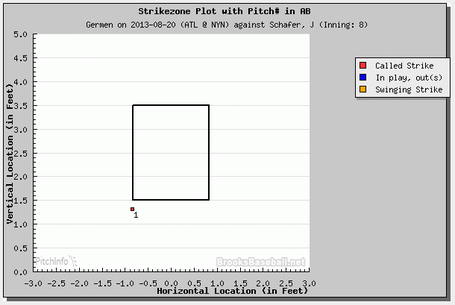 The above was no fluke; Travis d'Arnaud appears to be extremely good at the burgeoning art of pitch framing. Not only is this visible in the above examples as well as in some of the data we've seen thus far—limited, though it may be—but it agrees with much of the anecdotal evidence we've already been able to glean on the young catcher.

"The common thread, which multiple Mets pitchers referenced in talking about their new catcher, is d'Arnaud's ability to make low pitches look like strikes. It is a skill that d'Arnaud believes he learned as a teenager, watching then-Dodgers catcher Russell Martin on television, then perfected in 2011 alongside Double-A New Hampshire manager and former big league catcher Sal Fasano.

"When I was younger, I pretty much tried catching just like [Martin]," d'Arnaud said. "I liked the way he caught that low pitch, so I just tried to catch like him."

(Perhaps not so surprising, Martin is one of the catchers in today's game consistently ranked atop leaderboards in terms of runs saved via questionable pitches successfully framed for strikes.)

Despite their relatively brief time together d'Arnaud has already managed to make quite the impression on some of the Mets pitchers as well; from the same story:

"Wheeler and Gee both recalled being surprised in their most recent starts about how well d'Arnaud made their low pitches seem higher.

"When the balls are down, he does something that makes them look like they're strikes," Wheeler said, referencing his Tuesday start against the Braves. "It's ridiculous. I had a couple that I threw and I knew they were balls, but they looked like strikes after he framed them up."

Matt Harvey remembers being amazed during the All-Star Game at Cardinals catcher Yadier Molina's ability to frame pitches—something Harvey was able to notice in two short innings. d'Arnaud, he says, "has a lot of those qualities in him as well."

"It's hard not to notice when you throw a borderline pitch low in the zone and they can kind of bring it up a little bit," Harvey said. "It's a big confidence booster as a pitcher."

Glowing reactions from pitchers who may have only tossed to d'Arnaud a half dozen times or so. That's because, as they stated, he's generating value in a way that we're not used to seeing. If anything, Mets backstops have been losing value rooted in throwing strikes—and this swing can really add up over the course of an entire season.

As previously mentioned, in the most extreme example Jose Molina's outstanding pitch framing ability has been measured at upwards of 3.5 WAR per season for the Rays since 2008. And it works for non-Molina brothers, too; have you every wondered why the Yankees give Francisco Cervelli so much playing time? He's a very strong framer—same with Chris Stewart.

Conversely, those who aren't attuned or who are unable to pull off this high-precision technique can cost their teams value much the same way. Take a guy like Ryan Doumit, for example—he's always a seemingly attractive player in that he hits more like an outfielder, but he seems to be able to fake it at catcher. Well, there's a tradeoff to that offensive value; he's cost his teams nearly 30 runs a season in pitches that an analysis of strike zone trends would expect to be called for strikes, but were not.

And this is where the Mets have found themselves over the past few seasons. In short, the recent, pre-d'Arnaud fare has been less than impressive. John Buck was among the bottom five catchers in baseball in pitch framing earlier this season—Anthony Recker too, even garnering poor reports back in his minor league days. And to no one's surprise, nor was Josh Thole—the converted catcher—a master strike thief.

But now, things appear to have turned a corner. Aside from his impressive offensive resume, the young d'Arnaud possesses a different kind of skill that has already gotten the attention of his pitchers and coaches—the kind of skill that Mets fans haven't consistently seen since the days of their last great catcher.

*Hat tip to AA overlord Eric Simon for the GIFs