Angel Pagan exacted a bit of revenge upon his former team as the Giants beat the Mets.

Zack Wheeler walked Angel Pagan to begin the first of the Mets’ three games against the San Francisco Giants. It wasn’t all downhill from there by any means, but that plate appearance turned out to be a good bit of foreshadowing in the game. 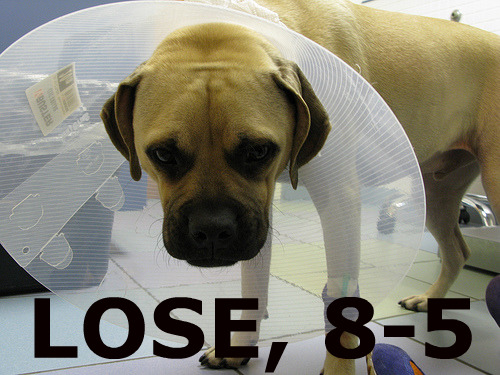 Wheeler didn’t allow the Giants to score in the first but went on to issue six walks and allow four runs in five innings of work. The second inning was particularly laborious for the 23-year-old. He walked Hunter Pence and Pablo Sandoval to start the inning. After recording a fly ball out, Wheeler walked Tony Abreu to load the bases and walked opposing pitcher—and former Mets farmhand—Yusmeiro Petit to force in the first run of the game.

Pagan singled to bring home San Francisco’s second run, and their third run scored on a fielder’s choice ground out off the bat of Gregor Blanco. Wheeler retired Brandon Belt on a very long fly ball to the deepest part of Citi Field to end the inning and keep the game within reach for the Mets’ offensively-challenged lineup.

That lineup scored next, as a Ruben Tejada double, a Wheeler sacrifice bunt, and a ground out by Eric Young scored Tejada in the bottom of the third to cut the Giants’ lead to two runs. And in the fourth, Petit pulled a Wheeler and walked the first two batters he faced: Daniel Murphy and Lucas Duda. A Wilmer Flores double scored Murphy, and Matt den Dekker singled to bring home Duda.

But den Dekker made a baserunning mistake, turning too hard around first base, and was hung up between first and second as the Giants cut off the throw from the outfield. Luckily for the Mets, den Dekker was able to stay in the rundown long enough for the lead-footed Flores to score from third and give the Mets a 4-3 lead.

The Giants, however, tied the game right back up in the fifth. Wheeler walked Pagan to begin the inning again, and after a sacrifice bunt and an infield single, Pagan scored on a ground out by Buster Posey. Wheeler finished the inning, but having thrown 107 pitches, his night was over.

Sean Henn took the mound in the sixth and threw a scoreless frame, but he came back out to start the seventh and served up a leadoff home run to Angel Pagan to give the Giants a 5-4 lead. It was all downhill from there.

Scott Atchison finished the seventh without allowing another run to score, but Gonzalez Germen started the eighth by giving up two runs on two hits and a walk. Tim Byrdak finished that frame, but Jeurys Familia started the ninth and gave up a run on two hits and two walks before he was bailed out by David Aardsma, who struck out the only two batters he faced.

In the bottom of the ninth, the Mets loaded the bases thanks to an error by Giants shortstop Brandon Crawford on a one-out ground ball that should have been a game-ending double play. Daniel Murphy then singled to make it just 8-5 in favor of the Giants, but Lucas Duda popped out and Andrew Brown flew out for the last two outs of the game.

To top off the loss, Travis d'Arnaud exited the game early after he was hit in the shoulder by a foul tip behind the plate. The injury didn't appear to be serious, as he stayed in the game for a short while afterwards, but it still wasn't a good thing to see. 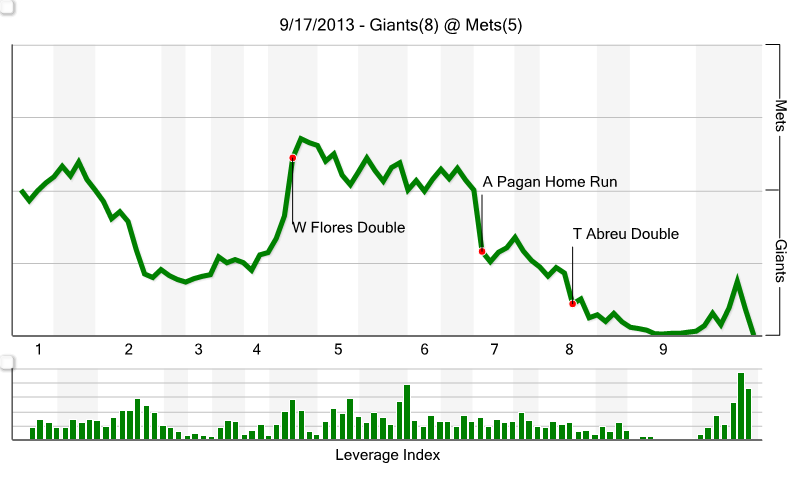