Mets vs. Giants Recap: Anything Niese can do, Bumgarner can do better

Madison Bumgarner was the southpaw master and Jonathan Niese was the apprentice in San Francisco's 2-1 win over New York.

Share All sharing options for: Mets vs. Giants Recap: Anything Niese can do, Bumgarner can do better

One of the funny things about baseball is that you never know when a run will be the winning run. Well, you know you can't have a winning when your team is still down. But when it's ahead? You never know. That's why I hate when managers play the infield back in a 0-0 game with a runner on third and less than two outs. Cut that run off! It could be the winning run!

At least the Mets were at double play depth when Ehire Adrianza hit a ground ball to shortstop with one out and runners at the corners in the fourth inning. Omar Quintanilla fielded the ball, flipped to Daniel Murphy at second and watched the play unfold. Murphy got the out and second, turned towards first, and fired a strike to Josh Satin. The ball hit Satin's glove just a split second after Adrianza's foot hit the first base bag. It was now 2-0 Giants instead of 1-0, and that made the difference in today's game.

San Francisco scored its first run earlier in the inning. Backup catcher Hector Sanchez roped a double to left with one out, and former Mets legend Joaquin Arias followed with a bloop single. That set the stage for Juan Perez, who grew up in the Bronx and was playing in a major league game in New York for the first time. Perez ripped a single to right-center field to drive home Sanchez and open up the scoring.

It was one of three hits on the day for Perez, who also added a walk for a perfect day at the plate. The Mets, on the other hand, were held to just four hits total by Giants starter Madison Bumgarner. Two of those hits came consecutively in the bottom of the fourth. In response to the Giants' miniature rally in the top of the frame, Josh Satin led off with a double and was driven home by a Murphy single. However, thanks to an Andrew Brown strikeout and some nifty glove work by Arias, New York wouldn't be able to equalize in the inning.

The Mets wouldn't have any more success on offense for the rest of the game, either. After Bumgarner struck out the side in the fifth, the Mets put two runners on with two outs in the sixth. Wilmer Flores had a chance to drive in the tying run, but his hard ground ball up the middle deflected right off of Bumgarner's leg and went straight to first baseman Buster Posey for an easy out.

New York threatened again in the seventh when a Zach Lutz walked moved Quintanilla into scoring position with two outs. Bumgarner was able to get the final out, though, when Eric Young Jr. grounded out to shortstop.

With Scott Atchison and LaTroy Hawkins holding the Giants down after Jon Niese left the game, the Mets still had a chance to win this game in the ninth. It certainly seemed like they might mount something, too, after Matthew den Dekker led off with a walk. However, Juan Lagares's attempt at bunting for a base hit turned into a mere sacrifice, and Bruce Bochy removed Santiago Casilla in favor of Javier Lopez to pitch to pinch hitter Lucas Duda. Duda hit a harmless fly ball to center field, and Anthony Recker followed with a strikeout to put this one to bed.

While there was not much to speak for on the offensive side of things for the Mets today, the future does look brighter every time Jon Niese hurls a quality start. That's what happened today as the southpaw struck out four batters and walked two in seven innings. It could have been an even better day for Niese if Quintanilla and Murphy had been just a little quicker in turning that double play in the fourth inning.

Next up for the Amazins are the Philadelphia Phillies. Daisuke Matsuzaka will start against Cole Hamels tomorrow night in South Philly. Only 10 games remain in the 2013 regular season. 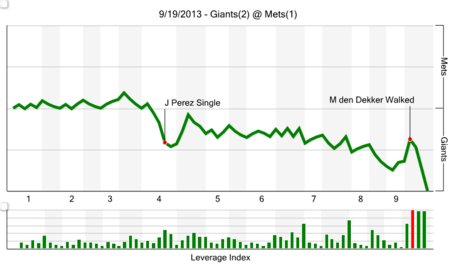