Share All sharing options for: The 2013 Mets mini calendar

Last offseason, a company called Turner Licensing released an officially licensed mini team calendar for the 2013 Mets. Yours truly received this totally-sanctioned-by-MLB mini calendar from his in-laws as a stocking-stuffer this past Christmas. Even at the time, less than three months after the curtain fell on the 2012 season, the calendar was woefully out-of-date. With four weeks remaining in the 2013 season, the calendar is downright ludicrous. 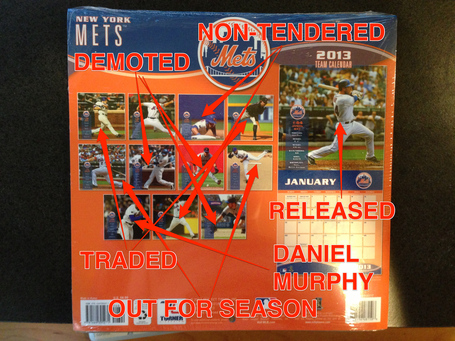