Mets vs. Phillies Recap: David Wright and friends make it rain in Philly

The Mets offense pounded Tyler Cloyd against the backdrop of rain.

Share All sharing options for: Mets vs. Phillies Recap: David Wright and friends make it rain in Philly

During a miserable season in which the Mets will have failed to reach .500 for the fifth straight year, it has been hard to find positives. Games like tonight provide a reminder of one: the Phillies are just as bad, if not worse.

Giving no regard to securing a protected draft pick, the Mets used homers from David Wright and Daniel Murphy to back Dillon Gee in a 5-4 rain-shortened victory on Saturday night. 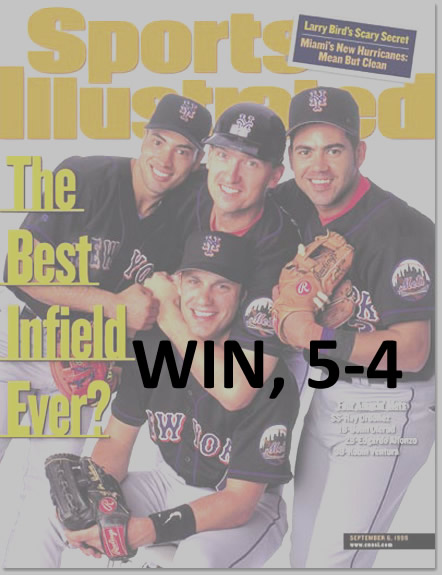 In the early going, the Mets could do nothing against Phillies starter Tyler Cloyd. After a one-out walk by Murphy in the top of the first, Wright grounded into a double play to end the inning.

For Gee, this game represented an opportunity to redeem  himself. Throughout his brief Major League career, Citizen's Bank Park has served as a House of Horrors for Gee, as he had posted a 10.38 ERA in 26 career innings there, with nine homers allowed. Perhaps buoyed by the relief of not having to face Ryan Howard, Gee was able to get off to a quick start, retiring the Phillies 1-2-3 in the bottom of the first.

While the Mets failed to do anything in the top of the second, the Phillies managed to "score" a run. After Carlos Ruiz grounded out to begin the inning, Domonic Brown and Darin Ruf both singled to put runners at the corner. Cody Asche followed them by flying out to Juan Lagares. Lagares set his feet and threw a laser to homeplate. Travis d'Arnaud received the throw and appeared to tag Domonic Brown before he reached the plate. However, he was ruled safe even though replay showed the tag was clearly applied. Gee would get out of the inning without further trouble.

After a 1-2-3 inning, Cloyd appeared on cruise control. That is until Wright stepped up..On a 3-1 count, Wright hit a drive to right field that landed in the first row of seats for a solo homer, making it 1-1. Lucas Duda followed with a walk but was stranded at first.

The game would remain 1-1 until the top of the sixth. With both starters seeming to have settled in, Murphy broke up the tie with a booming blast to right, clanking off the second to make it 2-1. Wright and Duda would reach via a single and HBP, putting two on for Lagares. He promply hit a drive into the left-center gap which Cesar Hernandez misplayed. Both runners scored and Lagares ended up at third, ending Cloyd's night. Reliever Ethan Martin would strike out Matt den Dekker, but d'Arnaud hit a line drive off the wall in right, scoring Lagares, to make it 5-1.

Gee entered the bottom of the sixth having retired 9 of 10 batters since the second. However things quickly fell apart for him. Hernandez led off with a double, and Jimmy Rollins drove him in by driving a ball to the right-center gap, making it 5-2. Chase Utley tollowed by hitting a booming double off the 400 foot sign in center. However, Rollins misjudged the ball and stayed at third. Ruiz would make the first out of the inning on a groundout, scoring Rollins and moving Utley to third, making it 5-3.  With Domonic Brown at the plate, Gee thew a wild pitch that d'Arnaud was not able to find for a second, and Utley was able to score, making it 5-4. However, Gee would retire Brown and Ruf to end the inning.

In the top of the seventh, with torrential rain coming down, Murphy lined out for the first out of the inning. Wright followed with a walk, at which point the umpires finally came to their senses and called for a delay. After a delay of more than an hour, the game was officially called.

The Mets will look to get a sweep tomorrow afternoon, as Carlos Torres faces off against Cliff Lee. 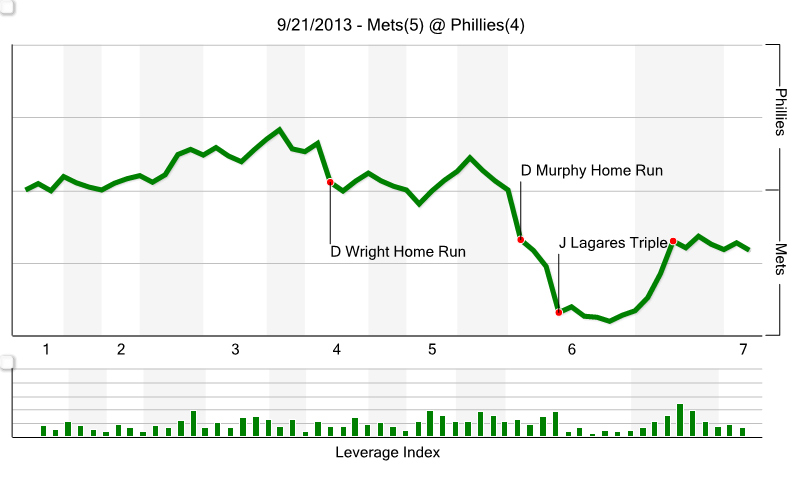