The Mets should not count on Daisuke Matsuzaka for 2014

The veteran has been good lately, but the Mets need five better options for Opening Day.

Share All sharing options for: The Mets should not count on Daisuke Matsuzaka for 2014

With Jeremy Hefner definitely out and Matt Harvey's status hanging by a thread for 2014, the Mets have at least one vacancy in their starting rotation for the season. Enter Daisuke Matsuzaka.

The 33-year-old right-handed pitcher had been pitching in the Cleveland Indians' minor league system all year before asking for his release and signing with the Mets to help eat some innings down the stretch as the team limped to the finish line. His first three starts were dreadful, as he had a 10.95 ERA with 12 strikeouts and 7 walks in 12.1 innings.

In four starts since then, however, Matsuzaka has actually been pretty good. With a 1.37 ERA, 21 strikeouts, and 9 walks in 26.1 innings, he's balanced out those first three ugly starts a bit. His overall numbers are still below average for a starting pitcher in 2013, but they're not the worst in baseball.

Heading into next season, the Mets very likely have Zack Wheeler, Jon Niese, and Dillon Gee penciled into their starting rotation. Perhaps Jenrry Mejia will be healthy and available to join them, which would be great given how good he looked in his brief return to the big leagues this season. And Rafael Montero, Jacob deGrom, and Noah Syndergaard might be waiting in the wings, but the Mets' front office has favored sending rookie pitchers to the minors at least for the first month of the season since they took over.

Things I would rather do than watch Daisuke Matsuzaka pitch 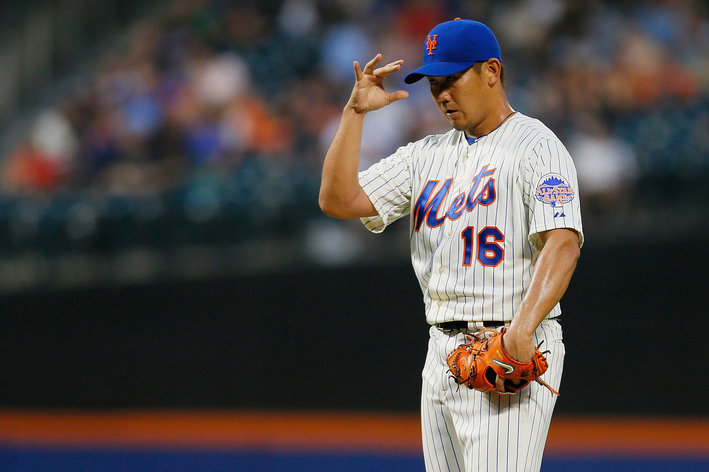 If the Mets use one of those three in the rotation to start the season, they'll obviously need one more pitcher, at least once the schedule picks up in April. But they should be able to do better than Matsuzaka, who realizes he's auditioning for a shot to keep playing in Major League Baseball.

And that's the catch. If Matsuzaka were willing to take a minor league deal with an invitation to spring training, he'd provide depth in the event that the Mets are unable to field five better starting pitchers. As good as he's been in his last four starts, Matsuzaka has struggled in the big leagues since 2009. His 5.41 ERA since 2009 is one of the worst marks in the game, and he's had a hard time staying healthy.

The Mets have bigger needs than starting pitching, of course. David Wright, Travis d'Arnaud, and Daniel Murphy are the only players on the team today who appear to be the obvious everyday answers at their positions for next year. If the team is to spend money on the free agent market—which is the biggest question of the winter—it should make its outfield, shortstop, and first base its top priorities. But it's hard to imagine there won't be another low-priced starting pitcher on the market who can do better than Daisuke Matsuzaka.