Transcript of Sandy Alderson’s interview on SNY on September 27, 2013

The Mets' general manager spoke to Gary Cohen, Keith Hernandez, and Ron Darling during the team's game on Friday night.

Share All sharing options for: Transcript of Sandy Alderson’s interview on SNY on September 27, 2013

During the Mets' game with the Brewers on Friday night, Mets general manager Sandy Alderson joined Gary Cohen, Keith Hernandez, and Ron Darling in the SNY booth for a couple of innings to talk about the team's 2013 season and future.

And here's the full transcript.

Gary Cohen: You know, it’s such a long season. You convene for spring training in February, there are certain expectations both positive and negative, you play through 160 games at this point. What is your overall view of how this team has performed versus your expectations when the year began?

Sandy Alderson: Well, there are obviously some disappointments, and yet there are some positives. Overall, I always go into a season expecting to win, and whether that’s entirely realistic or not, that’s how I go into the season. So in that sense, as we draw to a close here, I’m generally disappointed. The won-loss record, of course, below .500—twelve, thirteen games, whatever it is—particularly at home, where we haven’t played very well.

We’ve had some player performances that I would say: below-par, below expectation, choppy, certainly. And we’ve had some injuries, which always occur and have to be anticipated, but you can never really prepare for in a specific way.

But there have been some positives, too. We’ve played well on the road; I think we’re one of the few teams that has a winning record on the road, in the National League, at least. And since mid-June, I think we’re actually over .500, our overall record, if you go back to what everyone calls and I love to remember as Super Tuesday…

Gary: Harvey-Wheeler… [laughter all around]

Alderson: Yeah, that was a highlight. Since that time, we’re over. 500, which I think is a positive. We’ve seen some players emerge from our system, Lagares being an example, and we’ve some guys step up, too, somebody like Bobby Parnell. We’re on our third closer at this point of the season, and Bobby did a nice job of stepping up and certainly LaTroy has done the same.

The outfield, which was much maligned—by me, not the least of them—has done a nice job since that mid-June timeframe with the Eric Young’s addition, Lagares’s emergence, and of course Marlon Byrd was great also for us all season in both an offensive and a defensive role.

2013 Sterling awards have been announced! 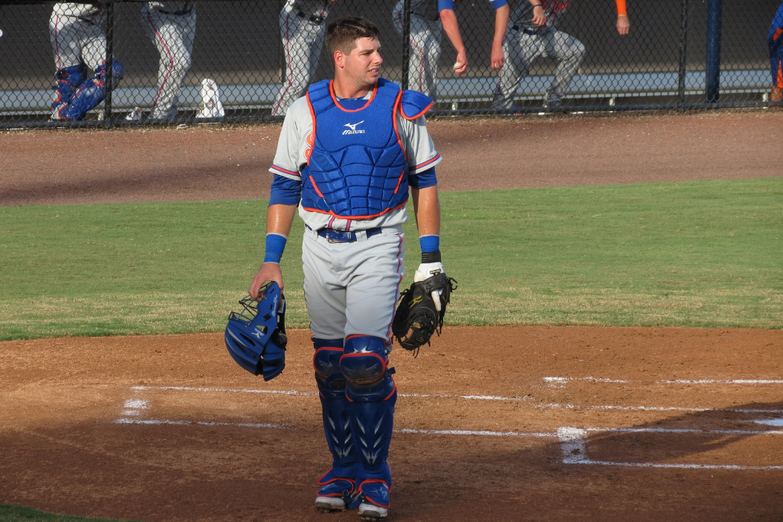 The Mets have handed out their 2013 Sterling Minor League Organizational Player Of The Year and Pitcher Of The Year awards as well as individual awards for the best players in each Mets minor league affiliate.

A big thing with the Sterling Awards tonight is that performance in our minor league system has been outstanding this year, both team-wise and individually. So there are a lot of good things to take from this, and I’m happy that we’ve finished relatively strong. We didn’t play particularly well last night and we’re losing tonight, but the games in Cincinnati, sweeping Philadelphia were also somewhat reassuring.

We had to, unfortunately, manage our payroll -Sandy Alderson

Not happy, but we’ve got something to build on. I’ve always felt that from when I arrived here through about this point, with the expiration of some contracts, that we needed to acquire and develop talent, we had to, unfortunately, manage our payroll, and try to win some games—and I think in that order. I think going into next season, that order changes. And I’m really happy that Mets fans have been relatively patient with us on that basis.

Gary: Some of the young players that you’ve been able to bring up—certainly Travis was one of the guys you expected to bring up earlier in the season but for the broken foot, but now he’s been here five, six weeks. What impressions, do you feel as though you have your number one catcher for the future? Where does he need to go from here in order to be that guy?

Alderson: Well coming into this season, the issue was whether or not he was polished enough as a receiver in order to hold down a starting role behind the plate. As we’ve experienced him—I think my observation and most other observations—he’s done a fine job behind the plate. He’s struggled a little bit offensively, but Keith can probably speak to this: when somebody comes up and doesn’t get a hit, doesn’t get a hit, doesn’t get a hit, starts to press, starts to lose their approach, starts to look for the results rather than focusing on the process, and I think that’s probably what happened with Travis.

But if you look over the last 10 games or so, he’s right at .300 and looks much more controlled at the plate. I think a lot of it has to do with the fact that he’s not played that much over the past two years, just hasn’t had that many at-bats and certainly hasn’t had many at-bats against this level of competition.

Ron: You know, Sandy, you talked about the home and away, we’ve talked about it before, we certainly don’t have any answers here. Will you address it after the season and try to figure it out?

Alderson: Yes, and this isn’t the first year it’s happened, it’s three years in a row. I think you have to look at everything from the way the team is constructed to the type of player that can play here as opposed to playing elsewhere. I think you have to look at pregame activity and a variety of things, and we’re going to be looking for input from all kinds of sources, including the players themselves. It’s something that absolutely has to be corrected. You know, we thought that changing the outfield fence would have a big impact, and it hasn’t had as great an impact as we would have hoped.

Keith: Do you feel, without Harvey—you’ve got to kind of bank on maybe not having Harvey next year, that’s still kind of up in the air, it’s a big question mark—do you still feel you have enough pitching and when you go into the offseason, what exactly are you looking for to improve the ballclub?

Alderson: Well if you were go into my office right now, on my whiteboard, I like to put players above the line or below the line. Guys that, okay, above the line, those are guys we’re counting on and don’t have much reservation about. With respect to our starting pitching, I’ve got three guys above the line. Now that doesn’t mean that there aren’t others in our system who will add to that depth. But Jonathon Niese, Dillon Gee both have pitched well and are two of those three.

We’ve got a lot of depth. I think we can go into next season with what we have. But realistically we may want to add someone. But I wouldn’t say that we would be adding someone at the top of the rotation.

Gary: We’ll move on to the position player aspect of what the Mets need to do with Sandy when we come back.

And you said before the break that you’ve got three starting pitchers above the line. After David Wright, how many position players do you have above the line?

This is not like a Sudoku puzzle, there’s not just one solution -Sandy Alderson

Alderson: Well, I’ve got a few above the line besides David. But it’s an interesting process to go through and try to be honest with yourself. And you know, you’re not going to improve at every position in one year, and you really have to make a judgment about where you’re weakest, not just where you’re strongest. And as you go into the offseason, this is not like a Sudoku puzzle, there’s not just one solution. There’s lots of ways that things could bear out, and it really depends on the market for players and putting together the right kind of package rather than putting together, in a rigid sort of way, we have to this, we have to have this, we have to have this. There are obvious places where we need to improve, but we’re going to have to have a certain amount of flexibility, as well.

Alderson: Well, there are a couple of positions where there’s an interesting decision that will have to be made. First base is one of those places, certainly. Catcher is a position that, not that we would go out and find somebody to start everyday, but you always have to be concerned about the possibility that someone like Travis—who has a history—is injured. So would there be a gap there between him and whoever else we put there if we had to on an everyday basis?

Shortstop will be another position we’ll have to take a look at. So we’ll have plenty to think about.

Gary: Other than wins and losses, when you sit here next year at this time, what’s the one thing that you’d like to see improvement in with this organization from now until 365 days from now?

Alderson: Well, I’d like to see our performance at home improve substantially. And if it does and we have any sort of reasonable record on the road, we’ll be in plus territory. But I think we’ve got to figure out a way to win substantially more games at home.

Another thing, just to put it in some perspective, I think coming into this series, we were four games under .500 at home since Super Tuesday. So theoretically, we could have played .500 at home for that period time if we had played well in this series. The only reason I’m pointing that out, when we made the moves where Wheeler came up and we got Eric Young and we played well immediately on the road, there was a question of would this continue at home. To some extent, I think it has, not perfectly. We certainly have played better over the last two-and-a-half, three months at home than we had before. That’s a positive.

Ron: We’ve seen over the last two months, Andrew Brown getting a lot of play, Mike Baxter has gotten some play. Is that important for you to evaluate your bench next season?

Alderson: Well, one of the reasons that some of these players have gotten play is that Terry has had to mix and match in the absence of other players.