Comparing the pitch framing of Travis d'Arnaud and John Buck

Just how much of an upgrade is d'Arnaud's pitch-framing ability over Buck's?

Share All sharing options for: Comparing the pitch framing of Travis d'Arnaud and John Buck

As Rob Castellano recently detailed, Travis d’Arnaud is probably pretty good at pitch framing. Most of what we know about d’Arnaud’s framing ability comes from anecdotal reports from scouts and his pitchers. We’ve also seen it with our eyes, but what exactly is it that we see?

Fortunately—or not, depending on how you look at it—for us, the Mets had a perfect counter-example doing the catching for the majority of the season. Rob noted in his piece that John Buck ranked in the bottom five in pitch framing earlier in the season and a recent update revealed that Buck remains among the bottom five. This is not new territory for Buck, who has ranked among the worst framers in baseball for years now. Let’s take a look at what makes Buck such a bad framer, d’Arnaud a good one, and then I’ll do some back-of-the-napkin math to try and quantify the difference.

One of the common traits of good pitch framers is "quiet" mechanics. This description is best understood when visualized. The above GIFs demonstrate noisy mechanics. In the full-speed GIF, look at how late Buck gets himself set up. Zack Wheeler is halfway into his delivery when Buck pops into position. Now take a look at the slow-motion GIF and notice how high Buck’s initial target is. Having the target this high causes him to have to reach down for the pitch—almost stab at it—and that momentum pulls his glove below the zone. 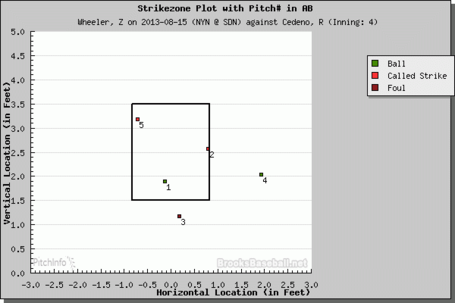 Here is the Brooks Baseball zone for this at-bat. The pitch in question is number one, which is that green square you see well inside the zone. This is clearly a lost strike, even without adjusting the expected strike zone for this batter. I love this example because on the broadcast Keith says, "Buck didn’t frame it very well." Indeed, Keith. 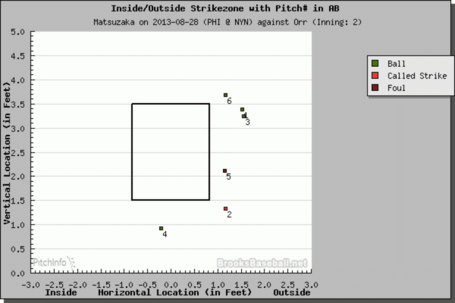 The above pitch is number two in the Brooks zone and you can see that it is off the plate, both low and away. Despite this, d’Arnaud is able to get it called for a strike. Notice how he is set up outside, absolutely still, before Daisuke Matsuzaka starts coming home. Look how the target is set low, at or below the batter's knees. When d’Arnaud catches the ball, he doesn’t stab down at it. He gets his glove in position and uses his wrist strength to snap-catch it up. His body leans a bit outside but it’s subtle enough to not affect the call. In short, d’Arnaud’s mechanics on this pitch are quiet. 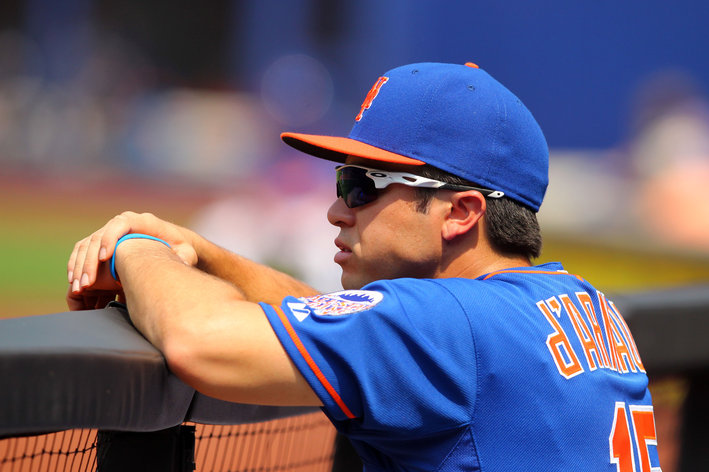 Since a proper analysis takes a bit more time and skill than I have at present, I’ll try to quantify the upgrade from Buck to d’Arnaud with a little more simplicity. It is a fact that the Mets are getting more called strikes in games caught by d’Arnaud than they were before he was called up, albeit in a much smaller sample. Using PITCHf/x data we can calculate the number of called strikes per pitch the Mets have gotten with d’Arnaud and without. When you apply the difference to an average of 145 pitches per game and extrapolate over 135 games—which is about the maximum you can expect d’Arnaud to catch over a full season—the difference is significant. It adds up to over 200 additional strikes over the 135 games. If an additional strike equals 0.13 runs, that translates to about 25 runs. If we attribute all of the additional called strikes to d’Arnaud’s framing ability (which we can’t) it would be worth around two and a half additional wins, using the standard 10-runs-to-a-win conversion.

This is, of course, too simple a calculation. As noted above there are a lot of variables we have not controlled for in addition to our sample size issues. However, we know that Buck was among the bottom five framers in baseball. Through the end of August, Buck was 14.5 runs below average at framing, or about one and a half wins. If d’Arnaud is an above average framer—as many suspect—the Mets may be looking at a two-to-three-win upgrade over the course of an entire season from his framing alone. Assuming d'Arnaud's hitting progresses as many expect it to, we may soon be watching one of the game's best all-around catchers right here in Queens.