*All results from games played on Tuesday, September 3rd, 2013*

The Pacific Southern Division winning 51s had the night off, and will prepare to take on the Salt Lake Bees tonight, in a best-of-five series. Matt Fox (8-4, 4.59 ERA) is scheduled to take on that elitist snob, Matt Shoemaker (11-13, 4.64 ERA). Las Vegas played ten games against Salt Lake ties this season, and have a .600 record (10-6) against them.

The Eastern League Eastern Division champion Binghamton Mets finished the regular season with a team-record 86 wins and 55 losses. They look to continue those good vibes with a win over the Trenton Thunder tonight at Arm & Hammer Park over in Trenton. Staff ace Noah Syndergaard (6-3, 3.00 ERA) will be taking the hill for the B-Mets, while Bryan Mitchell (0-0, 1.93 ERA) will be toeing the rubber for the Yankees affiliate. The two teams played each other seventeen times this season, and Binghamton has a winning record against them, taking ten games and dropping seven over the course of the season.

The Sand Gnats ended the regular season with a loss, but they'll look to continue their winning ways tonight, when they take on the Augusta GreenJackets in the best-of-three South Atlantic League Southern Division Championship Series. Gabriel Ynoa (15-4, 2.72 ERA) will get the start for Savannah, while the GreenJackets have yet to announce their Game One starter. The two teams played each other twenty-four times during the regular season. Savannah won sixteen games, while Augusta won eight.

After a slow start to the year, the Cyclones surged late in the season to close the gap and come neck-and-neck with the Aberdeen IronBirds for control of the McNamara Division. Brooklyn's pitching staff led the charge, allowing only six earned runs in 45.1 innings in late August. Unfortunately, the team chose the worst possible time to start a four-game losing streak, their longest losing streak of the season. Over the weekend, they lost a crucial series against Aberdeen, and lost control of the division with the sweep.

Eliminated from playoff contention, the Cyclones began their last series of the 2013 season, a three-game set against the Tri-City ValleyCats, playing for nothing but a .500-plus season. Things didn't get off to a good start for Brooklyn, as John Gant was a lot more hittable than he was in his last outing, when he fired off a complete game one-hitter. The right-hander allowed three consecutive hits to start the game, and Gavin Cecchini and Ismael Tijerina both committed errors on the same play, resulting in two Tri-City runs in the bottom of the 1st. The Cyclones turned the tables on the ValleyCats in the top of the 2nd. Mr. James Roche got things started with a single, and Matt Oberste and Edward Rohan followed suit, pushing one run across the plate. Ismael Tijerina hit into a fielder's choice that scored a second run, tying the game. Those plucky ValleyCats played a little small-ball in the top of the 3rd, and it paid dividends when Gant uncorked a wild pitch with a runner on third, allowing him to score and Tri-City to retake the lead. In the bottom of the 3rd, they added to their lead. After allowing a single, a walk, and a triple, Gant's night was done. His replacement, Cameron Griffin, allowed an inherited runner to score, putting Tri-City up 6-2.

Neither team scored in the game's middle innings. ValleyCat starter Evan Grills continued chugging along, while Brooklyn's bullpen stabilized things. In the top of the 7th, Matt Oberste hit a solo home run off of Tri-City reliever Kevin Comer to cut the deficit by one. His home run would be the last run that the Cyclones scored, though. With the loss, Brooklyn lost their 5th game in a row, and dropped back to .500

After starter Carlos Gomez got knocked around in Game Two, Kingsport needed to recover and win Game Three of the three game set for the Appalachian League Western Division pennant. Luckily, they had their ace, Robert Whalen, on the mound. For the season, Whalen compiled a 3-2 record, with a 1.87 ERA, 17 walks, and 76 strikeouts in 72.1 innings. Things got off to a good start for Kingsport. In the 1st inning, with two outs, Victor Cruzado hit a triple. The Greeneville starter, Frederick Tiburcio, struck out Jeyckol De Leon for the third out, but Astros catcher Brian Holberton was able to contain what was ruled a wild pitch- De Leon stole first, and Cruzado scampered home from third, scoring Kingsport's first run. Both starters navigated around trouble for the next few innings, until the bottom of the 6th, when Kingsport scored on a crazy play. Yeixon Ruiz walked, and was moved over to third on a sac bunt that turned into an error when Tiburcio threw the ball away. With Dom Smith batting, Ruiz strayed too far from the bag, and was dead to rights when Tiburcio threw the ball over to Greeneville third baseman Darwin Rivera. Caught in a rundown, Ruiz improbably scored, able to evade everyone's tags and haul it to home plate.

In the top of the 7th, it looked like Rob Whalen ran out of gas- he allowed a double to start the inning, and then allowed a single to pinch hitter Angel Ibanez that plated a run. Luis Rengel replaced Whalen, and promptly added more gas to the fire, walking a batter and hitting a batter to load up the bases. Without recording a single out, he was removed from the game in favor of Ricardo Jacquez. Jacquez walked his first batter- a run charged to Whalen- but was able to get the next two crucial outs. The inning ended with the two playoff hopefuls in a dead heat.

In the bottom of the 8th, Kingsport took the lead once again. Almost imitating what happened in the 6th inning, Yeixon Ruiz walked, and made it to third when the Astros pitcher- this time, Sebastian Kessay- committed an error. Jeff McNeil hit a sac fly, and with only three outs remaining, Kingsport had the lead. Jacquez remained in the game to close it out. The first batter, Angel Ibanez, grounded out to Dom Smith at first base for the first out. The next batter, Ariel Ovando, doubled to left, making things very interesting. The next batter, Thomas Lindauer, struck out swinging for the second out. Up came Brett Phillips, the Houston Astros' 6th pick in the 2012, a centerfielder hitting .242/.347/.331 for the season. Strike one. Strike two. Down to their very last strike, Brett laced a double down the line into left that tied the game. Jacquez was removed in favor of Robert Coles, who intentionally walked his first batter to set up the force out at any base. From there, things went tragically wrong. A single down the line scored the go-ahead run. Another single added an insurance run. Greeneville first baseman Chase McDonald doubled, scoring a pair. When the dust cleared, Kingsport went from the brink of moving on to the Appalachian League finals to finding themselves down by five runs. Joe Tuschak popped up to for the first out, Jeff Diehl struck out for the second, and Champ Stuart popped up, fittingly, to Chase McDonald to end the game.

Just like that, the Kingsport Mets season is over...

Tonight, the Star of the Night is us, the fans. More specifically, the Cyclones fans. For the 13th straight season, the Brooklyn faithful have packed out Keyspan/MCU Park, as the Cyclones led the NY-Penn League in attendance for the 13th straight season. All in all, given the destruction that Hurricane Sandy had on MCU Park, Coney Island, and the tri-state area in general, this validates the Cyclones season, despite their failure to make the playoffs, and the possibility of a sub .500 record. 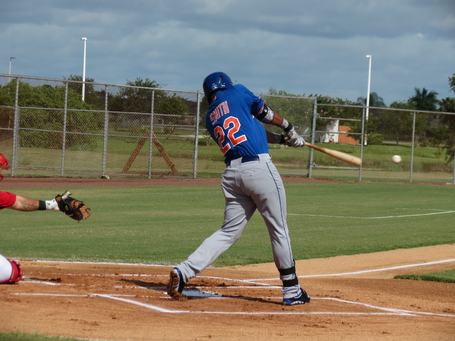 All in all, it was a good season for Mets first-round draft pick Dominic Smith. He hit .301/.398/.439 in 51 games with the Gulf Coast and Kingsport Mets. We expect good things from the teenage first baseman in the years to come. Enjoy your offseason, kid. (PHOTO CREDIT: Bryan Green)

I'm not sure who deserves more blame, Ricardo Jacquez or Robert Coles, the two relievers that let the Kingsport game get out of hand. Either way, the Kingsport Mets ended their season in heartbreaking fashion because of the bullpen's inability to put Greeneville away.