The Braves rested a bunch of starters today, and the Mets took advantage in a 5-2 win. Dillon Gee pitched another good game, while Andrew Brown and Lucas Duda hit home runs.

Yeah, the Braves played a bunch of reserve players today against the Mets. No, Kameron Loe is not a regular in Atlanta's rotation (or anybody's). Who cares? Dillon Gee pitched well, both Andrew Brown and Lucas Duda hit the ball a long way, and the Mets came away with a 5-2 win over one of the best teams in the National League! Hooray. 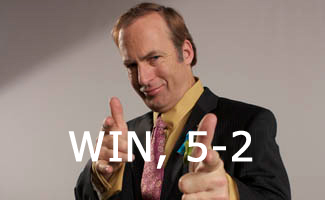 Daniel Murphy got the party started in the top of the first with a one-out triple down the right field line. Andrew Brown followed by walloping a Loe curveball over the left field wall for a 2-0 Mets lead. It looked like Gee was going to give a run or two back when he walked B.J. Upton to start the bottom of the first, but no Braves ended up crossing the plate.

Part of that was due to a terrific Juan Lagares catch to rob Justin Upton of a base hit. The younger Upton brother, who batted right behind Bossman Junior today, laced a line drive to center that was snagged on a dive by New York's budding defensive star. Gee was not out of trouble, though. Freddie Freeman hit a fly ball to deep left field that was dropped by Eric Young Jr. The error looked like it would cost the Mets a run, but B.J. Upton had headed back to second base to tag up, and he only reached third on the play even though Freeman got all the way to second.

Gee took advantage of the fortunate break by striking out both Evan Gattis and Gerald Laird with curveballs. Somehow, the Amazins had maintained a 2-0 lead, but they weren't content just yet. New York tacked on another run when Lucas Duda ripped a home run to right field to lead off the third. After Justin Turner and Travis d'Arnaud hit singles, Lagares grounded out to get a fourth Mets run home.

The fifth Mets run was scored when Dillon Gee lofted a fly ball into right-center field with two outs in the inning. Considering that catcher-by-trade Evan Gattis was playing left field, you would think that B.J. Upton would grab anything close to him, but for some reason he let Gee's fly land for a base hit. Lagares scored from second and the Amazins took a 5-0 lead.

After the first, Gee didn't hit trouble again until the fifth. Dan Uggla and Paul Janish led off with back-to-back singles, but the Mets caught another break when new Braves pitcher Freddy Garcia bunted the runners over. If the stakes were higher, Atlanta manager Fredi Gonzalez may have elected to pinch hit in that situation, but with his number one priority marked as "bullpen conservation," Garcia hit for himself and gave Gee an out on the sacrifice. The Braves did get a run across when B.J. Upton hit a sac fly, but the important thing was that the Mets avoided giving up a crooked number.

The rest of the game was pretty quiet. Garcia and Anthony Varvaro combined to shut out the Mets for the 4.2 innings that Loe couldn't get to. Meanwhile, Gee lasted seven innings with five strikeouts, one walk, and just four hits allowed. Vic Black came in for the eighth and allowed a solo home run to Freeman, but he was able to finish the frame without allowing another score. LaTroy Hawkins pitched a splendid ninth to earn the save. 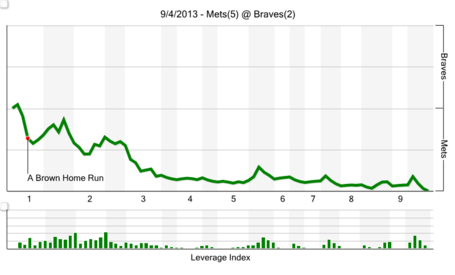