*All results from games played on Wednesday, September 4th, 2013*

Dustin Lawley started things with a bang, lacing a line drive into left with bases loaded, scoring two of the three runners on base. A few innings later, Mike Baxter tripled to lead off the 3rd, and Eric Campbell drove him in with a single to add another run to Las Vegas' total. Matt Fox had better luck than Matt Shoemaker as he put up zero after zero for the first few innings of the game. In the 4th, he lost some of his golden touch, allowing two runs to score- one on a line drive to center, and the other on a walk with bases loaded. After allowing a single in the 6th, he was removed, with a pitch count nearing 100. The bullpen had things under control until the bottom of the 8th, when Robert Carson allowed a single to Buster Posey slayer Scott Cousins, tying the game. The 51s couldn't get anything going in the top of the 9th, so the game stayed tied going into the bottom of the inning. Rob Carson got the first out on a fly ball. He then got the second out, on a groundball. One out away from extras, and...Salt Lake second baseman Matt Long hits a walk-off home run off of him. Are you kidding me?

The B-Mets scored the game's first run, and jumped out to a quick 1-0 lead in the top of the 1st, but it didn't last long, as Thunder right fielder Tyler Austin hit a double to drive in two in the bottom of the inning, giving Trenton the lead. For the next few innings, Bryan Mitchell and Noah Syndergaard traded zeroes. Finally, in the 4th inning, the B-Mets would break through, scoring two runs on hits by Wilfredo Tovar and Danny Muno. Like earlier in the game, Binghamton's lead wouldn't last long. In the bottom of the inning, the Thunder drove in a run to tie the game at three apiece. It would stay tied 3-3, and the game went into extra innings. In the top of the 10th, the B-Mets squeaked out two runs off of the man, the myth, the legend, Pat Venditte, when the righty southpaw righty southpaw pitcher allowed a sac fly and a Josh Rodriguez RBI single. Jeff Walters came in to pitch the bottom of the inning, and retired his first two batters quickly. Thunder second baseman Jose Pirela lined a double into center, and catcher Gary Sanchez drove him in, and suddenly Binghamton's lead was extremely shaky. Would Walters come through, or shades of yesterday's Kingsport game, were we about to witness a stunning playoff loss for the second night in row? When the next batter, Tyler Austin singled on a groundball up the middle, it certainly seemed like things were going to repeat themselves. Sure enough, pinch hitter Casey Stevenson hit a line drive to left to score the tying run, and Ben Gamel drove in the winning run. L'shana Tovah, you zhlub.

The game had all the makings of an old-fashioned pitcher's duel early on. GreenJacket starter Martin Agosta allowed one run through the first five innings, while Gabriel Ynoa was more stingy, and was working on a shutout. In the 5th inning, all hell broke loose for Agosta. Hits were given up, walks were issued, batters were hit, and routine plays were not made. After the dust settled, the Sand Gnats scored six runs that inning, giving them a commanding 7-0 lead. In the 6th, Phil Evans launched a solo home run, turning Game One of the series into a route. In the bottom of the 7th, Augusta finally cracked the scoreboard, loading the bases on a series of BABIP-influenced hits and driving one man in. In the 8th, the GreenJackets knocked Ynoa out of the game with a pair of line drives. Paul Sewald replaced Savannah's ace, and promptly allowed an inherited runner to score on a ground ball up the middle. He got that crucial last out, preventing any more damage from being done. The Sand Gnats negated those two runs in the 9th inning by scoring two of their own. Seward pitched a 1-2-3 9th, and the Sand Gnats won the first game of the series.

With their win last night, the Cyclones guaranteed that they will end the season with at least a .500 record. The ValleyCats jumped out to a quick lead, scoring runs off of Jeurys Familia and Miller Diaz in the 1st and 2nd, respectively. Brooklyn got one of those runs back in the top of the 3rd, when Juan Carlos Gamboa hit his second homer of the season. The Cyclones hit their offensive stride in the 5th, when they scored three runs. Tri-City reliever Randall Fant walked the bases loaded, and then hit Colton Plaia, forcing in a run. Ismael Tijerina laced a single to score another run, and Eris Peguero scored when Fant's replacement, Krishawn Holley, uncorked a wild pitch. The Cyclones bullpen held the ValleyCats at bay, and Johnny Magliozzi put the game to bed with a 1-2-3 9th inning. The two teams will meet tomorrow for the rubber game of the series, the last game of the season for Brooklyn. 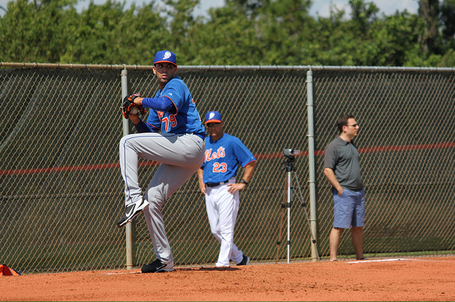 Gabriel Ynoa has pitched his way into my Top 10 Prospect list. How about yours?

They say the playoffs are all about pitching. Gabriel Ynoa proved that last night.