Catch up on all of last night's action from the Mets minor league system!

*All results from games played on Friday, September 6th, 2013*

The 51s were able to avoid elimination last night, defeating the Salt Lake Bees 3-2 at Cashman Field. Giancarlo Alvarado pitched 5.2 innings of one-run ball until the 51s were able to the lead for good in the bottom of the sixth. The Bees struck first in the top of the third as four singles in the inning translated into one run, and if not for Eric Campbell gunning down Efren Navarro at home plate to end the inning, the damage would have been much worse. Las Vegas tied the game in the fifth without a single hit as a hit by pitch, a walk, a sacrifice bunt, an intentional walk, and a sacrifice fly were the catalysts in doing so. Dustin Lawley's one-out home run in the sixth put the 51s ahead and Ruben Tejada's RBI single four batters later doubled the lead. Chris Schwinden pitched in relief and allowed the Bees to crawl within one run, but Cory Wade pitched the final 1.2 innings, striking out Roberto Lopez looking with runners on first and second to give some life to our Pacific Coast League heroes.

An amazing season goes down in flames in a matter of three days. The game remained scoreless until the top of the fifth as a Zoilo Almonte single and a Wilfredo Tovar error placed Bingo in a 2-0 hole from which they would never recover. Trenton padded their lead to 3-0 in the seventh, and despite 11 hits on the night, Binghamton was paralyzed offensively as the 15 runners stranded on base buoyed their three-game total to 36.

Steven Matz struck out eight, walked none, and allowed only one hit in seven innings of work as the Sand Gnats completed a two-game sweep of the Augusta GreenJackets last night at Historic Grayson Stadium. 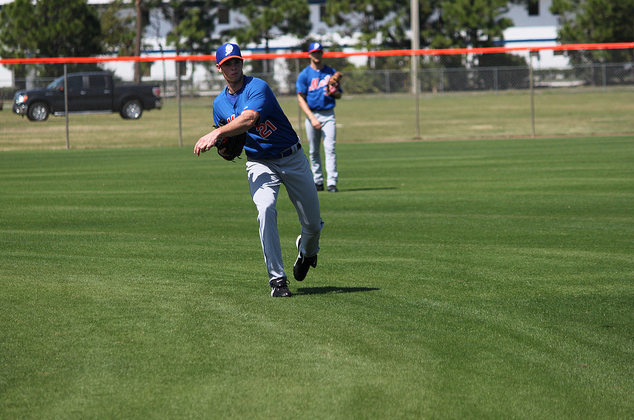 Everyone swinging a stick in Binghamton. Woof. Twelve strikeouts and fifteen men left on base is good fodder for being eliminated from Eastern League competition.