Eleven years ago a plan to disarm the Mets was hatched from an office deep within the bowels of Turner Field. An evil baseball genius concocted it, but he needed the perfect agent to execute it. He needed Tom Glavine.

"I can’t stand it, I know you planned it."—Sabotage, by the Beastie Boys

In the early evening of September 30, 2007, Tom Glavine spoke with reporters about the disastrous results of Game 162. Quoth Glavine: “I’m not devastated. I’m disappointed. Devastation is for much greater things in life.” For the thousands of Mets fans there who endured the 9–2 drubbing at the hands of the Marlins, few things in life were of greater import. For a short time, at least. Glavine was disappointed; Mets fans were destroyed.

That final game of the 2007 collapse is still a sore subject for Mets fans, but that hasn’t stopped the Amazin’ Avenue community from theorizing what really happened to Glavine that day. Were the Marlins fired up from the previous game’s festivities (recall the Jose Reyes-Miguel Olivo dustup at third base)? Maybe, but so were the desperate Mets. Did 41-year-old Glavine simply run out of gas? Also possible, but 44-year-old Jamie Moyer tossed a gem down I–95 that day to help the Phillies beat the Nationals and clinch the NL East title. Random variation and bad luck are other reasonable explanations. But there is a more sinister conspiracy theory which explains Glavine’s meltdown and also some of his Mets career: “Glavotage”, a mash-up of “Glavine” and “sabotage.”

Creation of the Glavotage theory was a group effort by members of the Amazin’ Avenue community. It evolved somewhat naturally and eventually a proper definition came about:

Glav·o·tage [noun]: The act of sending Tom Glavine to the Mets with the express purpose of destroying the Mets from within.

Glavine spent five seasons with the Mets. He signed a four-year, $42.5 million contract prior to the 2003 season, then later agreed to a one-year, $10.5 million deal which kept him around through 2007. A dreadful debut start (a 9–3 drubbing on Opening Day 2003) and even worse finale bookended a respectable run in Flushing. He compiled a 3.97 ERA, won his 300th career game in 2007, and did well for himself and his team in the 2006 postseason. Still, there was something fishy about the career Brave’s Mets tenure. 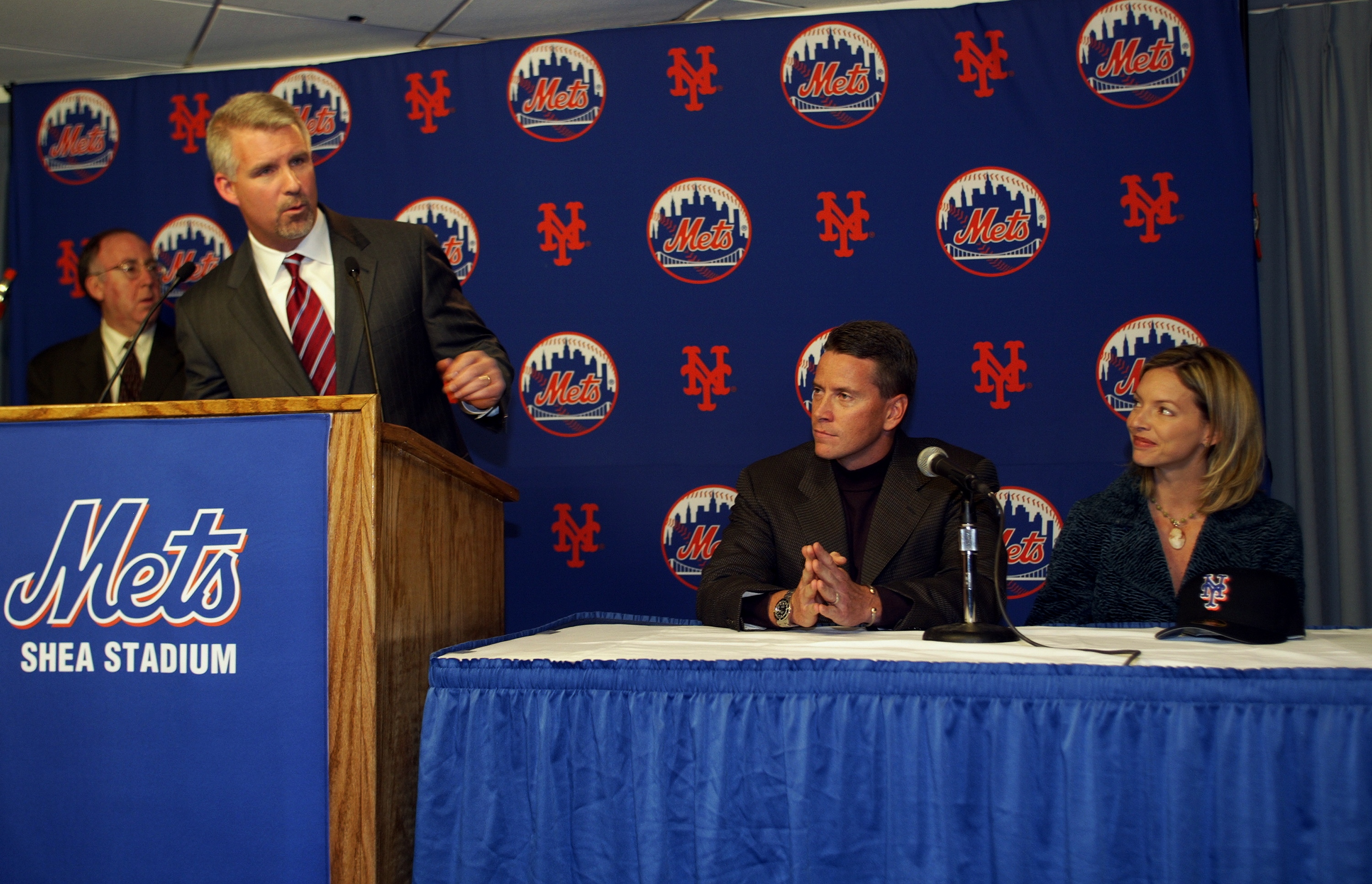 Entered into circumstantial evidence as Exhibit A for the Glavotage case is Glavine’s performance against the Braves as a Met. For his career, he tossed at least 100 innings against 15 different teams. Of that group, he posted the worst numbers against the Braves in the following statistics:

Against non-Braves opponents, Glavine enjoyed a fine 3.82 ERA. Against the Braves, he transformed into Alay Soler. Glavine spent much of his career owning the Mets, to the tune of a 2.82 ERA and a 7-inning shutout in Game 3 of the 1999 NLCS. Hopes that he could bring his rival-domination skills to the Mets were dashed time after time.

Exhibit B is the aforementioned Game 162. Exhibit C consists of unsubstantiated chatter, a staple of any conspiracy theory worth its salt. NBA truthers point to the allegedly rigged 1985 NBA Draft Lottery—Glavotage proponents assert that Glavine had a hand in the Mets’ many problems from 2003–2007. Think urging Jim Duquette to trade Scott Kazmir for Victor Zambrano; hinting to Omar Minaya that Marlon Anderson and Julio Franco needed to be locked up to multiyear deals; expressing to Mets talent evaluators that Heath Bell was too hittable, despite his gaudy peripherals; telling Mets drafters that college relievers are the next big thing; pointing out to Billy Wagner that rookies should know their place; introducing the Wilpons to Bernie Madoff. Such actions slowly devastated the Mets, although none could be totally pinned on Glavine. Sort of like Nurse Ratched subtly demoralizing the patients in One Flew Over The Cuckoo’s Nest. The quiet and unassuming appearance of professional competence masked a systematic dismantling of the promising Mets organization.

The Braves were reportedly unwilling to offer Glavine any more than a two-year contract when he became a free agent in 2002. This is generally offered as a main reason for his departure to New York. The conspiracy theorists posit that this was simply a cover for the nefarious Glavotage plan. Glavine was an aging—but not ancient—36-years-old at the time. He was the epitome of health, rarely missing a start during his career. Why would the Braves let one of their all-time greats walk when he was still an effective pitcher? Specifics of the conspiracy have yet to be nailed down, but in the name of imagination, I’ll give it a shot:

Glavotage was conceived by highly successful Atlanta Braves GM John Schuerholz during the 2002–2003 offseason. The Braves won the NL East for the 11th consecutive season in 2002, finishing with a stellar 101–59 record in a mediocre division. Chipper and Andruw Jones were performing at Hall of Fame levels, while Greg Maddux, Glavine, and John Smoltz continued to anchor a dominant pitching staff. Youngsters Kelly Johnson and Wilson Betemit were highly rated prospects in the organization, on the cusp of contributing. All signs pointed to continued success for the Bravos. But Schuerholz worried.

The Hall of Fame-caliber pitching triumvirate was aging. Gary Sheffield and Javy Lopez would likely leave via free agency in short order. Additionally, the NL East was filled with teams on the rise. Phenoms Josh Beckett and Miguel Cabrera were ready to hit the big leagues, improving a talented young Marlins team. The Phillies boasted a pair of top pitching prospects in Brett Myers and Gavin Floyd. Outfielder Marlon Byrd and infielders Chase Utley and Ryan Howard also bolstered a strong Phillies farm system. Jose Reyes, Scott Kazmir, Aaron Heilman, and a then-unheralded David Wright had the Mets, and their powerful checkbook, looking primed for a decade of dominance.

Schuerholz realized that he could no longer focus solely on improving his team. He needed to find a way to subvert his rivals. Billy Beane and the Oakland A’s had Moneyball; Schuerholz had Glavotage. Glavine was tasked to sign with the Mets and perform the following:

All this while pitching well enough overall to remain in the Mets’ rotation. Upon successful completion of the mission, Glavine would have a lifetime job waiting for him in the Braves organization, either as a player or executive. He agreed, and easily checked tasks No. 1 and No. 3 off the list. He had too much pride to blow his starts in the 2006 playoffs, much to the chagrin of Schuerholz. But Game 162 of 2007 offered a prime opportunity to atone, and Glavine came through. The Mets fell into a tailspin after that game, as their on-field and off-field embarrassments piled up in subsequent years. Glavotage accomplished. Glavine then signed a one-year contract with the Braves prior to the 2008 season and eventually became a special assistant to Schuerholz, now the Braves’ team president.

A lesser known but mildly successful part of Schuerholz’s secret destroyer plan was the trade of Kevin Millwood to the Phillies during the 2002–2003 offseason. The Braves received 26-year-old replacement-level catcher Johnny Estrada in return for the two-time 18-game winner Millwood. It seemed one-sided, but sabotage was the motivation. Let’s call this portion of the Glavotage plan “Operation Killwood”. Millwood completed task No. 1 of the plan—he successfully mailed in his starts against the Braves as a Phillie. In six starts spanning 30.2 innings, he went 0–6 with a 9.10 ERA and 1.00 K/BB ratio. Even worse than Glavine’s performance against the Braves! Unfortunately for Schuerholz, Millwood failed at tasks No. 2 and No. 3. He eventually departed to the Indians via free agency prior to the 2005 season and blew his chance at lifetime Braves employment. And the Phillies have dominated the NL East since 2007.

In reality, there is no hard evidence to back up this cockamamie conspiracy theory. It’s less plausible than the Keith Hernandez–Roger McDowell spitting incident on that infamous episode of Seinfeld. Glavine had a decent, if a bit awkward, run with the Mets. And to his credit, he has since clarified his “I’m not devastated” declaration. Here he is speaking to USA Today in April, 2008:

“If people interpreted that as me not caring, then I’m sorry about that because that wasn’t my intent, because I did care about it. I was upset about it. Like I’ve said many times, it’s bothered me more than any game I’ve ever pitched.”

Stuff happens—even Hall of Fame caliber pitchers have off days. One of Glavine’s worst happened to come at a terrible time, when the reeling Mets needed their starter to at least give them a chance. This is his legacy for many Mets fans. Others choose to focus on the stability he brought to the rotation while wearing the orange and blue. A smaller group sticks with the Glavotage theory, continuing to be leery of the calculating Braves organization and recognizing Glavine as a pawn in a larger plot. And to any member of the Mets’ new front office who counts himself among the conspiracy theorists: why can’t a Mets version of Glavotage be undertaken in the future? Johan Santana will almost certainly be a free agent after the 2013 season and will be 35 years old entering 2014. Maybe the Braves will be in the market for an aging but still effective lefty starting pitcher. “Santana Subversion”, anyone?

This story originally appeared in the 2011 Amazin' Avenue Annual.