As a low-cost signing, John Lannan is a good find.

John Lannan made his major league debut fightin' the hated Phillies, literally. The Long Beach native hit Chase Utley and Ryan Howard in successive at-bats and was ejected from the game. It was the first time a player had been ejected from his debut in nearly ten seasons.

After pitching for both the Washington Nationals and Philadelphia Phillies from 2007 through 2013, the Long Beach native has joined the New York Mets, his third National League East team. Lannan pitched four average-to-slightly-above-average seasons with the Nationals before losing his rotation spot in 2012. After that season, he signed a one-year deal with the Phillies but made just fourteen starts before a knee injury ended his season.

Looking at Lannan's career numbers, nothing that jumps off the page. He doesn't strike out a ton of guys. His control could be better but is not terrible. And he pitches at, or around, league average in terms of ERA. Before he lost his spot in the rotation to Ross Detwiler in 2012, he made nearly 30 starts in four consecutive seasons. He was never really a top-of-the-rotation pitcher, despite making a couple of Opening Day starts, but he has been better than a back-end starter. The Mets are taking very little risk in hoping the 29-year-old can provide stability to their young pitching staff.

According to the data at Brooks Baseball, Lannan has a broad repertoire of pitches, including a four-seam fastball, sinker, change, slider, curve, and, very rarely, a cutter. He mainly throws the four-seam fastball, along with his sinker and change. His fastball and sinker have averaged around 88 miles per hour throughout his career, and his speed is down about one mile per hour in recent years. His off-speed and breaking pitches offer a good change of pace, with his changeup averaging 83 miles per hour and his curve dropping down to 73. Overall, he relies heavily on the four-seam fastball and sinker. 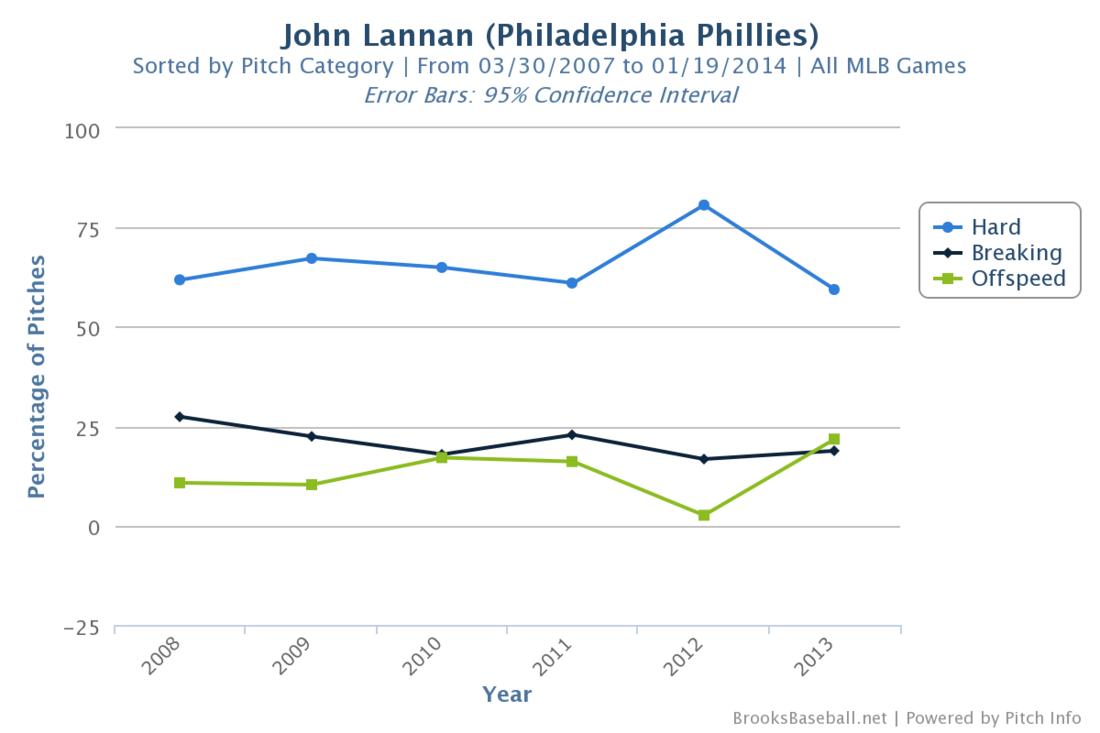 From a pitching pattern perspective, Lannan likes to use his sinker more frequently against right-handed hitters. He mixes in his changeup to righties, but usually only when he is behind in the count. Over 106.2 innings between 2012 and 2013, Lannan has relied on his curveball when ahead in the count against right-handed batters. Otherwise, he has consistently followed a pattern of four-seam fastballs to all hitters, with a higher usage of sinkers to righties and sliders to lefties. Of all of his pitches, his slider has been the most inconsistent.

The chart below, also from Brooks, shows the slugging percentage of hitters against each of Lannan's six pitches. Remember that he pitched sparingly over the past two years, so a better sample size to explore is between 2008 and 2011. Again, he saw large discrepancies in effectiveness when using his slider, but was finding a positive trend before signing with Philadelphia in 2013. Hitters seem to have the toughest time hitting his curveball, which he will throw to both righties and lefties when he is ahead in the count. 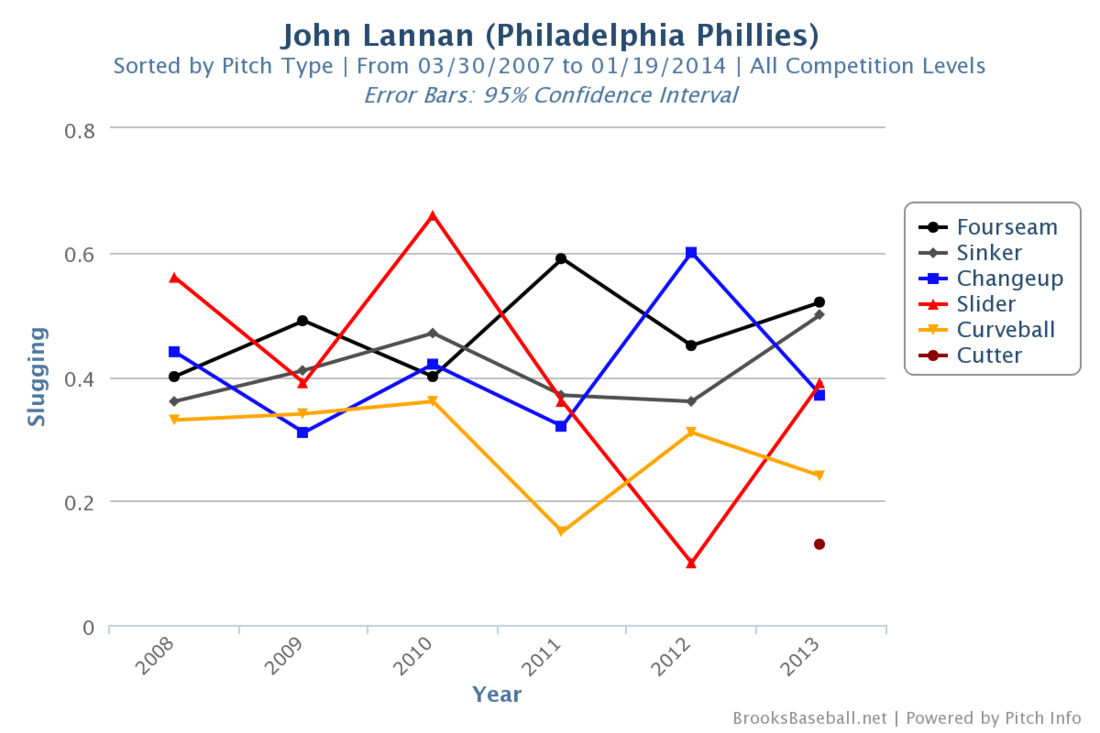 Lannan is a good fit for the Mets. He comes with low risk and low cost. He can contribute if injury strikes, as it often does with pitchers, or if the young pitchers—Jenrry Mejia, Noah Syndergaard, Rafael Montero—prove unready. He knows the National League East very well, has proven that he is capable of consuming innings, and he is coming off a knee, not an arm, injury. His is a good signing for Sandy Alderson and the Mets.