Did Mike Baxter live up to expectations in 2013? Let's look back at the Amazin' Avenue community's preseason projections to find out.

Baxter's package of patience, doubles power, and strong defense could mean that he will be the Mets' best outfielder in 2013.

Baxter's big-league success at the plate (111 OPS+) has come in a small sample (260 plate appearances), and I suppose that's my most significant area of concern. Will he be exposed with more playing time?

So things didn't go so well for our beloved Baxter this season. The community missed, big time.

With the emergence of Marlon Byrd, and eventually Eric Young Jr., Baxter didn't play much. He started just 28 games and appeared in only 46. One could make a case that he should have had more of a chance, considering his strong 2012 season, but he certainly did not distinguish himself on the field in 2013. He never got anything going at the plate, and he was a mess defensively. The latter was a surprise, considering his strong, if unspectacular, defense in past seasons.

Baxter spent most of June and July at Triple-A Vegas and continued to struggle for the big club when called back up in August and September. His time with the Mets ended when the Dodgers claimed him off waivers in October. Still, we'll always have this: 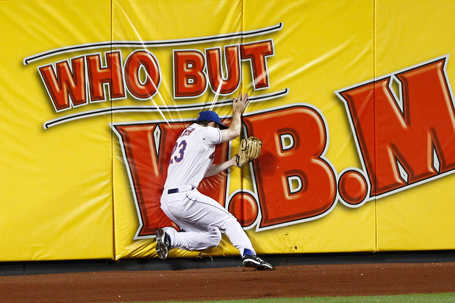 Check back in February to participate in the 2014 Community Projections.