He is not going to sell tickets, but at a reduced price, Stephen Drew would add a lot of value to the Mets at the shortstop position.

The holiday shopping season is over. That $200 splurge purchase is now marked down to half price. Of course, at the time of original purchase, somehow, it seemed worth the outrageous price. In hindsight, not so much.

The New York Mets went shopping for the first time in a long while, procuring an expensive bat in Curtis Granderson, as well as a surprising purchase in the form of Bartolo Colon. The one item that they didn’t cross off their wish list was a shortstop. And now, with baseball's early-December holiday season over, they may be able to pay the appropriate price for one named Stephen Drew.

Comparing the Mets' incumbent shortstop with the best option on the free agent market.

After receiving abysmal production from shortstop in 2013, Stephen Drew should and will be on the Mets radar.

There are only two major league teams who have received less production from the shortstop position than the Mets since Jose Reyes left town following the 2011 season. More a carousel of minor league talent than a positional strength, the Mets rank 28th in OPS, 24th in fWAR, and 17th in defensive metric UZR over the past two seasons from the shortstop position. Whether it is mistrust in Ruben Tejada, injuries, or pure lack of talent, the team from Queens could use some help at the key infield position.

Stephen Drew is coming off a World Series championship as part of the Boston Red Sox. With Scott Boras as his agent, many believed that he would sign a big-dollar deal, similar to what Jhonny Peralta got with St. Louis. But surprisingly, the market hasn’t materialized. Something that should be welcoming to Mets fans who are hoping that ownership is willing to dip into their wallets one more time for some post-holiday bargain shopping.

Stephen Drew is not a great player, but he is a pretty good player, especially considering the upgrade he would provide to the Mets at his position. In terms of everyday shortstops, over the past two years, he ranks 6th in OPS (min. 800 PA). He is not a great defensive player, but he ranks higher than Reyes in UZR since 2012. Funny enough, with similar plate appearances, he has a higher fWAR than Derek Jeter over that span as well. That may be having a little too much fun with the numbers, but the point is Drew is an acceptable player at a position the Mets desperately need support.

When Sandy Alderson considers how he can better his roster, incremental improvement is achieved by finding value add per position. Weighted Runs Created (wRC+) is an offensive statistic used to evaluate offensive production in terms of runs, adjusted to park and league average. Stephen Drew’s wRC+ of 97 since 2012 ranks 10th among shortstops with at least 800 PAs. The Mets, as a team, produced a wRC+ of 82, or 18% below league average from the shortstop position over the same span. Using historical numbers, Drew would coincidentally represent an 18% improvement offensively. Of course, defense is imperative for a shortstop, so to consider both offensive and defensive contributions, Drew’s fWAR of 3.1 marks a nearly 11% improvement over the team fWAR of 2.8 between 2012-13. 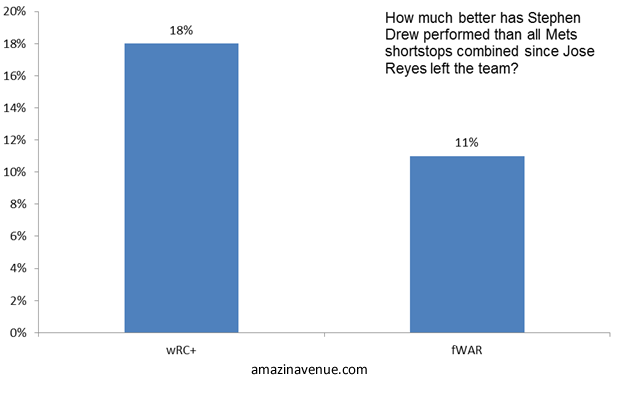 A lot of numbers to say that Drew would represent an improvement for the Mets at shortstop, which is pretty obvious without looking too deep into the numbers. What Mets fans need to consider, however, is just how much of an improvement he represents, despite not carrying a marquee name, and for the potential price he could be signed for.

In order to achieve the same value add at another position of need, Sandy Alderson would undoubtedly have to pay mega dollars. The Mets as a team ranked dead last in wRC+ and 25th in fWAR at the center field position over the past two seasons. The Braves paid B.J. Upton $75 million to play center field for them beginning last season, yet he has only produced 10% better offensively than the Mets’ center fielders—again, Drew was 18% higher than Mets’ shortstops—and Upton’s fWAR of 2.5 was lower than the 4.2 produced by the Mets since 2012. It is difficult for a singular player to outperform a team total in fWAR, yet Drew outperformed the Mets’ shortstops by 11%.

Whether Scott Boras finds a way to get his client a top dollar contract, as he always does, or the Mets refuse to commit even moderate dollars on another offseason acquisition, they definitely need to consider how difficult it is to add the type of positional value that Drew provides at shortstop. Fans can rejoice that the team finally spent some money this holiday season, but we can also hope that they are willing to bargain shop when appropriate.