Many writers omitted Mike Piazza's name from their Hall Of Fame ballots due to skepticism about his muscular physique. Did he magically become a powerhouse overnight? Today we debunk that pernicious myth.

"There was nothing more obvious than Mike on steroids," says another major league veteran who played against Piazza for years. "Everyone talked about it, everyone knew it. Guys on my team, guys on the Mets. A lot of us came up playing against Mike, so we knew what he looked like back in the day. Frankly, he sucked on the field. Just sucked. After his body changed, he was entirely different. 'Power from nowhere,' we called it."

When asked, on a scale of 1 to 10, to grade the odds that Piazza had used performance enhancers, the player doesn't pause.

That's from Jeff Pearlman's book about Roger Clemens, The Rocket that Fell to Earth. As the story goes, Mike Piazza underwent some obvious, massive, physical transformation and suddenly, he could hit homers like he was Babe Ruth. "Power from nowhere."

The story is a lie.

From upper deck to the depths: A Mike Piazza story

A story about how the catcher showed that Field Level was no place for the likes of me.

Mike Piazza and empty halls From upper deck to the depths: A Mike Piazza story

The case against Mike Piazza can be summed up in four words: 62nd round draft pick. (Yes, there's the weird back acne thing, but that's hardly worth any further attention unless you're a dermatologist.) Piazza was famously drafted in the 62nd round of the 1988 MLB Amateur Draft—a round which is so late, it no longer exists in today's draft. The only reason the Dodgers drafted him was because Tommy Lasorda, a friend of the Piazza family, persuaded them to do so. Piazza was widely considered a non-prospect, to say the least, giving pause to some. Take, for example, this section from Hall voter Tony Massarotti:

Somewhere along the line, there is every chance that Mike Piazza or Jeff Bagwell will get my vote. Right now, I have little choice but to look at them skeptically. (Again, the MLBPA sacrificed the right to be innocent until proven guilty.) [ . . . ] Piazza was a 62nd round draft pick—the 62nd round doesn't even exist anymore, for goodness sake—who turned into one of the greatest power-hitting catchers of all-time.

Do people really expect us to take guys like that at face value now? Sportswriters are dumb. But we're not that dumb. (OK, debatable.) Maybe there will someday be reason to believe that Bagwell and Piazza were clean. But given the damage that players did to their own game during the Steroids Era, they cannot honestly expect us to grant them the benefit of the doubt.

I do remember Sosa suddenly not being able to speak English before Congress, and his corked bat incident. He went from a skinny, marginal regular with little power to Superman. That doesn't happen magically. Same with the transformation of Mike Piazza from extremely late-round draft pick into SuperDuperStar.

There are plenty of stories about late-round draft picks making good. Astros ace Roy Oswalt, who wants all of Alex Rodriguez's accomplishments from 2001-03 banished, was taken in the 23rd round, for example. But Mike Piazza not only made good, he went from the black hole of the draft to greatness, the all-time homer hitter among catchers.

Thus, he did one of those near statistical impossibility things: He navigated from ultra-non-prospect to 427 career homers.

Again, I can pretend that while he was doing this people were not talking about certain physical quirks that raised suspicion, notably a back full of acne. But that, too, would be dishonest.

The problem with that story? Mike Piazza was always a slugger. The power didn't come from nowhere—it was the only thing anyone expected to happen.

Brad Kohler was a scout for the Major League Scouting Bureau from 1975 to 2005. He was the only scout to ever fill out a rating sheet for Piazza during the catcher's amateur years. In the spring of 1986, he went to a baseball game, like scouts are wont to do, and focused his attention to the guy behind the plate. He turned in the evaluation below. 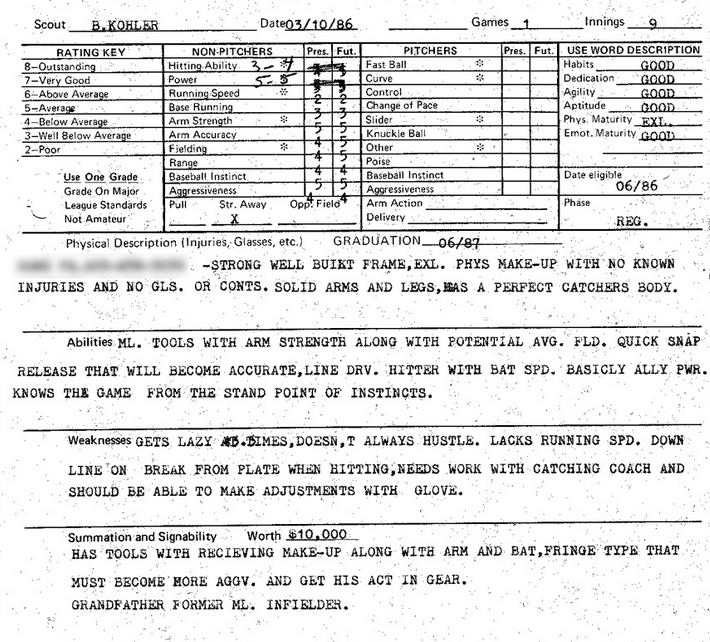 It's not so easy to see the numbers there, but suffice it to say that Kohler deemed the kid to be a slightly below average prospect all-around. Well below average hitting ability at present with potential to be "below average"—that's the 3-4 which Kohler hand-wrote in. Power is average, at 5-5, and that's echoed in the "Abilities" section: "line drive hitter with bat speed, basically alley power." This kid has a "perfect catchers body" but is a "fringe type" that needs to "get his act in gear." This is exactly the type of guy who, if he went in the 62nd round two years later, you'd consider a total non-prospect with little to no hope of developing into the guy Mike Piazza turned into—at least not without the help of performance enhancing drugs.

But that's not Mike Piazza's profile.

That's the profile of Matt Merullo, then a catcher at the University of North Carolina. Kohler gave Merullo an "overall future score" of 43.5—the context for that number we'll get to—and the White Sox drafted Merullo with the 20th pick in the 7th round of the 1986 draft. Merullo was one of nine 7th round picks that year who made it to the Show. He played parts of six seasons amassing 547 plate appearances.

Kohler visited Piazza's game the month after Merullo's. Here's the report he filed: 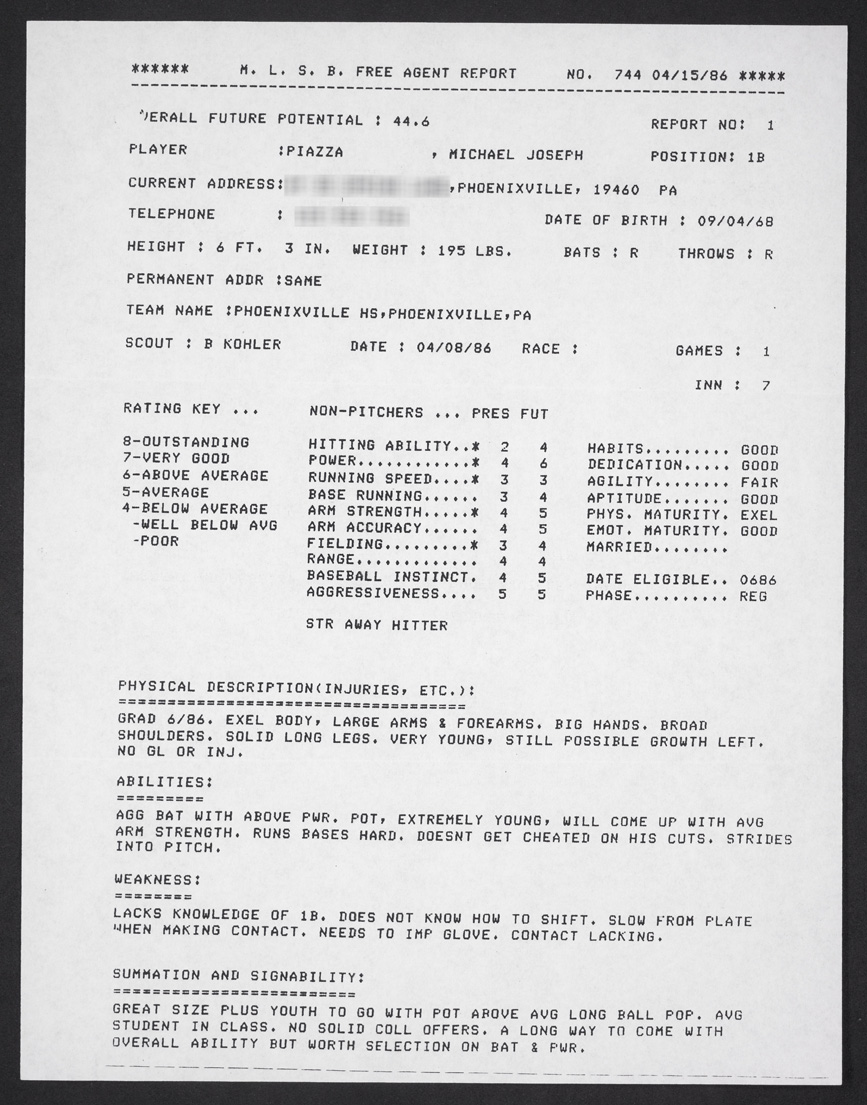 The first thing you'll note is the overall future potential of 44.6—a hair higher than Merullo's, who was not only drafted, but drafted in the first ten rounds. But let's look at the rest of it.

Then, pay attention to the abilities—"above [average] power potential." If you look at the numerical ratings, he's given a 4-6 in the power department—below average now (he's 17!) but with potential to be above average in the future. The summary specifically states that Piazza has "potential above average long ball pop" and is "worth [a] selection on bat and power."

So why wasn't he selected? Because he was a right-handed hitting first baseman who couldn't do anything else.

Look at the rest of the scouting report and it becomes abundantly clear that this is the case. Nowhere is the word "catcher" or any indicator that Piazza would be behind the plate. Instead, he's discussed as a first baseman, and one who "lacks knowledge" of the position and "needs to improve [with the] glove." He throws with the wrong hand for the position, has limited range and is slow. He isn't likely to hit for average or take a lot of walks (check out the 2-4 "hitting ability") either.

At best, he's raw. And to make matters worse, not even the colleges want him. He goes undrafted—but not because the power potential isn't there. Had he been a catcher, well, maybe his 44.6 is good enough to go in the 7th round, just like Matt Merullo did. Heck, maybe his 44.6 is higher—after all, who cares if he can't field at first if he's behind the plate? And that 4-6 power as a first baseman, does that translate to a 5-7 as a catcher? I honestly don't know. 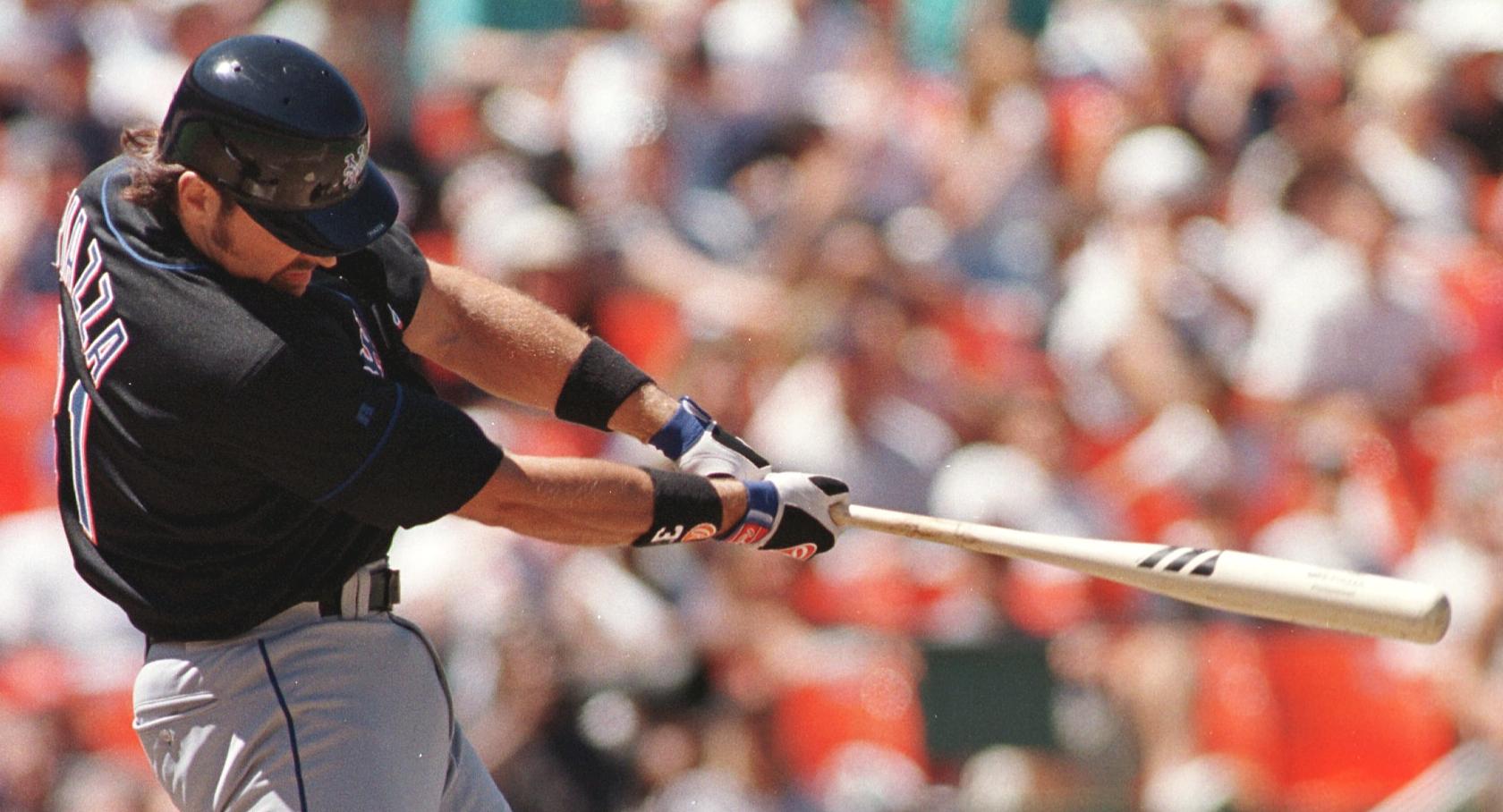 Regardless, even at a young age, there's further evidence that he could slug. If you read through his book, Long Shot, Piazza tells tales about his bombs in Little League, Babe Ruth League, and in high school. He talks about the time at age 14 or 15 that he hit a batting practice home run at Veterans Stadium (as a guest of Lasorda's). If you don't want to take Piazza's word for it, he also notes that the local paper, the Evening Phoenix, covered many of his games (and MLB ballpark batting practice sessions) and talked about his rather regular habit of hitting long home runs. Many of them are available on microfilm if you're a reporter willing to take a road trip to Phoenixville, Pennsylvania.

When he hit the pros—the minors, of course—it's more of the same. He made his debut in 1989 in the Northwest (A-) League—a league where the average batting line was .251/.341/.349. Piazza's batting line was .268/.319/.444. He bested the league slugging percentage by nearly 100 points. Tim Salmon, a highly regarded prospect (a 3rd round pick in 1989), who is a week or two older than Piazza, also debuted in the Northwest League that year. Salmon hit .245/.367/.418. Piazza outslugged him pretty easily, too. So despite the story from the anonymous player quoted in Pearlman's book, the guys who "came up against Mike" didn't see a powerless nobody. They just weren't paying attention. Piazza could rake.

The idea that Mike Piazza's power came from nowhere is a farce, one based on spurious claims and amateur dermatology amounting to exactly nothing in the way of actual evidence. If you want to know what changed, it wasn't his ability to hit homers. Learning to cut down on the strikeouts and take a few more walks certainly helped, but above all else it was his transformation from an inadequate first baseman, where offense is a requirement, to an adequate catcher, where offense is at a premium.

Power from nowhere? It's a myth.