The rookie had a breakout season at the major league level.

If you didn’t see Jacob deGrom’s excellent rookie season coming, you were not alone. The 26-year-old was not exactly highly-touted before the season began. Here at Amazin’ Avenue, we ranked deGrom the Mets’ 15th-best prospect. Mets Minors ranked him 16th, Baseball America ranked him 10th, Minor League ball ranked him 12th, and he didn’t make the top ten at Baseball Prospectus, though he was mentioned as one of the players who might play in the majors this year for the Mets. And that was essentially the consensus: deGrom could very well make it as a major league player, but he wasn’t expected to excel.

After impressing in spring training, deGrom was sent back to Triple-A Las Vegas, where he had fourteen starts to finish his 2013 season, to begin the year. In seven starts there this year, he had a 2.58 ERA and 3.73 FIP before he was promoted to the big leagues to take the roster spot of Gonzalez Germen with the expectation that he, too, would pitch in relief for the Mets.

Two days later, Dillon Gee hit the disabled list, and deGrom was slotted into his spot in the starting rotation. He then made his major league debut against the Yankees at Citi Field. In that game, he threw seven innings, allowed one run, struck out six, and walked two. But his next six starts didn’t go nearly as well, as he threw just 34 innings and had a 5.03 ERA over that span. 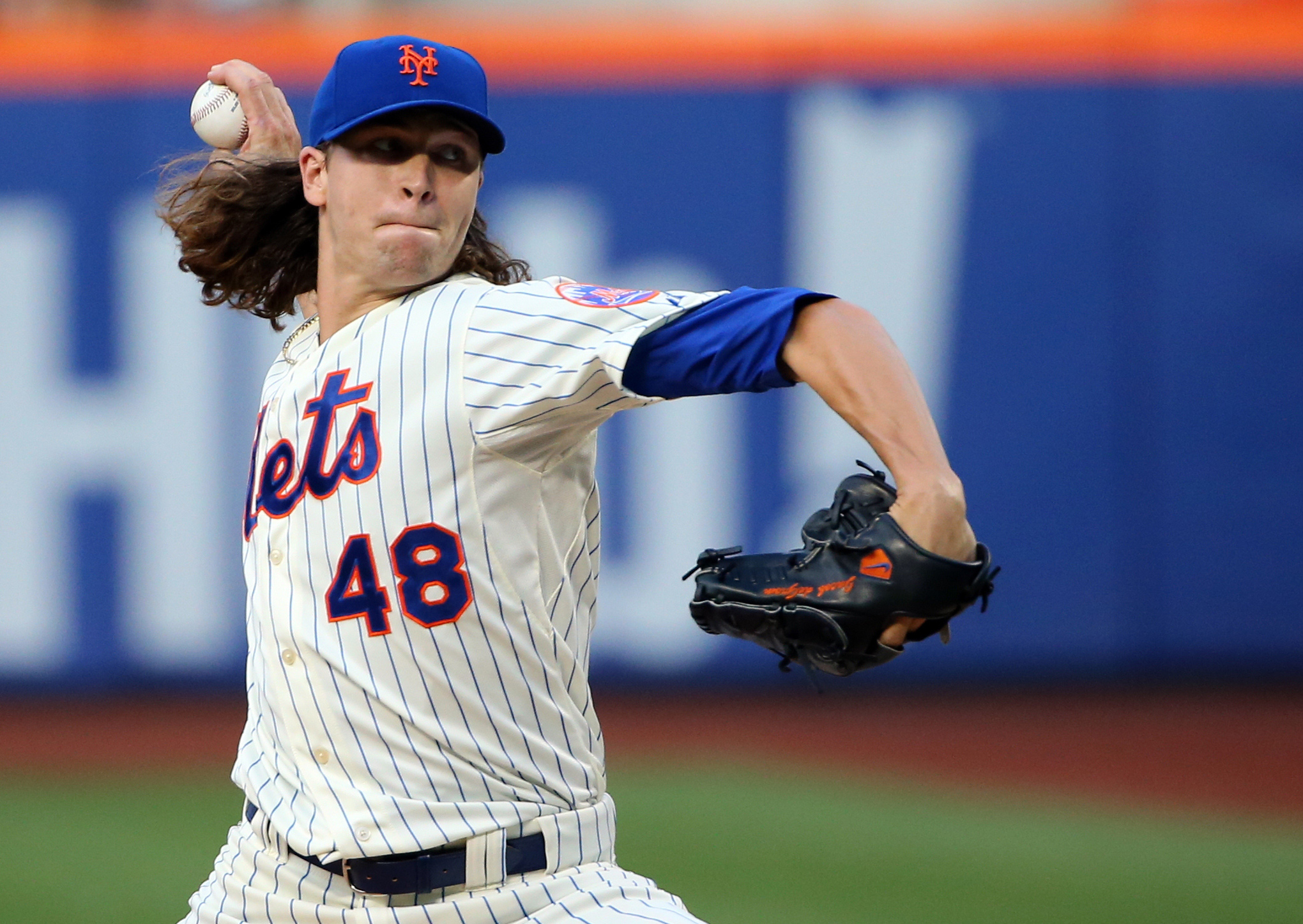 From that point on, however, deGrom was one of the best starting pitchers in baseball. He made fifteen more starts, and the results were superb. With 99.1 innings pitched over that stretch, deGrom averaged roughly six-and-two-thirds innings per start. He had a 1.99 ERA, struck out 110, and walked just 25. Opponents hit a meager .211/.263/.272 against him.

Add it all up, and deGrom had a hell of a rookie year. Over 22 starts and 140.1 innings, he had a 2.69 ERA and 2.67 FIP, struck out 25.5 percent of opposing hitters, and walked 7.6 percent. It wasn’t quite Matt Harvey’s first full season, but deGrom made himself the heavy favorite for the National League Rookie of the Year award.

Hard-throwing pitchers are not a rarity in baseball these days, but deGrom ranked 20th in average fastball velocity among pitchers who threw at least 100 innings this year. He threw that pitch often and complemented it with a sinker, slider, changeup, and curve. He was particularly effective at getting swings-and-misses with the changeup, which he learned from Johan Santana when the two were rehabbing in Port St. Lucie at the same time.

While deGrom’s emergence didn’t quite make up for Matt Harvey’s season-long absence following Tommy John surgery, his starts were a great reason to watch or listen to a game. And his emergence as a major league pitcher makes it a easier for the Mets to deal one or more of their other starting pitchers if they so desire this winter.

Desired 2015 role: Co-ace, alongside Matt Harvey, who matches his overall results from this season.