Mets fans remember where they were for two of Carlos Beltran's biggest moments in Mets games.

All Mets fans can remember where they were that night in autumn 2006 when Adam Wainwright dropped an eyes-to-knees curveball on Carlos Beltran, falling into Yadier Molina’s glove as our hearts fell into our stomachs.

Despite all the success and excitement of that 2006 Mets team, it’s that one moment, the heartbreaking instant of their elimination, that sticks out the most. The Amazins won 97 games that year, captured the NL East title, and swept the Dodgers in the Division Series before falling in a seven-game NLCS against a Cardinals team that won just 83 games in the regular season. Beltran, following a fantastic regular season output of 41 home runs, 127 runs scored, 116 RBI, and a 150 OPS+, actually performed pretty damn well in October. He swatted three home runs with a 1.054 OPS in the NLCS battle with the Cards and was even responsible for the Mets’ lone run in the ill-fated game seven.

But the season came down to that bottom of the ninth at-bat against the rookie right-hander Wainwright, with two outs and the bases loaded, facing a two-run deficit. The team MVP failed when we needed him most, and didn’t even muster a swing against Wainwright’s devastating curveball.

Of course, the Mets’ failure to advance that year cannot be pinned solely on the Beltran strikeout. Matthew Callan’s refreshing dose of objectivity and sanity on this issue exposed how there were many factors working against them in that series, not the least of which was Aaron Heilman—who had replaced faltering closer Billy Wagner—surrendering a tie-breaking two-run home run to 23-year-old Yadier Molina in the top of the ninth. We focus on Beltran, though. The team’s best player managed to find himself in the center of a huge moment in Mets history and froze like a deer in headlights.

Beltran signed a seven-year contract with the Mets following a breakout 2004 season in which he hit 38 home runs and shined in his first appearance in the postseason spotlight. In June of that year, the Houston Astros acquired the 27-year-old switch-hitting center fielder from the Royals as the centerpiece of a three-team deal, in which they only sacrificed a couple of familiar but unspectacular names in Octavio Dotel and John Buck, oddly enough. Free from the losing atmosphere of Kansas City, Beltran took off in Houston. He smacked 23 long balls and stole 28 bases in just 90 games after the trade, compiling a .258/.368/.559 slash line; he then thrashed his way through the postseason to the tune of a .436 average and eight home runs in 12 games. The Astros’ playoff run was cut short by none other than the Cardinals, as St. Louis silenced Beltran in a game seven NLCS victory.

During the ensuing offseason, in the heart of his prime and having just earned national attention for his postseason prowess, Beltran signed a seven-year, $119 million dollar contract with the Mets, the biggest in franchise history at that point. His steady ascent to superstar status was temporarily abated in his first year in Queens, though. His graceful, outwardly assured playing style appearing nonchalant to the intensely-scrutinizing eyes of the New York media and fans, leading some to prematurely label Beltran a bust as his performance dipped significantly. His power faded, his walk rate dropped, and he ended up hitting a solid-but-not-$100-million-worthy .266/.330/.414. After shaking off his rough first year, Beltran positively exploded in 2006 with an MVP-worthy performance and teamed up with fellow Puerto Rican native Carlos Delgado to lead the Mets to their first playoff run since 2000.

The Mets haven’t made it back to the postseason since then, making the sting of that ‘06 series and its final out even more enduring. Beltran’s Mets career ended in 2011 when he was traded to San Francisco; and while his overall performance through seven distinguished (though injury-plagued) seasons in Queens leaves him among the five best position players in franchise history, many fans’ memories of him are embittered to a certain degree by that notorious backwards K against the Cards. 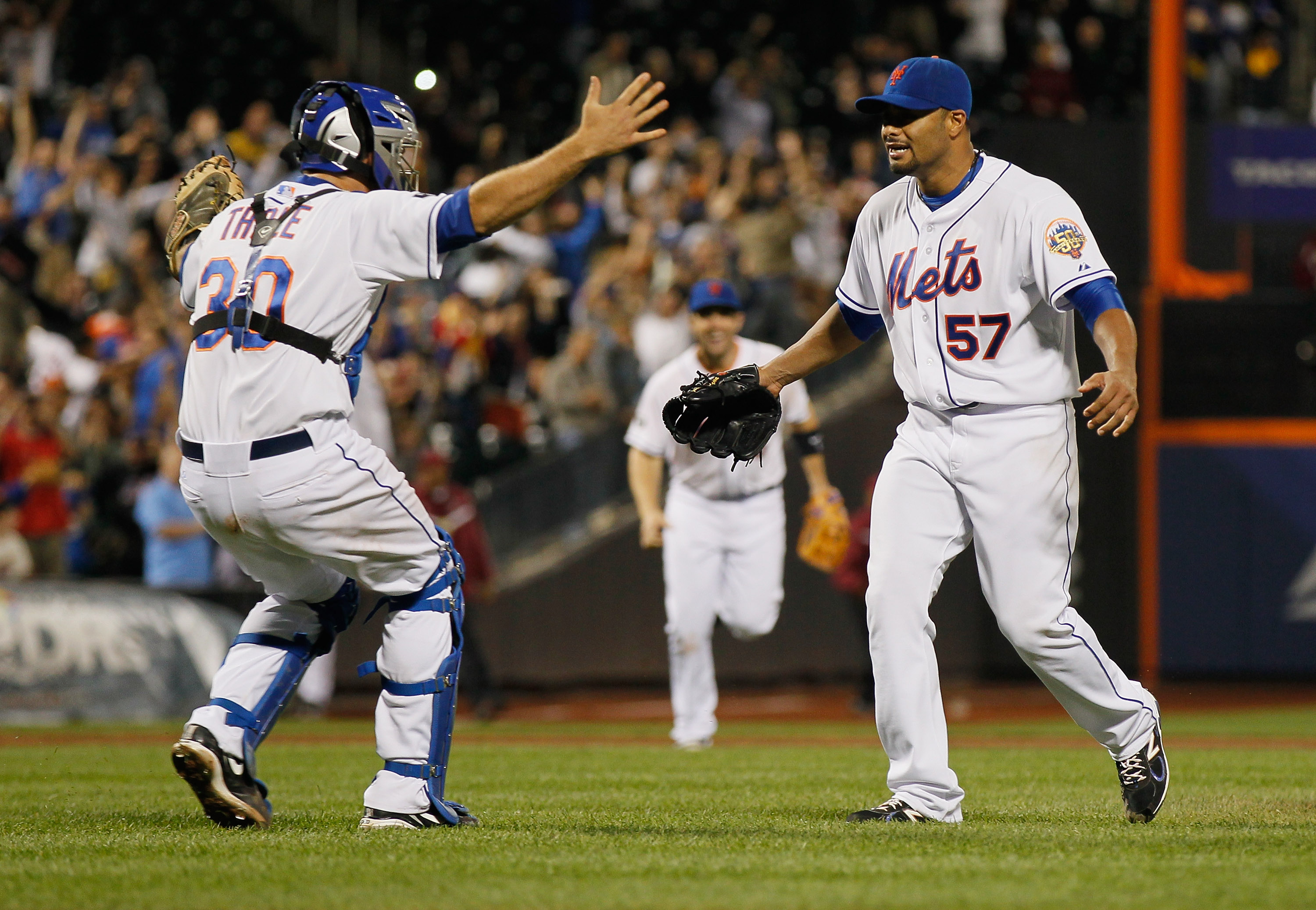 All Mets fans remember where they were that Friday night in 2012 when Beltran returned to Queens for the first time since his Mets career had ended.

Once again Beltran found himself at the center of one of the biggest moments in Mets history. Leading off the sixth inning against Johan Santana, he laced a curving liner that smacked the chalk of the left field foul line. It would've been the visiting team’s first hit of the game, except umpire Adrian Johnson erroneously ruled it a foul ball. Replay review having yet to be instituted in the rule book, the botched call enabled Santana to continue his pursuit of what eventually became the first ever no-hitter for the Mets' franchise.

Not only did Santana mow down the mighty Cardinals—holding them hitless and striking out eight while walking five—but Mets hitters got to beat up on Wainwright for seven runs. Beltran’s apparent double was cancelled. Yadier Molina’s seventh inning deep drive to left (oh no, not again!) was snatched by Queens native Mike Baxter in collar bone-cracking desperation. Had the baseball gods granted the Mets a smidgen of redemption?

Considering how the memories and repercussions of that painful 2006 playoff defeat lingered in the minds and hearts of Mets fans to that point, it does strike one as pretty curious as to how the momentous 2012 no-hitter unfolded. The 2006 defeat at the hands of the Cardinals in that NLCS was the Mets’ last playoff appearance and, following epic late-season collapses in 2007 and 2008, they were in the midst of a long (and still ongoing) stretch of losing seasons. While there have been some enjoyable individual accomplishments along the way—Jose Reyes’s batting title, R.A. Dickey’s Cy Young, Matt Harvey’s huge breakout—the Mets of the 2010s have trudged a vast desert of losing and frustration.

In the middle of that span of losing and typical #LOLMets embarrassment came that one shining moment. The importance of Johan’s no-hitter cannot be overstated. Frame that one game. It was about as rewarding and memorable a regular season game as the Mets have ever had—a pitching-rich franchise finally achieving its first no-hitter, during its 50th anniversary season.

That Terry Collins lifted the reins off Santana, who was coming off shoulder surgery, speaks volumes about the historical importance of that one game. Always a palpably intense competitor—he famously pitched with a torn meniscus while trying to carry the Mets back to the playoffs late in 2008—Johan literally pitched until his arm fell apart that night. Afterward, he told the New York Times, "I know how much this means to New York and to the New York Mets." That game most likely ended his major league career (he had an 8.27 ERA in 10 starts afterward and hasn’t returned since).

One historic June game during a lost season doesn’t make up for losing a pennant, of course. And yet I see the ’06 failure and the Johan no-hitter as bookends in some weird way. The no-hitter, and a big blown call going against Beltran to make it happen, seemed to allow some semblance of closure for autumn 2006.

When Beltran returned to Queens as a St. Louis Cardinal, he was asked about Mets fans who were still upset about the 2006 strikeout. His response: "Get over it." He told the Daily News:

A montage of his Mets career, excluding the Wainwright strikeout, was displayed before the game and Beltran actually received a mostly warm welcome from fans. He was starting in center field for St. Louis, the first time all season that he manned his old position.

In his first plate appearance, Santana threw a pitch that severed Beltran’s bat. Mets announcers caught Beltran lamenting, "that was my favorite bat." It would be that kind of night for Beltran and the Cardinals.

Beltran led off the sixth with that now-famous line drive to left and his normally stoic face expressed a hint of shock and frustration when ump Adrian Johnson called it foul. Third base coach Jose Oquendo and manager Mike Matheny argued vociferously for a bit, but the call would stand. A recent study of no-hitters by Zachary Levine at Baseball Prospectus indicates that, at that stage in the game, there was less than a five percent chance of Johan completing a no-hitter.

Yet the blown call would loom large. The Mets' broadcast booth noted its potential historical importance immediately after it happened. Beltran’s would-be double and his role at the center of another historic Mets moment received plenty of media attention in the aftermath of the no-hitter. Some considered the achievement to be tarnished but, as Matthew Callan wrote, "Attaching an asterisk to Santana's no hitter obliquely insists that every other no hitter has been free from questionable calls, an assumption that is specious at best." It wasn’t even the only blown call in that ballgame: While it had little impact on the no-hitter, replays showed Shane Robinson was clearly struck on the hand in the eighth; the home plate ump missed it and he eventually struck out.

The next-closest opportunity to break up the no-no came in the seventh when Yadier Molina launched a pitch to deep left that looked like it would go over Mike Baxter’s head. Instead, Baxter risked life and limb to assure the no-hitter would continue, smashing into the wall after reaching out to make the catch.

With two outs in the eighth, Santana seemed to be running out of gas in his valiant effort to make Mets history. After Terry Collins went to the mound to check on him and said "you’re my hero," it was Beltran who he had to face next. After getting ahead on him with two strikes, Santana got Beltran to hit a weak liner to second. One could only imagine how much hate would’ve rained down upon Beltran had he broken up the no-hitter at that crucial point. Santana cruised through a perfect ninth, and history was made.

The Cardinals were the defending champs and would eventually go on to another NLCS that year. The Mets finished fourth in the division and had their fourth-straight losing season. But perhaps some vexing ghosts were exorcised that night. It’s certainly peculiar that all three figures—Beltran, Wainwright, and Molina—from that final agonizing moment in ‘06, the very last playoff pitch at Shea Stadium, were there to face the Mets in Queens that night, only to be thwarted. Despite Beltran’s best efforts to the contrary, the baseball gods saw fit to allow the Mets a hint of retribution.

The 2006 Game 7 loss and the 2012 no-hitter remain linked in my mind. They are perhaps the two biggest moments in the last decade of Mets baseball, and Carlos Beltran will forever be linked with both.