The 28-year-old's role is largely contingent on what Ike Davis does.

The end of 2013 saw Lucas Duda in the role he was most comfortable with: Mets first baseman against right-handed pitching. With Ike Davis seemingly on the outs, it looked as if Duda would open 2014 in the same capacity. However, the trade market for Davis did not turn up anything worthwhile, and the Mets now seem committed to giving him another chance.

This leaves Duda in a precarious situation. Reports early in the offseason suggested that if both Davis and Duda remained with the Mets, one would begin the season at Triple-A Las Vegas. But it now appears that Duda may once again be used as an outfielder. This would be an unfortunate development for Duda and the Mets.

Despite having a career 115 wRC+ (.246/.342/.424), Duda has been worth -0.8 fWAR. This is primarily because Duda is incapable of playing the outfield. Since 2010, Duda has logged 1896.2 innings in the outfield and graded out at a ghastly -34.2 UZR/150, while DRS had him graded out at 43 runs below average. While defensive stats are flawed, there is more than enough visual evidence to suggest that Duda has no business playing the outfield at this point in his career. Duda's fielding at first base, albeit in a smaller sample size, is much better, grading out slightly above average according to both UZR/150 and DRS.

Duda briefly took over first base after Davis's demotion but subsequently suffered an intercostal strain on June 22, which kept him out for a month. The Mets opted to keep him in the minors for a while, but he returned to the active roster on August 24. Davis's oblique injury allowed Duda to finish the season as the Mets first baseman against righties. 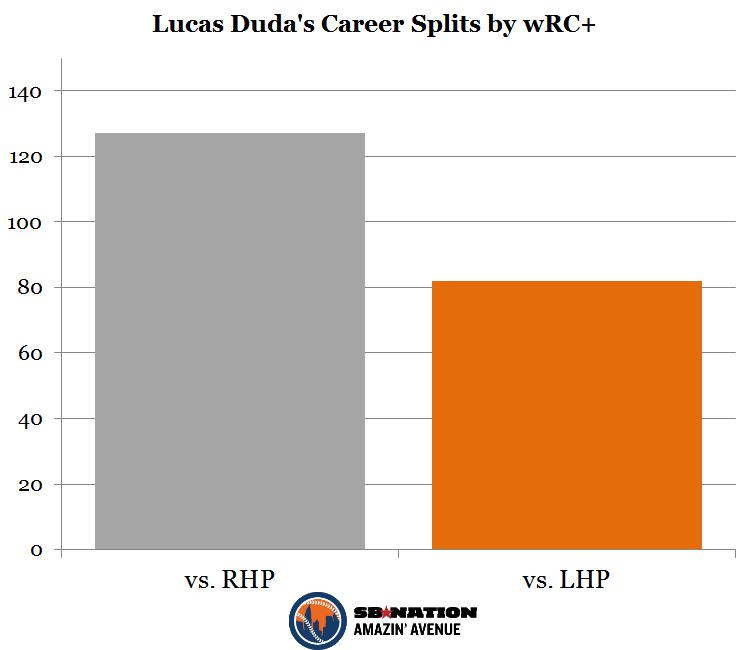 2014 represents a critical year for Duda's big-league career. Given his inability play a position besides first base, his platoon splits, and rather modest power, his value will always be limited. For the Mets, though, Duda has additional value because he's an average player on a team littered with below-average players, and at $1.63 million, he isn't cost-prohibitive. Another important factor is that while Duda's ceiling is lower than Davis's, his floor is almost certainly higher, which may be enticing to a Mets team that has seen sub-replacement level production from Davis in the first half of each of the last two seasons.

If the Mets decide to use Davis at first base to begin 2014, it could have an effect on more than Duda's short-term value. The Mets tried to shop Duda this offseason, and he didn't generate much interest. A season where Duda receives little playing time while being shuffled back and forth between the majors and Triple-A would further reduce his value and possibly his perception among MLB teams.

The best scenario for Duda and possibly the Mets would be for the team to find a suitor for Davis and use Duda exclusively at first base against right-handed pitching. That seems unlikely to happen, and Duda seems destined to open 2014 as a man without a position—and possibly a roster spot.