We kick off our prospect showcase series with a look at the bottom five spots in our Top 25.

It's that special time of year again when the eyes of the industry turn towards the best and brightest young talents around the game -- and rank them.

That's right; it's prospect season. And that's no small potatoes here at Amazin' Avenue, where we'll of course be featuring our annual prospect ranking series over the course of the next couple weeks. Each morning we'll review our next installment, replete with 2013 statistics, full commentary from the staff, and perhaps the best collection of images of Mets prospects on the web.

While this song and dance is nothing new, it's worth noting that the ranking process itself has changed a bit compared to what we've done in the past. Namely, we're utilizing our very first aggregate rankings in 2014.

Montero and Flores led the way in the PCL in 2013

In short, the collective high-water mark of the group continues to rise thanks to the efforts of the most knowledgeable collection of Mets prospect hounds on the internet. The continued growth in the quantity and quality of the AA minor league community at large has been mirrored in the enthusiasm and level of overall knowledge of the minor league staff. The team's widening scope and broad array of individual insights have come together to form, in my view, our strongest and most well-rounded rankings yet.

Obviously, regardless of just how we got there the final product won't look any different for you, the reader -- just a minor programming note for those of you who like to know how the sausage is made.

One thing that won't change is that I continue to encourage each and every reader to share his or her views each day. Feel free to provide your own rankings. Tell us why we're right -- or why we're wrong. Or just share a GIF. The strength of this community -- and the reason why it's depth of knowledge is unmatched -- is that the knowledge flows so freely in both directions. It's not uncommon that some of the best content appears in the comments section, well below the story proper. I'm always impressed by the level of enthusiasm for prospect season and once again look forward to reading the contributions of the community.

So now without any further ado, the 2014 Amazin Avenue Top 25 Mets Prospect Rankings:

Drafted by the Mets in the third round of the 2013 MLB Amateur Draft (Cypress Woods HS - TX).

The Mets took another raw, highly projectable high school pitcher in Meisner with their third overall selection in 2013. His 6'7", 190 lbs frame oozes projectability. He flashes similar top-tier stuff as fellow high draft pick Andrew Church and possesses a similar impact ceiling. The 17-year-old from Texas has regularly featured a fastball in the low-90s, though like most long-limbed pitchers he's had issues repeating his delivery—which cuts into velocity. His change-up and curve also both show good promise, but require a lot more polish before they can become reliable secondary offerings. Despite a solid 3.06 ERA in ten starts in the GCL, Meisner has a long way to go in his development. Another lottery ticket here.

Drafted by the Mets in the thirteenth round of the 2011 MLB Amateur Draft (Westchester HS - CA).

The 20-year-old right-hander was outstanding in 2013 and may have been the best all-around starting pitcher on the Cyclones staff. He posted a 2.06 ERA while striking out 64 batters in 70 innings pitched, not to mention an impressive 4% walk rate. In short, the 2011 13th-rounder out of a California high school began to make good on his long-term potential in 2013. At 6'4", 210 lbs Gsellman is beginning to really tap into his size and athleticism, consistently working in the low-90s and touching the mid-90s (he maxed out around 90 MPH when he was drafted). He also features a relatively polished curveball/changeup combo as well as a strong feel for the entire repertoire. The size, strong fastball, and good secondaries are all good signs that if he can continue to maximize his projection Gsellman has a shot as a starter at the highest levels.

"I would have lost money betting on which of the Mets troika of late-round 2011 prep picks (Matt Budgell, Christian Montgomery, and Gsellman) would end up the best pro. Budgell is out of baseball, and Montgomery was suspended for most of 2013, while Gsellman put in yeoman's work at three levels. Gsellman is a very good athlete that repeats his delivery well and pounds the zone with a low-90s fastball that can touch 94-95 when he wants to put a guy away. The offspeed offerings are works in progress, but he will flash an above-average change-up and curveball, with the change currently being the more consistent pitch. He hasn't had sustained success outside of short-season ball yet, so there's some risk here, but Gsellman could be a future #4 starter." 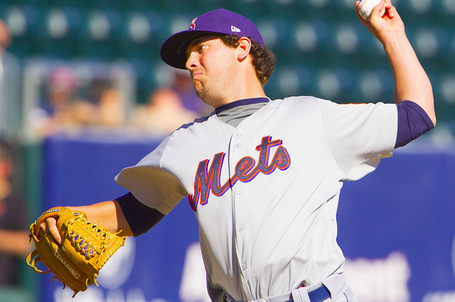 Drafted by the Mets in the fifth round of the 2011 MLB Amateur Draft (University of Massachusetts - Lowell).

There hasn't been a more unique prospect in the Mets system in recent memory than the 23-year-old Leathersich, who posted a conspicuously poor 7.76 ERA in 28 appearances for Las Vegas. And yet despite that performance the 5'11" lefty gets as much ink as anyone. Why? Because of the strikeouts. Following a ridiculous 39% strikeout rate over his first two seasons he struck out a remarkable 37.5% of batters faced between Double-A and Triple-A in 2013 -- a rare feat in the higher levels of the minors. Unfortunately, he also saw his somewhat wobbly command continue to erode at each new level as he issued free passes to a staggering 19.6% of batters faced in Las Vegas.

Compounding our efforts to project Leathersich is the fact that his stuff doesn't quite match the numbers. Specifically, he isn't really a guy trying to harness a bazooka arm like you might expect. Instead, he works a good fastball in the low-90s -- that can get up to 95 MPH -- and pairs it with a solid, but unspectacular slurve. The rest of the equation derives from a deceptive delivery that hides the ball extremely well. Even more confounding is the extreme reverse-platoon splits over his career meaning a dominant LOOGY isn't likely in the offing.

Now generally deception isn't as effective at the highest levels. For that reason I do worry about Leathersich's ability to continue to fool hitters as he transitions to the bigs; not only did the walk rates jump in Triple-A but batters found him a lot easier to hit (see, .276 opponent average). While he's continually shown the ability to make adjustments at each level, I worry that expectations based on flashy numbers might not match reality. That said, we can't ignore the ignore the incredible strikeout totals and the stuff isn't exactly pedestrian from the left side. Leathersich could still end up as an impact relief arm -- if not the dominant relief ace some anticipate -- but he may need a much longer lead time than generally expected to adjust to the best hitters in the world. 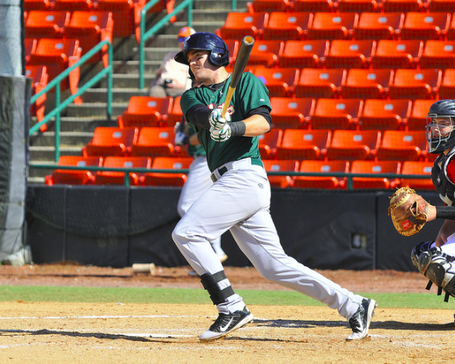 Drafted by the Mets in the sixth round of the 2012 MLB Amateur Draft (Florida State University).

2013 was a very big year for Boyd who stamped his ticket as a legitimate prospect in the system. After batting .361 as one of the best hitters in the South Atlantic League in the first half, Boyd went on to post a .292/.372/.421 line in 58 games for St. Lucie. Just as in his pro debut, the 23-year-old continued to feature an outstanding eye at the plate (10.8% walk rate) and premium bat control (12% strikeout rate) which together give him some of the better plate discipline in the Mets entire system. Lacking much footspeed he doesn't profile at any other positions, though his glovework at first is strong. The bigger issue is that he hasn't featured the kind of over-the-fence pop required of a first baseman, knocking nine longballs in 2013. He'll hope to climb the chain as a patient hitter in the Lucas Duda mold -- though he's a righty -- ideally picking up some pop along the way as the big lefty did. 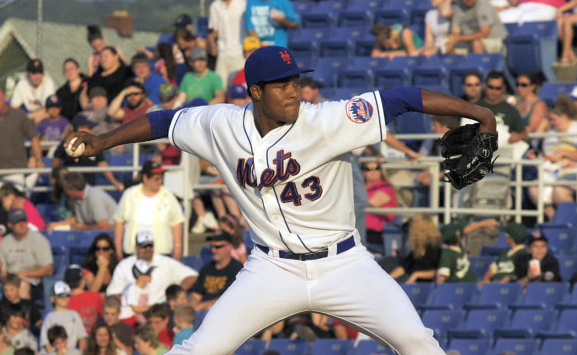 Signed with the Mets as an international free agent on June 7th, 2007.

It was something of a lost season for the 24-year-old Dominican, who looked primed to take the next step as an impact reliever for the big club early in 2013. While he still looked a little rough around the edges -- the mechanics remain spotty and the secondary mix inconsistent -- the dynamic righty seemed to find a home at the back of the bullpen where he could truly unleash his power stuff. Unfortunately, right elbow surgery to remove bone chips ended his campaign by the middle of May. He made it back for a brief look in September and also took part in the Arizona Fall League following the season. Though the results weren't exactly pretty (6.48 ERA in eight games) the most important takeaway was that the velocity/stuff rebounded nicely. Coming into 2014 Familia remains a very intriguing option at the back of the 'pen. Though he has not reached the heights we once hoped for Familia remains one of the most powerful right arms in the organization.

"I'd like to rank Familia higher, but the right-hander has yet to really come into his own despite flashes of brilliance here and there. When he's on, he's on- but the problem is that, be it injury, ineffectiveness, or something else entirely, Familia just hasn't been able to get into the swing of things over the last couple of years. The potential for him to be dominant is keeping him on this list, but with so many questions surrounding him, Familia needs to finally put everything together and silence the critics."