Mets Stat Of The Day: Ralph Kiner, best slugger ever?

Not truly a Mets stat, but being an adopted son of the franchise, all of Ralph Kiner's exploits are relevant to fans of the orange and blue.

Share All sharing options for: Mets Stat Of The Day: Ralph Kiner, best slugger ever?

A lot has been said about Ralph Kiner of late, here and elsewhere. There's even been a Mets Stat of the Day detailing the extraordinary pace at which he hit home runs over the first eight seasons of his career. (Spoiler alert if you haven't seen it: He was the best.) However, I decided that a little more attention was owed to such a stupendous feat.

Once again, spoiler alert: Kiner was the best. 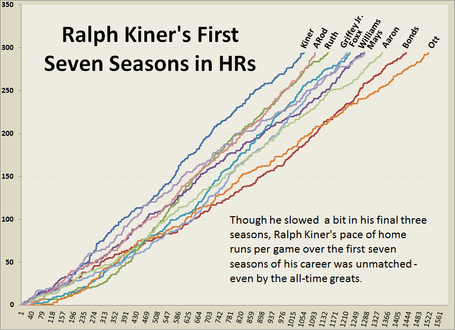 *NOTE: Kiner's per-game pace to reach 294 home runs was actually topped by both Ryan Howard and Juan Gonzalez; however, I wouldn't place either player in that same Hall of Fame-caliber class.