The likely Opening Day starter looks to continue what he did in the last couple months of 2013.

All things considered, last season could have been a lot worse for Jon Niese. The fact that he made 24 starts with a 3.71 ERA was encouraging, as he hit the disabled list in mid-June with a partial tear of the rotator cuff in his left shoulder. His overall numbers were down compared to the career year he had in 2012, but at least he returned to the rotation and remained healthy through the end of the year.

Like Dillon Gee, Niese had two very different parts of his season. Before he hit the DL in June, he made 14 starts with a 4.32 ERA and concerning peripherals: 49 strikeouts and 33 walks in 77 innings. After his return to action on August 11, Niese looked much more like his usual self. In 10 starts, he posted a 3.00 ERA with 56 strikeouts and 15 walks in 66 innings. In total, he had a 104 ERA-, which put him a bit below league average. 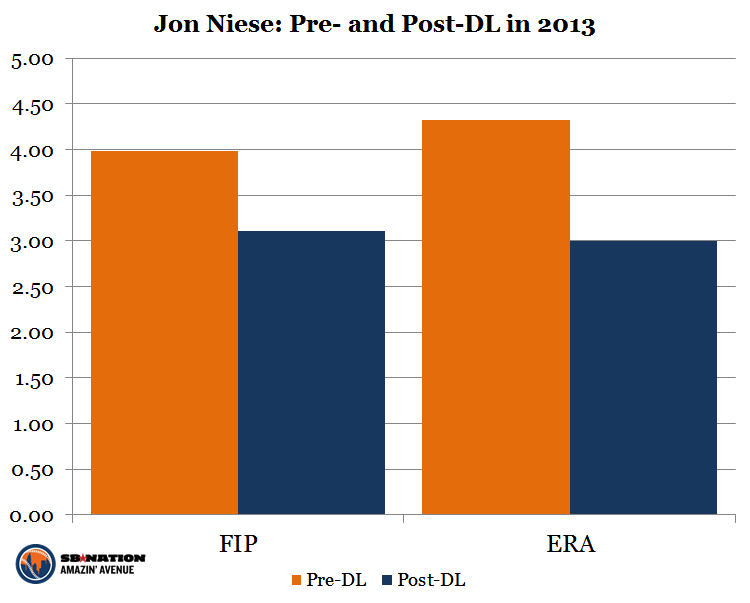 Going into the 2014 season, Niese could very well improve upon his numbers from last year, assuming he’s still as healthy as he was after his return. The popular projections predict an ERA between 3.62 and 3.98 with strikeout and walk rates in line with his career numbers. If he can match those rates, it wouldn’t be a surprise to see Niese outperform the ERA projections.

Of course, aside from his career year, Niese has always turned in an ERA a little higher than his FIP. And if there’s a knock on him, it’s that he has not yet thrown 200 innings or made more than 30 starts in a single season. Still, a return to 2012 form and potential breakout year doesn’t seem outlandish for the 27-year-old lefty.