The Mets have been unable or unwilling to move Ike Davis despite considering a trade at first base a priority this offseason. Will the former first rounder be a Met on Opening Day, and if he is, what should be expected from him?

If you had to bet on the most likely move the Mets would make this winter, it seemed like dealing a first baseman would have been a great choice. Fast forward to February, however, and the Mets still have both Ike Davis and Lucas Duda on their roster and appear poised to take both to camp. Fresh off another inconsistent season that saw him slump for three months and hit just .205/.326/.334 overall with a measly 9 home runs, Davis appears headed for a spring competition with Duda, assuming a trade doesn't materialize soon.

Mets fans have seen the downside of Davis's game throughout the first halves of 2012 and 2013. The prospect of a third straight year of Davis hitting below .200 for multiple months and flailing at breaking balls is a real and scary consideration, one that would likely torpedo any minimal value he currently holds on the trade market. Of course, then you can consider his second halves in those seasons and wonder if there's a chance that that guy can show up for a whole year. In 2012, it was a power explosion that buoyed Davis' numbers and made fans somewhat optimistic about a rebound, as he popped 20 home runs and put up an .888 OPS after the All-Star break. In 2013, it was a marked change in his on-base and contact abilities, as he hit .286/.449/.505 with more walks than strikeouts after he was recalled from Triple-A Las Vegas and before he suffered a season ending oblique injury. 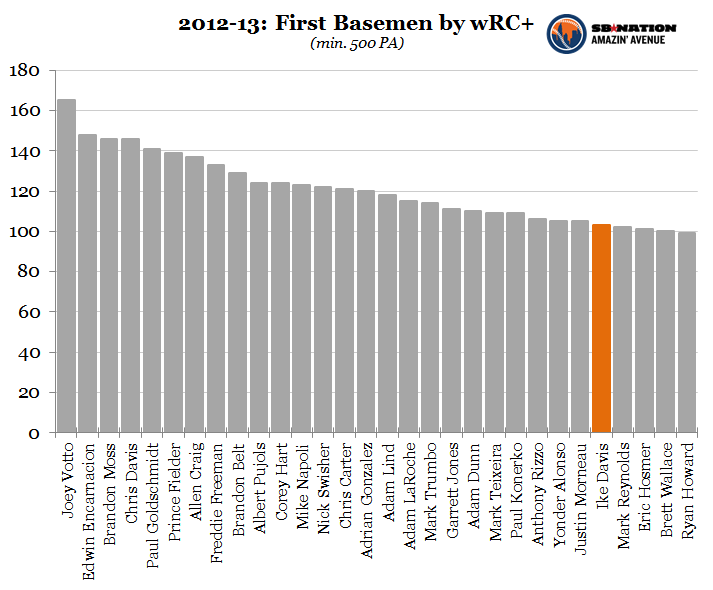 Among the things we do know about Davis is that he struggles to hit left-handed pitching. His .145/.203/.203 line against southpaws in 2013 was woeful and his career numbers against them aren't much better. Assuming he wins the starting job, it's likely he'll platoon with righty Josh Satin, who has a history of beating up on lefties in the minors and majors. We've also seen Davis' defensive skills slip a bit from his excellent rookie year, as both UZR and DRS have ranked Davis closer to average the last two seasons. Average defense at first base is fine, but it only ends up putting more pressure on his bat to perform.

It's the bat that will clearly determine whether Ike Davis is successful in 2014 and whether he should still be in the Mets' plans going forward. We've seen bursts of hitting ability in all four of his seasons in the majors leagues but he's never been able to put things together for an entire year. The ability is clearly there but for whatever reason, whether it be complicated swing mechanics, a lack of confidence, or Valley Fever, among other reasons, it has only come out in fits and spurts. The projection systems see a slight rebound in his offensive ability, though nothing all that special. If you're an optimist, maybe you believe his second half of 2013 is a corner turned. Maybe you believe that, at age 27 and entering his physical prime, Ike can do a complete transformation like the similarly named Chris Davis has done in Baltimore. If the Mets decide to roll the dice with Davis starting at first base once again, it seems like they'll have to be optimists, as well, or at least willing to make a tough bet.