Even with modest offensive projections, d'Arnaud should provide plenty of value in 2014.

The offseason flurry of top prospect lists have made one thing clear: The Mets have a ton of minor league pitching depth but relatively few bats. Fortunately, one of those offensive prospects is 25-year-old Travis d’Arnaud, and the Mets are ready to roll with him behind the plate for 2014.

d’Arnaud’s minor league performance impressed at least two front offices enough to trade him for a pair of major league aces in Roy Halladay and Mets great R.A. Dickey. His career minor league numbers stand at .286/.347/.476, which are particularly encouraging considering his position, some early career struggles, and his scout-approved defense.

With replacement-level at catcher so low, d’Arnaud is a safe bet to be valuable to the Mets in 2014, even if his numbers don’t immediately turn any heads. For example, ZiPS projects d’Arnaud to hit only .245/.307/.392 in 366 plate appearances, with slightly below average defense, but still projects 1.6 WAR. 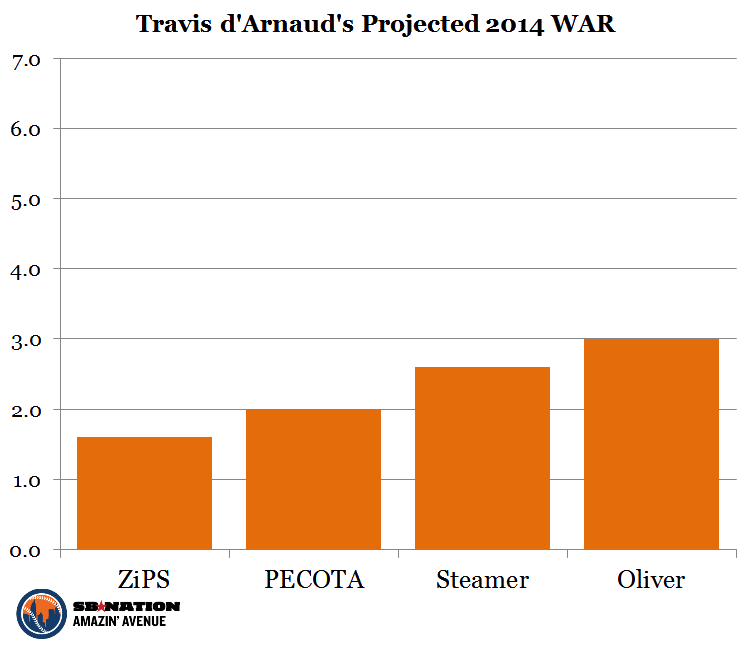 Understandably, ZiPS doesn’t expect Travis to stay on the field enough to produce more value than that, but even as the most negative projection, a 1.6 WAR season isn’t a bad place to start. The other projections give d’Arnaud a bit more credit. Steamer projects d’Arnaud to hit .254/.320/.418 over 431 plate appearances, with plus defense and 2.6 WAR. Meanwhile, Oliver projects worse offense (.241/.312/.397) over its standard 600 plate appearances, but even better defense than Steamer, and 3.1 WAR.

The big hurdle for Travis remains his health. The projections, scouts, and numbers say that d’Arnaud can be a reliable everyday catcher right now. If he stays healthy, there might be several All-Star Game appearances in his future. The 2014 Mets have a roster full of wait-and-see guys as the organization prepares for even bigger and better things with the return of Matt Harvey in 2015. The most important thing for Travis d’Arnaud is to play as often as possible and avoid the disabled list. If he can do that, all signs point to everything else falling into place.