The first of Sandy Alderson’s three major league signings this winter, Chris Young had his worst big league season in years in 2013. With 0.5 fWAR and 0.0 bWAR in 375 plate appearances for the Oakland Athletics, Young wasn’t nearly as valuable as he had been with the Diamondbacks from 2010 through 2012.

The good news is that Young is still just 30 years old. At his best, Young has been a home run hitter who draws walks, runs the bases fairly well, and plays excellent defense in the outfield. Almost exclusively a center fielder as a professional baseball player, Young figures to wind up in a corner for the 2014 Mets, at least as long as the team plays Juan Lagares regularly. If Terry Collins ends up playing Eric Young Jr. in a corner, Chris Young would be the heavy favorite to play center. 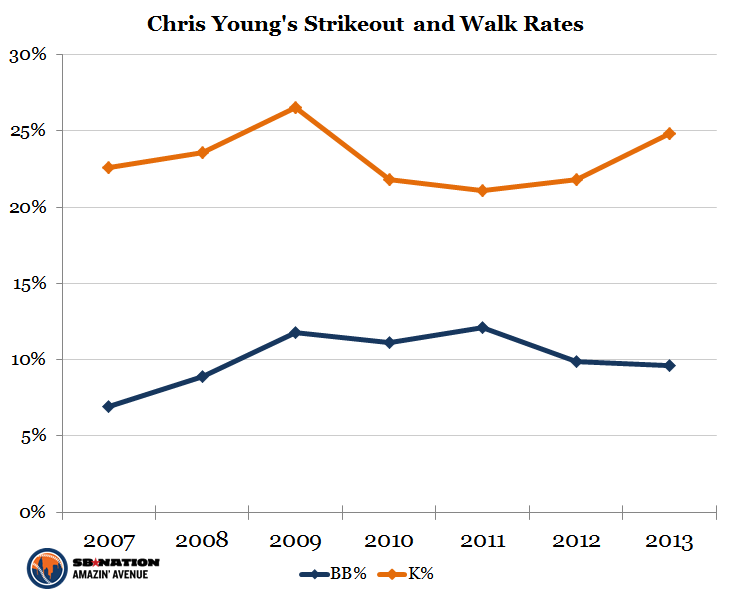 Shortly after the Mets signed Young, Sandy Alderson told reporters that Young could return to his all-star caliber performance with regular playing time this year. A major league regular since 2007, last year wasn’t Young’s first mediocre season by WAR. In four of his seven major league seasons, though, he’s been worth at least 2.0 fWAR and 1.4 bWAR. That might not sound like much, but only Marlon Byrd and Juan Lagares exceeded those numbers for the Mets last year.

As for projections, ZiPS and PECOTA peg Young as at least a 2.5 WAR player in just under 500 plate appearances. Steamer (1.4 WAR, 564 PA) and Oliver (2.5 WAR, 600 PA) aren’t quite as high on his value, but none of the systems predict a repeat of 2013 this season. If he can meet even the lowest of those expectations, he’ll be worth his $7.25 million contract with the Mets.