Will The Farns provide the relief innings and veteran bullpen presence the Mets need?

Right-handed reliever Kyle Farnsworth is best known for two things: using his large frame to hurl a baseball in the mid-90s and using it to tackle Paul Wilson. Earlier this month, the Mets signed him to minor league deal with a spring training invite in hopes that he will do at least one of those things effectively.

It was an off year for Farnsworth in 2013. Between his time with the Tampa Bay Rays and the Pittsburgh Pirates, he threw 38.1 innings in 48 appearances, compiling an ugly 4.70 ERA and a 4.14 FIP. His last truly good season came in 2011. As Jeffrey Bellone noted, Farnsworth has been experiencing a gradual decline in velocity. While there isn't an overwhelming correlation between his fastball velocity and on-field results, the change is important for a guy who doesn't rely on wipe-out secondary offerings or pinpoint command. 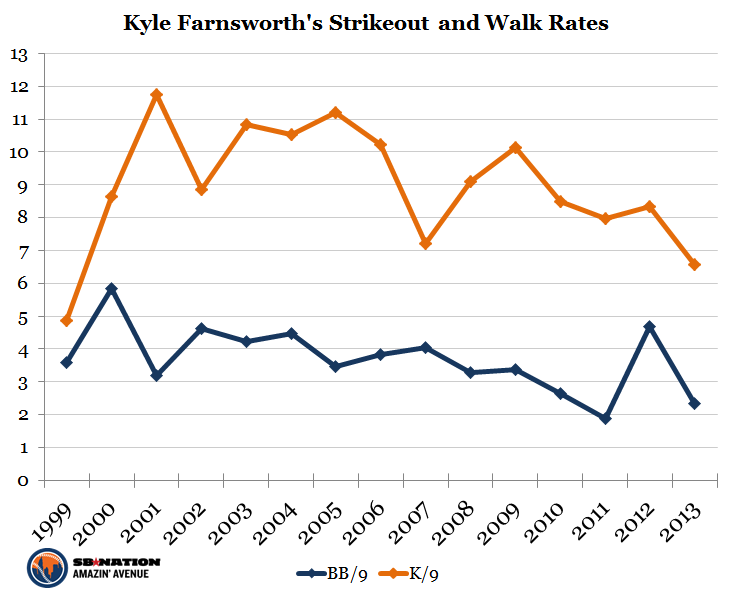 The two projections on Farnsworth's Fangraphs page have him pitching between 40 and 44 innings and posting an ERA of 3.62 or 3.64 with a FIP of 3.74 or 3.77. While it would certainly be great to see him log more innings, those seem like reasonable expectations. What does appear likely is that Farnsworth will provide some solid relief innings for a club that doesn't have a wealth of bullpen depth.