A group chock full of high-profile names showcases the many ways an organization can acquire top-tier talent.

Welcome back to the ongoing Mets Top 25 Prospect series, where we are down to the last five names before we reach the top ten.

This is perhaps the most disparate group in the rankings, featuring a little bit of everything from both sides of the ball. It's also an interesting statement on the art/science of player acquisition, featuring names that represent large capital investments as well as others that represent great values.

Of course, it wouldn't be a Mets ranking if it wasn't notable for it's very intriguing right-handed pitching. That said, in terms of upside it might be a pair of shortstops that could climb the highest in the long run.

On to the rankings: 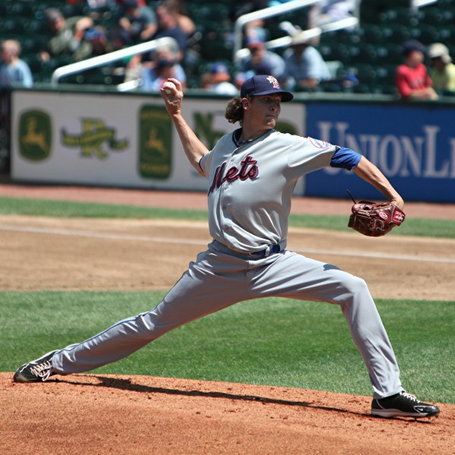 Drafted by the Mets in the ninth round of the 2010 MLB Amateur Draft (Stetson University).

The 25-year-old righty has had an interesting journey to this point: As a two-way player in college he was behind the pitching curve to begin with. Then Tommy John surgery in 2010 set him back even further. Yet for someone with far fewer professional innings than guys like Domingo Tapia and Gabriel Ynoa, deGrom still currently teeters on the edge of the show. The long righty has capitalized on basically just two pro seasons on the mound and following a solid Triple-A debut where he posted a 4.52 ERA (3.56 FIP) in 14 starts the former 2010 ninth-rounder seems poised to appear at the major league level in 2014. Granted deGrom is likely no. seven or eight, at best, on the organizational depth chart, so he'll either have to dominate or hope for some injuries to log significant innings in Queens this summer.

That said, the fact that deGrom is becoming more of a sure thing to remain a starter at the next level is a victory in itself. Based on his advanced age and extreme lack of mound time there were natural discussions about an inevitable move to late relief where his mid-90s fastball might be able to dominate. And yet, he has developed enough consistency in the slider -- sometimes called a curve -- to project an average major league offering and shows good feel for his change-up. What's more, he uses his lanky 6'4", 185 lbs frame well, utilizing clean mechanics and holding velocity late into games. While solid but unspectacular swing-and-miss rates (19% in '13) don't point to a top of the rotation guy, deGrom could represent just the kind of talented mid-rotation starter that the Mets have lacked beyond their upper crust of pitching prospects for the better part of a decade; in the Omar era this player was named Dillon Owen and Tobi Stoner.

"At a cursory glance, deGrom had a very successful 2013 season. He reached the cusp of the major leagues-- and probably would have gotten a September call up if he hadn't hit his innings limit-- after starting the season in Advanced-A ball. However, there are some warning signs here. He didn't really dominate younger competition at any of the three levels he pitched, and the Mets had him scrap his slider in Vegas for a curveball. The slider didn't always show up every sixth day, but flashed solid-average at times, and it is difficult to expect him to learn a new breaking ball (even if they say it is more of a tweak) on the job. Still, expect deGrom to help at the major league level this year with his two solid-average fastballs and wonderful hair." 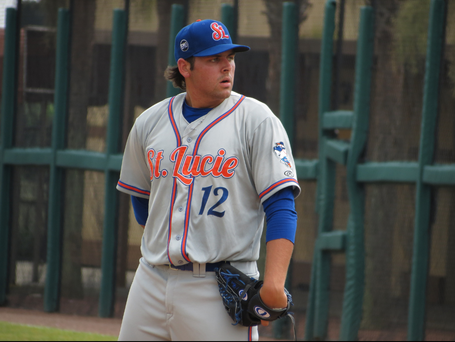 Drafted by the Mets in the first round of the 2011 MLB Amateur Draft (Deer Creek HS - OK).

2013 was was something of a lost year for the 2011 first-rounder, who started the season late due to a spring training surgery to repair the meniscus in his knee and shut it down early due to a shoulder injury suffered on a comebacker in August. There was also the mention of a biceps strain around the time he made his final start. In short, it's pretty clear that the 20-year-old just could never get on track in 2013 and the club decided to pull the plug before anything worse happened. Despite that, he remains one of the more exciting young arms in the Mets system with perhaps the best combination of stuff, size, and projectability of anyone not named Harvey, Wheeler, or Syndergaard.

"Surgery on a ligament in his right knee cost Fulmer most of the 2013 season, but most if not all of the potential we saw in him last year is still there. The right-hander made nine starts and looked fine in them, so expect a healthy Fulmer in 2014. The youngster will continue refining his mechanics and delivery, and it's scary to think about his potential if he makes them as effective as possible, boosting his game - he already boasts a mid-90s fastball and an advanced slider to begin with." 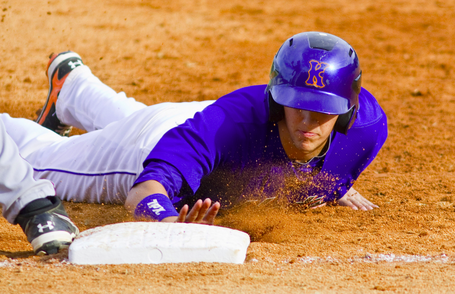 Drafted by the Mets in the first round of the 2012 MLB Amateur Draft (Alfred M. Barbe HS - LA).

While it's still probably too soon for the air of disappointment materializing around him, Cecchini certainly hasn't done much to endear himself to the fanbase since the Mets braintrust saw fit to draft him 12th overall in 2012. Through two (short) seasons he has a .256 career average with 12 total extra-base hits, shaky plate discipline, and he's been caught stealing as many times as he's been successful (seven). Part of the problem has been health, as he's missed about 30% of his games as a pro; however, that in itself has to be considered a concern.

In short, the idea of a player with few weaknesses and a high floor has given way to an overall lack of tools and a low ceiling. It's fair to wonder if the club dreamed of a player that hedged the risk inherent in drafting a prep product with the capability (read, safety net) to field a premium position at the highest levels. And to be fair, in a weak draft class reports of a potentially plus hit tool at the age of 17 provided upside to dream on -- and still does. Unfortunately, the bat has been relatively underwhelming and without that, there really aren't any other tools on the offensive side worth mentioning. The defense seems fine at short, but 12-overall is a high price to pay for a defense-first middle infielder this far from the majors. On the bright side, he'll still likely be a 20-year-old in Savannah next season, placing him over a year ahead of the development curve with plenty of the requisite pedigree and makeup to move forward. 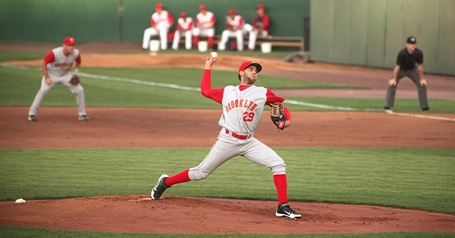 Signed with the Mets as in international free agent on November 9, 2009 (La Vega, Dominican Republic).

Ynoa was nothing short of the best pitcher on the Savannah staff this summer and one of the better players in the entire farm system in 2013, posting a 2.72 ERA with a preposterous 16 walks in over 135 innings pitched. After an impressive 2012 where he starred as the youngest starter on a standout staff in Brooklyn, he took the next step by showing that his superb command of strong stuff was more than enough for full-season baseball. In fact, with a fastball that lives in the low-90s and a very advanced secondary repertoire it's becoming clearer and clearer that the 20-year-old has a relatively strong chance to start games at the highest levels.

The problem here is that he doesn't boast any plus offerings. Though he currently generates some swing-and-miss by hitting his spots and fooling A-ball hitters with a highly advanced change-up, he likely will not be a strikeout artist against superior competition unless he finds a couple more ticks on a mostly average fastball. Therefore, the ceiling isn't necessarily at the top of a rotation. Instead, he figures in as more of a back half of the rotation innings-eater, known more for his excellent command, well-developed off-speed mix, and excellent approach to pitching -- not unlike a Dillon Gee.

"There's probably an argument for having Ynoa ahead of Matz. He's a full two years younger and has the better present-day secondary offerings. The overall arsenal projects to just solid-average though, and the Florida State League will be a good test of the fastball command and his still-developing breaking ball. He also needs to improve his facial hair game. The comps to Rafael Montero are a bit lazy, but mostly valid. And like Montero, Ynoa has the potential to be a mid-rotation starter."

"I might be higher on him than many others, but there is so much to like about Ynoa. His fastball already sits in the low-to-mid 90s, his off-speed offerings are very advanced, and at 21, both have room to further improve. With the graduation of other prospects in the system and his own maturation during the 2014 season, I am predicting Ynoa makes most Mets Top 10 prospect lists for 2015."

Signed with the Mets as in international free agent on July 2nd, 2012 (Dominican Republic).

Kingsport was a rather aggressive assignment for the 17-year-old who was the youngest everyday player in the Appalachian League -- a move that speaks volumes about the organization's impression of the talented young player. With that in mind, the fact that he was able to post a very strong .118 ISO while placing himself among the team leaders in extra-base hits in his pro debut -- again, at age 17 -- is outstanding. That said, the most important thing about Rosario's season took place from a scouting perspective, where talent evaluators walked away largely impressed. The power he showcased is considered just a preview of what his lithe, lanky frame (6'2", 170 lbs) will generate as he fills out, and though he's not a burner by any means he featured the kind of quickness and actions at shortstop that advocates feel will allow him to stick at the position at the highest levels. That's pretty much the long-term value proposition that had the Mets coughing up $1.75 million for the young Dominican's services.

But be forewarned: Rosario is the epitome of a project -- raw and unrefined and light-years from the show. While athletic, he isn't a complete toolshed so it's easy to come away less than impressed on the wrong day -- as we saw in Jeff's first-hand report. Conversely, the ability is obviously in there there so that on the right day, it's possible to see a player that may take the mantle as the club's best infield prospect since Reyes -- as we saw in a first-hand report over at Fangraphs (based on a viewing where he hit an impressive oppo shot). In short, the Mets newest young IFA bonus baby didn't necessarily blow anyone away with his stat line, but he showed enough between the lines to make scouts extremely bullish about his long-term potential.